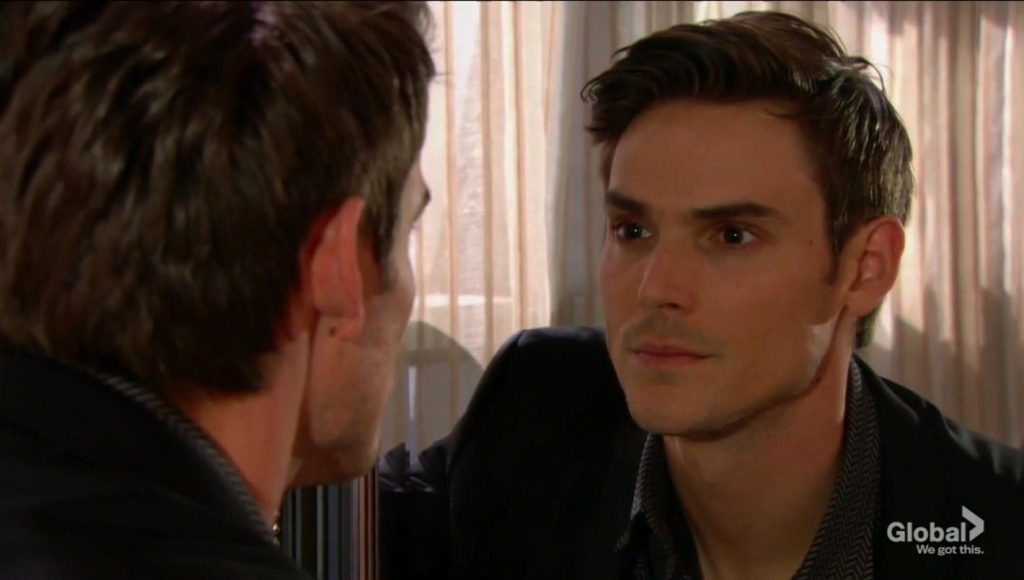 The Young and the Restless (Y&R)  spoilers for Tuesday, September 24, tease that Nikki Newman (Melody Thomas Scott) will lament to Victor Newman (Eric Braeden) that Adam Newman (Mark Grossman) must have planned to kill him, then frame Victoria Newman (Amelia Heinle) from the get-go. Victor will say that he thought he was setting a trap, but ultimately put his family in jeopardy. Billy Abbott (Jason Thompson) will then arrive, angry about how Victor’s plan ended up with Victoria getting arrested.

Billy will rant and rave for a while but ultimately apologize for his outburst. Victoria will then call, and she’ll urge her family not to do anything until she’s been released. Billy will again get agitated – he just won’t trust Adam. Later, Victoria will arrive, and Billy will want them to call off the ruse of Victor’s death, but she’ll want to keep going since they have Adam where they want him. They’ll all agree to keep the ruse going, but Billy won’t be happy about it.

Next on Y&R, at Crimson Lights, Sharon Newman (Sharon Case) will discuss Victoria’s arrest with Rey Rosales (Jordi Vilasuso). He’ll discuss the evidence against Victoria, but he’ll still think that Adam is behind all of it. Sharon won’t be convinced, and they’ll go back and forth about it.

She’ll even wonder whether Rey should be on the case since he’s biased against Adam. Sharon won’t think that Adam wanted his father dead, but Rey will point out that Adam declared war on his family. Finally, Rey will tell Sharon that she can’t change Adam.

Next on Y&R, Adam will lament about Victor’s death alone at his penthouse. He’ll talk to himself as he reads a news article on Victor’s death and Victoria’s arrest. Clearly, he’ll be tormented by his father’s death, but he’ll also express deep resentment toward Victor as he flashes back to meeting “Mr. Newman” as a child. He’ll wonder what might have been had he known that Victor was his father from an early age. Adam will do a lot of thinking out loud and he’ll openly wonder whether he really wanted his father gone.

Later, Sharon will arrive at the penthouse, and Adam will ask why she’s there. “Because you need me,” she’ll say.

Young And The Restless #YR Weekly Spoilers September 23 to 27: Victor Is Alive And Well – Michael Confesses To Lauren @celebratesoaps https://t.co/PRClC4Vkk1

Next on Y&R, Jack Abbott (Peter Bergman) and Traci Abbott (Beth Maitland) will express their surprise over Victoria’s arrest for Victor’s murder. They’ll go back and forth about whether she could be capable of murder, and Traci will think that Paul Williams (Doug Davidson) wouldn’t arrest her for no reason. But Jack will think there is surely more to the story – after all, he’s known Victoria since she was small.

Later, in Chancellor Park, Jack will talk to Dina Mergeron (Marla Adams), who will remain silent. He’ll talk about Victor’s death and note the similarities between her and Victor. They’ll get cookies and Jack will tell Dina about his recent trip where he was searching for himself. He’ll remark that he got a new perspective on her and her life, and how she wanted more and went after it. Jack will apologize for judging her and tell her that he loves her, and she’ll suddenly be aware and tell him that she loves him, too.

Finally, on Tuesday’s new episode of Y&R, Jack will return home and relay the conversation with Dina and her reaction to Traci. He’ll say that theirs is an incredible story and that he wants to memorialize the story of their family. He’ll ask Traci for her help – she’ll think it’s a great idea.