The Young and the Restless (Y&R) spoilers for Wednesday, September 18, tease that Nikki Newman (Melody Thomas Scott), Summer Newman (Hunter King), Nick Newman (Joshua Morrow), and Abby Newman (Melissa Ordway) will discuss what’s happened to Victor Newman (Eric Braeden) at the Newman Ranch. Nate Hastings (Sean Dominic) will let everyone know that he instructed the hospital staff to refrain from talking to the press until all of the family have been notified. Nick will try to find Victoria Newman (Amelia Heinle).

Meanwhile, Chelsea Lawson (Melissa Claire Egan) will arrive at Adam Newman’s (Mark Grossman) penthouse, upset that he blew off a visit with Connor Newman (Judah Mackey). Adam will relay that Victor died, and Chelsea will reel from the news. Chelsea will think that Adam shouldn’t be alone, and Adam will gripe about Nick throwing him out of the house. Once Chelsea leaves, Adam will think about calling Sharon Newman (Sharon Case), but he won’t.

Next on Y&R, Phyllis Summers (Michelle Stafford) will show up at Adam’s penthouse. He’ll have been drinking and will be abrupt with her. Adam won’t want her sympathy, but Phyllis will observe that he’s clearly not. They’ll discuss Adam tampering with Victor’s meds, and Phyllis will doubt that it killed him. Things will eventually devolve between them, and Phyllis will get irked when Adam accuses her of wanting Nick. She’ll leave, then immediately text Nick asking if they can talk. 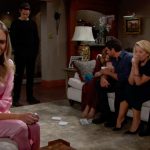 Next on Y&R, at Crimson Lights, Kevin Fisher (Greg Rikaart) and Chloe Mitchell (Elizabeth Hendrickson) will have coffee, and Kevin will learn from a call from Michael Baldwin (Christian LeBlanc) saying that Victor has died. Kevin will relay the news to Chloe, and ultimately they’ll decide to go tell Victoria the terrible news even though she’s with Billy Abbott (Jason Thompson).

Meanwhile, at the boathouse, Billy and Victoria will discuss his recent ordeal. He’ll let Victoria know what happened while he was being visited by the apparitions, and he’ll say that he was able to fight off the dark side of himself because she believes in him. Billy will be ready to go home, and Victoria will say that he needs to seek professional help. Kevin and Chloe will then arrive and learn about Billy’s battle with himself.

Kevin will then tell Victoria about Victor’s death, and at first, she’ll be in denial and accuse him of lying, but soon she’ll break down and decide that she’s got to go home. Billy will insist on going with her. Later, at the Newman Ranch, Nick will get Phyllis’ text and then return to the family. Once everyone leaves, Victoria will arrive and have a tearful embrace with Nikki.

Next on Y&R, at Society, Summer, Abby, and Nate will talk about how strange it is that nobody else knows about Victor’s death. And at Nick’s house, he’ll get comfort from Chelsea, who will soon learn that Nick suspects that Adam may be involved in Victor’s death.

Billy's heartbreaking battle with his alter will be the spotlight on Tuesday's standalone #YR episode. #YoungandRestlesshttps://t.co/3pQObwoWlW

Finally, on Wednesday’s new episode of Y&R, Michael will arrive at Adam’s penthouse. He’ll ask whether Adam had something to do with Victor’s death, and he’ll wonder if Adam plans on dragging him into it. Adam’s response won’t be committal, and Michael will leave.