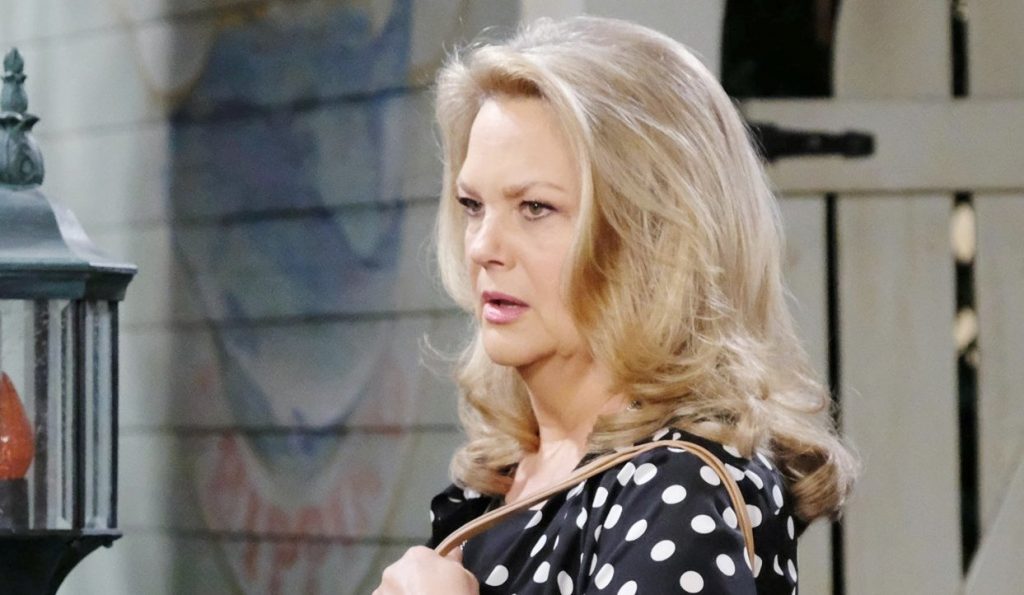 Days of Our Lives (DOOL) spoilers for Wednesday, September 18 tease another exciting day of drama and tense situations for the viewers as the drama continues among the Salemites!

Anna DiMera (Leann Hunley) pleads with Kristen DiMera for help, wanting her to come clean and tell the truth about how Ted Laurent (Gilles Marini) was really killed! Tony DiMera (Thaao Penghlis) currently sits in the Salem Police Department jail, waiting for his trial date to come up for murder. As Days of Our Lives viewers know, it was an accidental shooting or self-defense at least; Tony and Ted got into a struggle with the gun when Ted tried to shoot Kristen, and the gun went off. Anna will continue to want her Tony free and not awaiting a possible death sentence!

Brady Black (Eric Martsolf) has a man to man talk with his father, John Black (Drake Hogestyn) about Kristen. In a recent episode, Kristen lured Brady to her hotel room and tried to seduce him, and got him to drink just a little bit of champagne but wanted him to drink more!

It was obvious to viewers that Kristen was trying to get Brady drunk, and taking advantage of his recovered alcoholism to get her way with him. Brady did manage to back away from her and the champagne, and went to a bar afterward and ordered coffee! Brady will talk to his dad about his attractions to Kristen and having slightly fell off the wagon with that sip of champagne – although it was more like being pulled off the wagon!

Jennifer Horton (Melissa Reeves) is held against her will and bound and gagged, as shown in the Days of Our Lives weekly preview. Viewers will recall from Monday’s episode that a figure dressed all in black including black gloves snuck in behind her as she was cleaning up the lab she’d had set up for Dr. Wilhelm Rolf (William Utay) and grabbed a scalpel and threatened her with it!

Eve Donovan Deveraux (Kassie DePaiva) was the most likely suspect for trashing the lab, which Jennifer had been cleaning up when she was abducted, but when Jack Deveraux (Matthew Ashford) confronted her with it, she denied it vehemently!

As viewers will recall, the last time that Jordan was in Salem, she kidnapped Ciara, tied her to a bed in the same cabin where Ben rescued her from when Claire Brady (Olivia Rose Keegan) was shown to have set it afire with Ciara in it and proceeded to set it on fire again!

She also had kidnapped Chad and Abigail DiMera’s (Billy Flynn, Kate Mansi) baby girl Charlotte DiMera (Chloe Teperman) and had her in the cabin along with Ciara, but at least she didn’t leave the baby in the cabin when she set it on fire! Ben and Ciara will not only be shocked but probably scared!

Stay tuned to Days of Our Lives and keep checking DOOL spoilers frequently for all the latest news, updates, and developments!