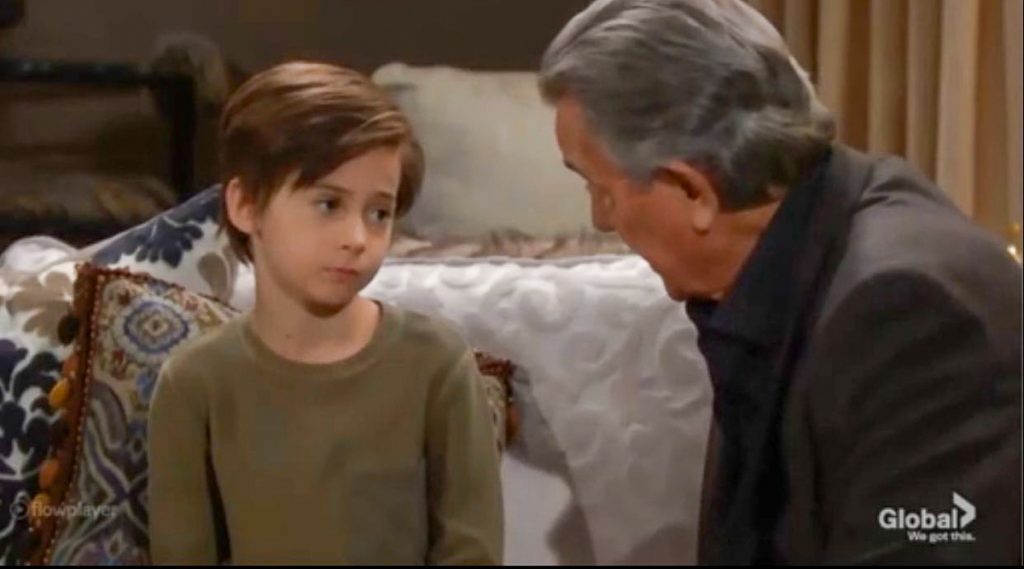 The Young and the Restless spoilers for Tuesday, October 22, tease that Chelsea Lawson (Melissa Claire Egan) will text Nick Newman (Joshua Morrow), who will be in Las Vegas trying to track Adam Newman (Mark Grossman) down. Nick will text back that he’s at Adam’s hotel room door. Adam will unhappily greet Nick at the door with a sigh and say that Nick shouldn’t have come.

Adam will declare that he’s done with Genoa City and the Newmans, and Nick will tell him that he needs to come home for his son, who’s in trouble. They’ll argue about familiar territory, and Adam will say that he’d have just hurt Connor Newman (Judah Mackey) more if he had stayed. Adam will needle Nick about his relationship with Chelsea a bit, and Nick will admit that he hasn’t been able to take Connor’s place, but that Adam needs to listen to what Connor has been doing.

The Young and the Restless Spoilers – Newman Visits With His Grandfather

Next on Y&R, Chelsea will take Connor to the Newman Ranch. Victor will greet his grandson, then apologize to him about pretending to be dead. Connor will be pretty glum about the whole thing, despite getting a present from Victor. When Connor goes to get a snack, Victor will notice that Connor doesn’t seem like himself. Chelsea won’t understand the relationship between Adam and Victor, and Victor will try to explain.

Victor will opine that he’s certain that Adam will never come back, which will upset Chelsea for Connor’s sake. Victor will pledge to do what he must, including making an apology, but Chelsea will say that she’s taking steps to bring Adam back. Victor will be surprised and will ask Chelsea to make sure that Connor knows that his father loves him. Connor will return and Victor will tenderly tell him to hang in there, and Chelsea, too.

Next on Y&R, at the Abbott estate, Jack Abbott (Peter Bergman) and Traci Abbott (Beth Maitland) will prepare for a visit with Dina Mergeron (Marla Adams) at the house. They’ll plan to ask her about Stuart Brooks (Robert Colbert) if she’s having a good day. Later, Dina will arrive, and they’ll talk, then Traci will read the letter from Dina to Stuart. Dina will tear up and say that “that was a wonderful and terrible night.”

At that point, Traci and Jack will back off, but Dina will be upset and will say that she wants to go home. After Dina is back at the memory care facility, Jack and Traci will continue discussing family history – Traci will have found an invitation to Dina’s senior prom, and it will look like Stuart was Dina’s date, and the after party was at the Abbott estate. Jack and Traci will be intrigued.

Next on Y&R, at Crimson Lights, Esther Valentine (Kate Linder) will arrive to talk with Cane Ashby (Daniel Goddard) and Jill Abbott (Jess Walton) about Katherine Chancellor’s (Jeanne Cooper) will. They’ll discuss the current situation – that no one can legally contest the will and everyone’s at a stalemate. Cane will say that he and Jill have hired a forensic document expert to look over the will pages that Cane brought back from Las Vegas along with the will pages that gave Devon Katherine’s fortune.

Cane will then tell the ladies the story about how he got a text from Chance Chancellor (John Driscoll), then got knocked out and awoke to find a note from Chance saying he was deep under cover and had to stay off the radar. Jill will say that something is very fishy, and they’ll all agree that they need to find out which pages are real. Later, the forensic document expert will arrive.

The expert will determine that Katherine’s initials on the new pages were authentic, and that the initials on Devon’s version of the will were forged. Cane won’t think that any of this makes sense, since he’s not blood family. But Jill will be more gung-ho about Cane getting the money, and she’ll blast Tucker McCall (Stephen Nichols) for his role in this whole thing. They’ll all determine that Devon needs to be told about the development, which will really make Cane uncomfortable.

Finally, on Tuesday’s new episode of Y&R, back in Adam’s Vegas hotel room, Nick will explain the recent problems with Connor, which will upset Adam, but he’ll think that the big mistake was coming back into Connor’s life. Nick will impress upon Adam that Connor needs him and has been trying to text and call him. Adam will still say that he’s not going back to Genoa City. That will lead to more arguing, and Adam will insist that Nick leave, which he’ll be about to do when he gets a call from Chelsea.

Chelsea will be upset and tell Nick that Connor climbed to the top of the jungle gym, declared himself invincible, and jumped off. Turns out, he’ll have broken his arm – Adam will be horrified to hear this part of the conversation. Nick will turn to Adam and ask him if he still thinks that he doesn’t need to come home.