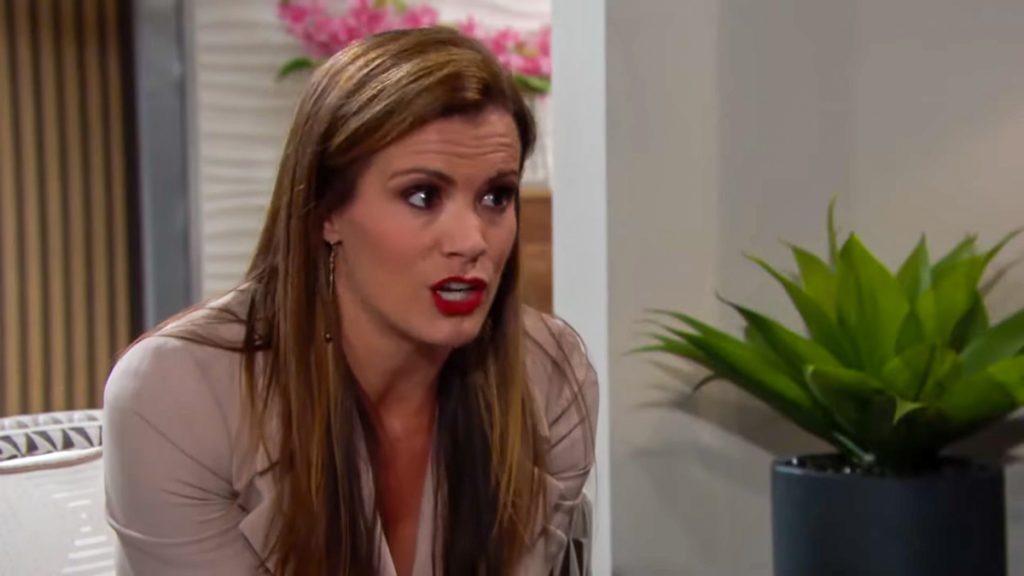 The Young and the Restless spoilers for Tuesday, October 15, tease that Phyllis Summers (Michelle Stafford) will be hard at work at Crimson Lights trying to locate Cane Ashby (Daniel Goddard). She’ll pretend to be his assistant, his wife, and his girlfriend, but she’ll have no luck.

Meanwhile, at Nick Newman’s (Joshua Morrow) house, he and Chelsea Lawson (Melissa Claire Egan) will discuss how Connor Newman (Judah Mackey) said that he broke his lamp by accident. Chelsea will be feeling like a failure as a mom, when Summer Newman (Hunter King) appears and says that none of this is her fault.

After Chelsea leaves, Summer will inform Nick that Phyllis is off the grid again and that she’s been fighting with Theo Vanderway (Tyler Johnson). She’ll note that Jabot is the only place where she feels useful.

Next on Y&R, Kyle Abbott (Michael Mealor) and Lola Abbott (Sasha Calle) will look at photos of Lola’s new nephew, then talk about how there’s a lot they want to do before they start a family of their own. They’ll discuss what’s been going on at Jabot, and Kyle will note that she doesn’t know what it’s like to feel like you have to prove yourself to your family repeatedly like he and Summer do.

Later, Kyle and Lola will discuss her conversation with Theo, and Lola will mention how Theo passed out in the kitchen at Society. Kyle will be peeved that he’s just now hearing about this, but Lola will say it’s not a big deal. Kyle will point out that Theo is a manipulator, and Lola will wonder if Kyle trusts her.

Next on Y&R, Devon Hamilton (Bryton James) will tell Elena Dawson (Brytni Sarpy) about his visit with Tucker McCall’s (Stephen Nichols) assistant. The assistant said that things had become weird with Tucker, and that he went on a spiritual journey after some rant about technology. Elena will think that it sounds like a phobia or perhaps electromagnetic hypersensitivity.

Devon will say that Tucker didn’t leave any instructions in his absence, and that the company is facing a meltdown. Elena will say she has plan to cheer him up.

Back at Crimson Lights, Devon will talk with Nick a bit, saying that he’d like to double his investment in New Hope. Nikki Newman (Melody Thomas Scott) and Sharon Newman (Sharon Case) will arrive and talk about Nick possibly running for office will come up. Nick will say that he’s not running and eventually he’ll get a call from Chelsea to come home.

Meanwhile, on the patio, Phyllis will pretend to be Jill Abbott (Jess Walton) on the phone and she’ll find out that Cane hasn’t filed a flight plan to come home. She’ll wonder what he’s up to, and Sharon will come by and trade barbs with Phyllis over Adam Newman (Mark Grossman).

Next on Y&R, Theo will arrive at Jabot, but Summer won’t want to talk with him. He’ll admit that he’s been a jerk, but Summer won’t be interested in taking him back. She’ll even say that Kyle convinced her that she deserves better. Still, Theo will think that he can step up to the challenge. Summer will reply that she doesn’t want to change him, and that he should stop blaming the rest of the world for his shortcomings.

Theo will then launch into a tirade about Kyle, and Summer will be irritated. Theo will discuss having to fight for what he has, but he’ll admit that he takes things too far and that he wants to change his ways.

Is it possible that Chance is not behind the will challenge on #YR?

Read more details on this #YoungandRestless scoop below ⬇️https://t.co/RcdqAqqrL3

Meanwhile, at Nick’s house, Chelsea will relay to Nick that Connor was in a fight at school. Nick will talk with Connor who will yell that Nick’s not his father. He’ll then call Chelsea a liar and complain that he wants his father.

Back at Crimson Lights, Phyllis will still be bickering with Sharon over Adam. Sharon will then get a call from Chelsea, who will want to locate Adam for Connor. Sharon won’t know how to reach Adam, but she’ll know who can. She’ll talk a bit more with Sharon and realize that Adam must be back in Las Vegas.

At The Grand Phoenix, Elena and Devon will enter a room. She’ll say that she knows that he missed the jazz festival, so she is going to bring it to him. Devon will be thrilled that she has a recording of the whole festival. They’ll happily kiss.

Finally, on Tuesday’s episode of Y&R, Adam will get a call from Chelsea, but he won’t answer it. She’ll leave a voicemail saying that Connor needs him, but Adam won’t listen to the message. Instead, he’ll call Riza Thompson (Tina Casciani) and ask her to get him back into the action. He’ll comment that there’s nothing for him back home.