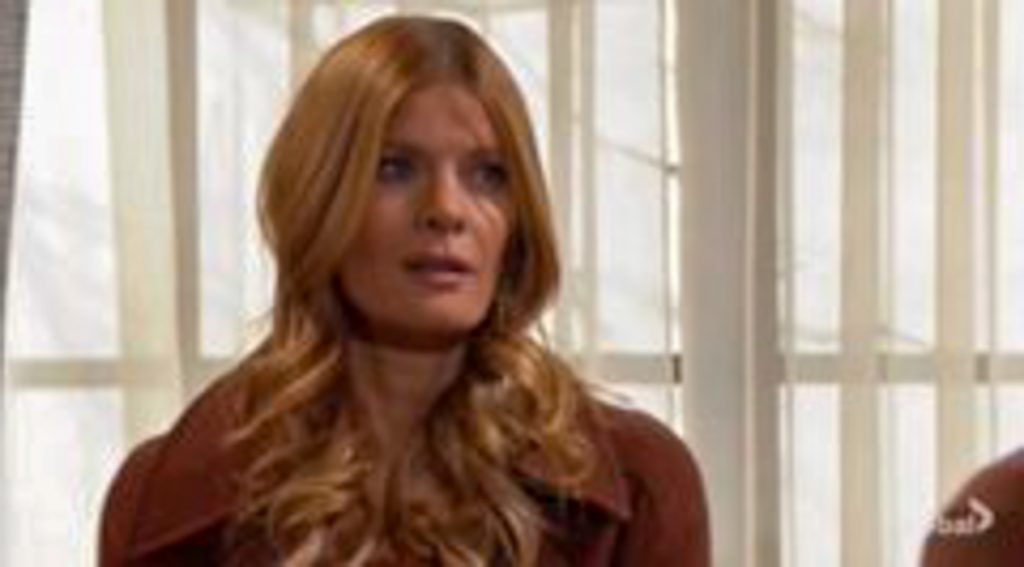 The Young and the Restless (Y&R) spoilers for Thursday, December 26, tease that Victoria Newman (Amelia Heinle) will be excited about her holiday getaway with Billy Abbott (Jason Thompson) and the kids. At the Grand Phoenix, the couple talks about their upcoming flight and how Victoria wants everything to be perfect. Moments later, Amanda walks over to introduce herself to Victoria.

It doesn’t take long for Victoria to suspect that Billy already knows Amanda, so he admits they’ve bumped into each other around town. At home, Summer Newman’s (Hunter King) agitated about Adam Newman (Mark Grossman) attending the Christmas gathering. She feels like Adam will ruin everything, but Nick feels like Summer can deal with it.

Summer calls Phyllis Summers (Michelle Stafford) to bring her up to speed, and Phyllis knows exactly what she has to do. Soon after, Phyllis offers to buy Amanda a drink. Amanda comments on how she hasn’t had to buy too many of her own lately. Phyllis thinks there must be a man in the picture and wants Amanda to spill, but Amanda doesn’t divulge details.

Next, Phyllis heads over to Nick’s place and announces she won’t be attending the gathering after all. After Phyllis blames Adam, Nick wonders what his brother did now. He revs up the pressure until Phyllis reveals that Adam urged her to seduce Nick. She confirms that it was part of Adam’s plot to win Chelsea Lawson (Melissa Claire Egan) back.

Nick is appalled and thinks Phyllis should’ve told him sooner, so she gets defensive. Phyllis suggests Nick is questioning her motives, but he backs down and is grateful she came clean. Nick intends to use this as ammunition against Adam and warns his brother won’t win this time.

At the penthouse, Adam and Chelsea talk about going overboard on Connor Newman’s (Judah Mackey) gifts. Chelsea’s amazed by how normal all this feels, but the mood shifts after Adam brings up Hope Wilson’s (Beth Toussaint) farm. He wants to take Chelsea and Connor there tomorrow, but Chelsea thinks it’s just a way to avoid Nick.

Adam counters that Chelsea’s afraid of what she’ll feel at the farm. He believes there’s still a connection between them and professes his love to Chelsea. However, Chelsea thinks Adam’s just overwhelmed and confused by blurred lines. Adam insists he loves Chelsea and wants to know if she loves him, too.

Chelsea makes it clear that she loves Nick, but Adam doesn’t buy it. He feels like Chelsea’s choosing Nick because he’s safe, but Chelsea sticks to her guns. She doesn’t think the three of them should attend Nick’s holiday party after all. Adam mentions Christmas morning and wonders where Chelsea will be when Connor wakes up.

Back with Victoria, she reflects on the past and suggests she loves Billy even more now than she did then. Victoria feels like they know each other better than ever, but Billy doesn’t agree in his thoughts. At home, Billy looks at a text and claims he needs to stay in town longer for work. He wants Victoria and the kids to go on to Telluride and promises he’ll be there tomorrow morning. Billy wonders to himself if he can really be the man Victoria needs him to be.

At Jabot, Theo Vanderway’s (Tyler Johnson) working late and admits why to Summer. He notes that he was invited to the Abbott family celebration, but it didn’t feel right since he’s not really family. Later, Summer suggests maybe Lola Abbott (Sasha Calle) is the real reason. She doesn’t think Theo wants to see Lola with Kyle Abbott (Michael Mealor) when he’s pining after her.

Theo advises Summer to skip the pot-stirring and spins things around on her. He contends that Summer wishes he had something going on with Lola. That way Summer could get Kyle back. Summer decides to let this go for now, but she suggests the truth will come out sooner or later.

The Young and the Restless spoilers say some fantastic scenes are coming up. We’ll give you updates as other Y&R news and rumors emerge. Stay tuned to see what else is brewing in Genoa City.