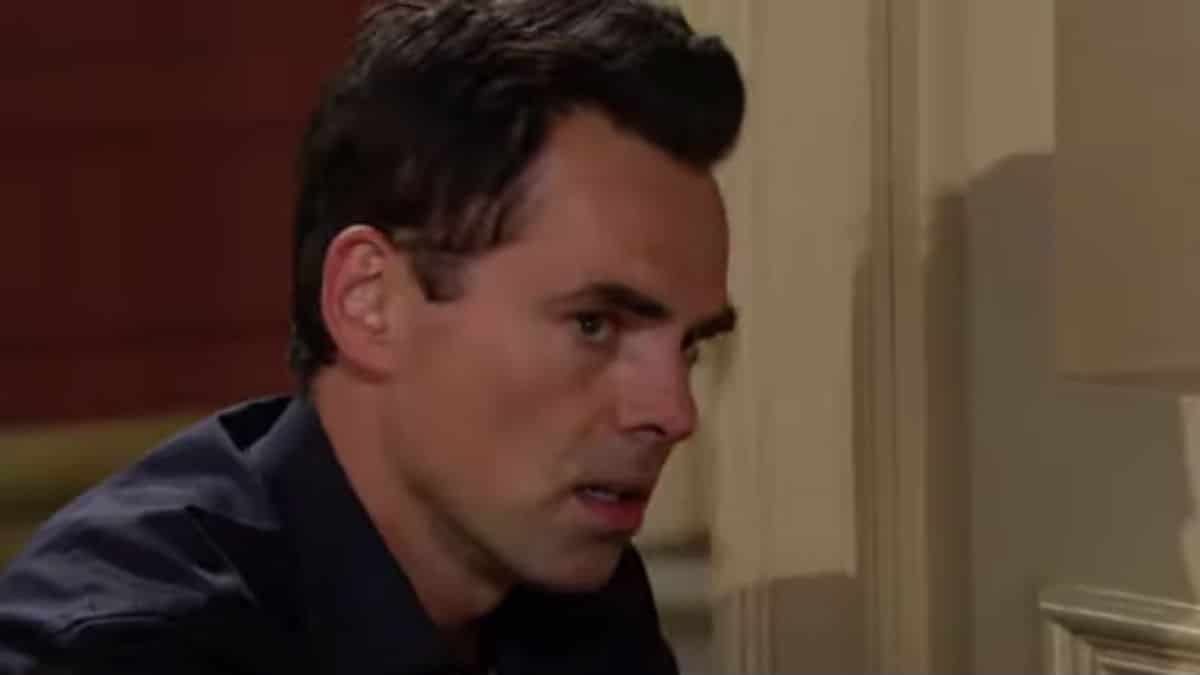 The Young and the Restless spoilers for Thursday, August 29, tease that Adam Newman (Mark Grossman) will appear at the door of the Chancellor mansion and accuse Kevin Fisher (Greg Rikaart) of trying to mess with him. He’ll show Kevin the text message from an unknown person, and Kevin will deny sending it. Kevin will say that he would never jeopardize his family to play mind games with him and neither would Chloe Mitchell (Elizabeth Hendrickson).

After Adam leaves, Kevin will verify with Chloe that she didn’t send the text, and she’ll think that Billy Abbott (Jason Thompson) sent it. Chloe will worry that Billy will do something to hurt Adam, and she’ll want to stop him. They’ll go back and forth about what to do, and Chloe will ask Kevin to go and make sure that Billy is safe.

Next on Y&R, Kyle Abbott (Michael Mealor) and Lola Abbott (Sasha Calle) will have a serious of mishaps with appliances breaking and the power going out. Later, Celeste Rosales (Eva LaRue) and Rey Rosales (Jordi Vilasuso) will arrive for a bon voyage dinner for Celeste, and the four of the will get along well. Kyle will be happy about being part of a family so full of life, and he’ll quip that he’s glad their kids will grow up surrounded by this.

That will pique Celeste’s interest, but Kyle and Lola will stress that they have no plans to have kids yet. Talk will turn to Rey and things with Sharon Newman (Sharon Case), and Lola will think that perhaps Rey should give Sharon a second chance. They’ll all share a toast, and ultimately Celeste will leave on great terms with Lola.

Next on Y&R, Billy and Victoria Newman (Amelia Heinle) will chat at Crimson Lights. Billy will say that he needs to go out of town for work, and he’ll snap uncharacteristically at her when she complains. He’ll say that he has to go, or he’ll lose his job, and besides if things go like he’s hoping then it will change everything. He’ll have a feeling that Adam won’t be waging war on anyone while he’s away.

Next on Y&R, Adam will find Mariah Copeland (Camryn Grimes) at Society and inquire about whether she sent him a text, which Mariah will grouchily deny. Sharon will then arrive and talk with Mariah about her current situation with Adam and Adam’s marriage proposal. She’ll fill in Mariah on her hookup with Adam, and eventually the topic of Rey will arise. Sharon will wish that she could do things over with Rey if she had the chance.

Meanwhile, outside in the dark, a gum-chewing Billy will put on gloves, get into his car, and take a photo of Adam’s mother’s handkerchief.

Back at Crimson Lights, Victoria will call Jack Abbott (Peter Bergman) and find out that Billy didn’t really have a business trip. Adam will then materialize and ask what’s going on with Billy, but Victoria will say that he’s fine. Adam will say that Billy accused him of putting Delia Abbott’s (Sophie Pollono) doll in their house, and Victoria will fire back that she wouldn’t put it past him. She’ll warn Adam to leave them alone, and after Adam’s gone, she’ll leave Billy voicemail message saying that whatever he’s thinking about doing, don’t.

Back at his penthouse, Adam will get a text saying “see you soon” along with a picture of his mother’s handkerchief. Adam will leave.

Finally, on Thursday’s new episode of Y&R, on the highway where Billy wanted Adam to meet, Adam will call out, “You wanted me, you got me, now show your face!” In his car, Billy will try to run Adam down, when Chloe appears and pushes Adam out of the way. Tires will squeal as Billy swerves to try to avoid hitting Chloe.