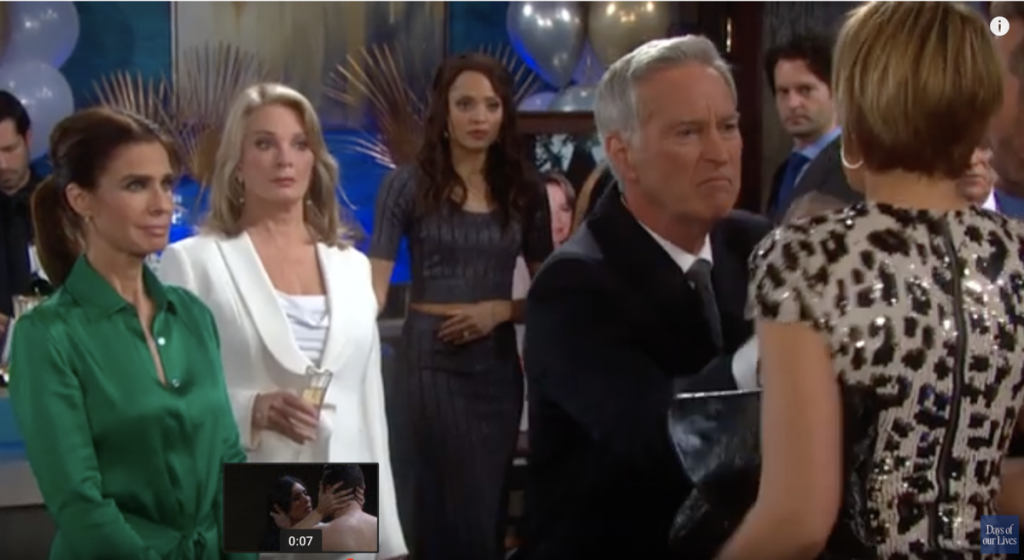 Days of Our Lives spoilers tease that Kristen DiMera (Stacy Haiduk) will finally be exposed, and at John Black (Drake Hogestyn) and Dr. Marlena Evans’ (Deidre Hall) anniversary celebration at that!

DOOL Spoilers – The Walls Are Closing In!

The walls close in on Kristen as more and more people start to suspect that “Nicole Walker DiMera” (Adrienne Zucker) is really Kristen! Gabi Hernandez DiMera (Camila Banus) will be one of the first after they get in a catfight and she figures it out. Stefan DiMera (Brandon Barash) intervenes and is shocked to see Kristen alive, so Gabi must have torn the mask off!

Kristen knocks both Stefan and Gabi out and drags them into the secret room at the mansion, where Ted Laurent (Gilles Marini) and Kate DiMera (Lauren Koslow) were held. They are not likely to have a whole lot of that special champagne left, but Days of Our Lives spoilers say they won’t be held captive there nearly as long as Ted and Kate were! 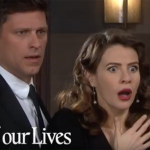 Days Of Our Lives Spoilers – After Imprisoning Stefan DiMera And Gabi Hernandez, Kristen  DiMera Turns Back Into Nicole Walker

After knocking Stefan and Gabi out and making sure they are securely locked up, Kristen gets back into her Nicole mask, wig and persona so she can meet up with Brady Black (Eric Martsolf) who will wind up being her date for John and Marlena’s shindig after Tony DiMera (Thaao Penghlis) tells her he wants a divorce so he stop Anna DiMera (Leann Hunley ) from marrying Roman Brady (Josh Taylor)!

She tells him, no, telling him that has to wait until after she’s gained control of DiMera, and he gets mad, but she basically tells him he can get glad in the same pants he got mad in and he tells her not to ruin John and Marlena’s anniversary celebration. She assures him she will be on her best behavior since she will be with Brady.

DOOL Spoilers – Brady Black Has Some Interesting Questions For “Nicole”

Prior to their conversation is interrupted by Tony wanting a divorce, Brady asks some probing questions that make Kristen very nervous. He tells her, still thinking she’s Nicole, that he thinks that Kristen is alive and wants to know if she remembers seeing her during or after the fire, and she considers revealing her true identity to him since she thinks his questions mean he’s pining for her, Kristen, not Nicole. But she still has that underlying fear of his rejecting her because of her masquerading as Nicole!

John especially grows increasingly suspicious at the party, as various guests talk about Nicole’s strange behavior and strange encounters they have had with her since she has been back in Salem. Susan Banks – the real Susan Banks (Stacy Haiduk) also surprises John and Marlena by showing up, and there’s a good possibility she may bring Kristen’s name up too since by now she may have heard from Sister Mary Moira and found out she didn’t leave the convent or have a boyfriend, which was her story.

The last time Susan was in town and saw Kristen dressed as – Susan! Promo stills show Sonny Kiriakis (Freddie Smith) in attendance and Will Horton (Chandler Massey) is probably with him, so there may be more strange stories John hears from them when they see Susan is in attendance! Kristen, as Nicole, drags her into a back room and locks her up, afraid Susan will expose her if she hasn’t already, and then comes back to the party as if nothing happened!

Eli Grant Gets A Call During The Party

New Police Commissioner Eli Grant (Lamon Archey) gets a call during the party with information that Kristen is indeed alive, and when Hope Brady (Kristian Alfonso) finds out, she relays the intel to John immediately! The two of them put it together and realize that Kristen has been masquerading as Nicole, and as Nicole is trying to get Brady to leave with her and go home, John stops her! A big showdown ensues between the two and John grabs her by the hair and the wig and mask come off right in front of Brady, Sonny, Roman Brady (Josh Taylor), and Kate, who already suspected as well, and other guests!