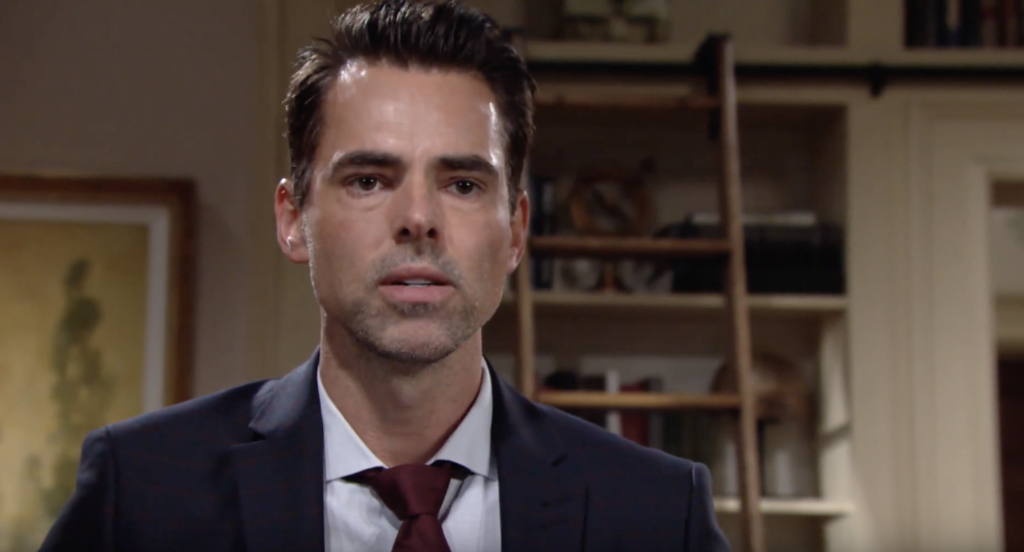 The Young and the Restless spoilers for Monday, September 2, tease that Nick Newman (Joshua Morrow) will try to break the news about Chloe Mitchell (Elizabeth Hendrickson) being alive to Chelsea Lawson (Melissa Claire Egan), but he’ll soon learn that she already knows. They’ll discuss past events involving Chloe, and Nick will wonder if Chelsea wants her friendship back with Chloe.

Meanwhile, Chloe and Kevin Fisher (Greg Rikaart) will talk at Society. They’ll decide to send a text from Billy Abbott’s (Jason Thompson) phone to his family saying that he’s in rehab. Victoria Newman (Amelia Heinle) will show up and ask Chloe a bunch of questions about her return from the dead. Chloe will reveal that Billy knew she was alive, and that Adam Newman (Mark Grossman) was blackmailing her and Kevin. Victoria will express concern for Billy, and she’ll say that she’ll let them know when he’s coming home.

After Victoria leaves, Chloe and Kevin will feel bad for lying about Billy’s whereabouts and what’s happened, but Chloe will think it will make up for it if she can get Billy’s head straight.

Next on Y&R, at Adam’s penthouse, Adam will be peeved with Michael Baldwin (Christian LeBlanc) for Chloe’s situation, and Michael will tell him that their working relationship is now over. But Adam will ask about how Fenmore “Fen” Baldwin (Zach Tinker) is doing, and he’ll show Michael a photo of Fen partying and dealing drugs. Michael will be horrified, and Adam will say that Fen could get eight years in prison for dealing drugs.

Next on Y&R, Victoria will tell Nick that Billy is in rehab. She’ll be concerned that he went to Las Vegas to dig up dirt on Adam and started gambling again. Frustrated, Victoria just won’t understand what’s going on. She’ll tell Nick that Billy knew about Chloe being alive, but he never said anything to her about it. She’ll say that she feels disconnected from him and will worry that rehab is some cover story.

The Young And The Restless News: Jason Thompson Opens Up About Billy’s Emotional Breakdown https://t.co/wOTtY0zQl4 pic.twitter.com/JoxLvXPPYE

Meanwhile, at the Abbott estate, Traci Abbott (Beth Maitland) and Jack will talk about Billy’s return to rehab, and then about Dina Mergeron (Marla Adams). Jack will say that he can’t figure out why his mother was so unhappy with her life. Traci will surmise that she had everything that a woman of that era could want, but for someone with Dina’s intellect and drive, it just wasn’t enough. Jack will think that Dina’s life was out there somewhere, and she had to go find it.

Next on Y&R, Kevin, Chloe, Bella Mitchell (Martie Marie Blair), and Esther Valentine (Kate Linder) will have a picnic in Chancellor Park. Chelsea will see them, and Chloe will spot her and go ask her if she wants to talk. Chelsea will observe that Bella is beautiful. She’ll say that she understands why Chloe wanted Adam dead. They’ll chat a bit and ultimately hug before Chelsea joins in the picnic.

Finally, on Monday’s new episode of Y&R, Billy will awaken in the boathouse. He’ll look at his splint and wonder where he is.