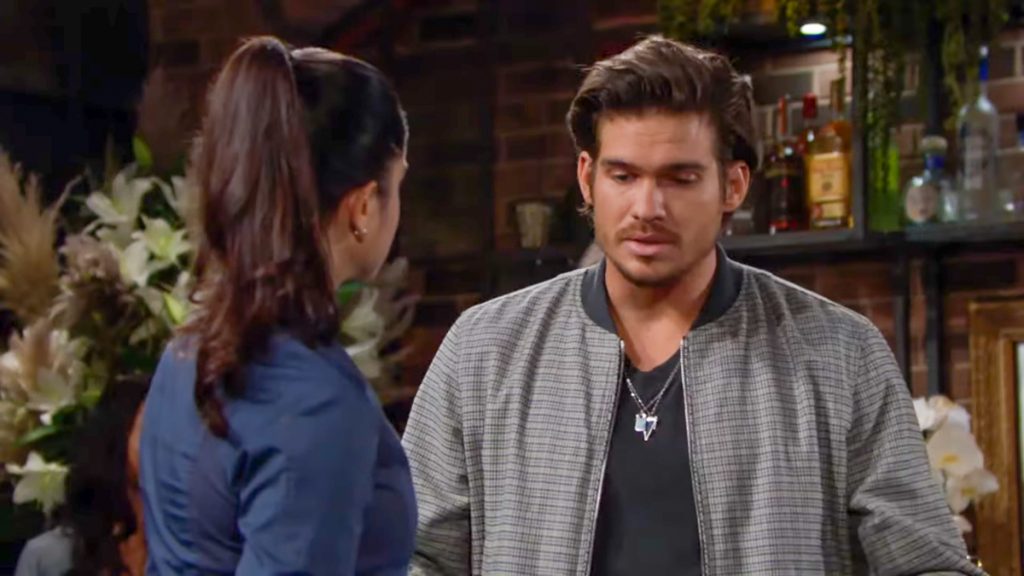 The Young and the Restless (Y&R) spoilers for Monday, October 28, tease that Theo Vanderway (Tyler Johnson) will deal with another career setback. At Society, Theo hangs up the phone and rants to Summer Newman (Hunter King) about the clients he’s losing. Summer does her best to lift Theo’s spirits, so he appreciates that.

At the Abbott mansion, an old friend of Dina Mergeron’s (Marla Adams) arrives. Doris Tillington (Mary-Margaret Lewis) knew Dina in high school, but she doesn’t know if she can be of much help. Jack Abbott (Peter Bergman) and Traci Abbott (Beth Maitland) fill Doris in on Dina’s letter to Stuart Brooks. Although Doris is cagey at first, she eventually decides to reveal Dina’s long-held secret.

Doris talks about Dina having a crush on Stuart when they worked on a Hamlet presentation. On prom night, they managed to sneak away from the after party. Dina later confided in Doris that they made love, but it was just a one-time thing. Since Dina changed her plans and left for Europe soon after, Traci deduces her mother was likely pregnant.

Once Doris heads out, Jack finds a box he recalled seeing earlier. It contains a Hamlet book, which an envelope falls out of. Traci and Jack find adoption papers that prove Dina gave birth to a baby boy: Eric Vanderway. They realize they have a half-brother and want to track him down.

After Mariah joins Kyle at Society, they ultimately meet up with Theo and Summer. Theo wonders when Lola Abbott (Sasha Calle) will return and makes sure she’s OK after her recent illness. Mariah’s curious if they’re friends again, but Kyle’s not ready to make that declaration. Theo, however, feels they’re on the right track. He pays for the last round of drinks and signs his name, so Y&R plays up the Eric Vanderway and Theo Vanderway connection.

At the Grand Phoenix, Chelsea Newman (Melissa Claire Egan) joins Adam after getting his breakfast invitation. She’s a bit wary since he’s being so considerate, but Adam believes they both have to support Connor. Chelsea admits this has been hard, but she’s thankful for the chat.

Soon after, Billy Abbott (Jason Thompson) appears. Adam decides they should put all their cards on the table, so he brings up Billy trying to run him down. He wants to know who prevented his murder and perhaps protected Billy, but Billy doesn’t divulge that information. Talk turns to how they’ll proceed from here. Billy wants to put all the payback to rest, so Adam agrees that they’ll stay out of each other’s way.

At home with Nick, Chelsea gets comfort over the Connor situation and brings up Tammy’s call. She knows about Tammy pushing Nick to run for city council. Chelsea thinks Nick wants to go for it, but he’s hesitant. He eventually admits that his work at New Hope has been great and he’d like to have Chelsea backing him up. Chelsea urges Nick to run, but there are concerns about the scrutiny this will bring.

When people start digging for dirt, it can be dangerous in a town like Genoa City! The Young and the Restless spoilers say some hot drama’s in the works. We’ll keep you posted as other Y&R news and rumors come in. Stay tuned to see what’s ahead on the CBS soap.