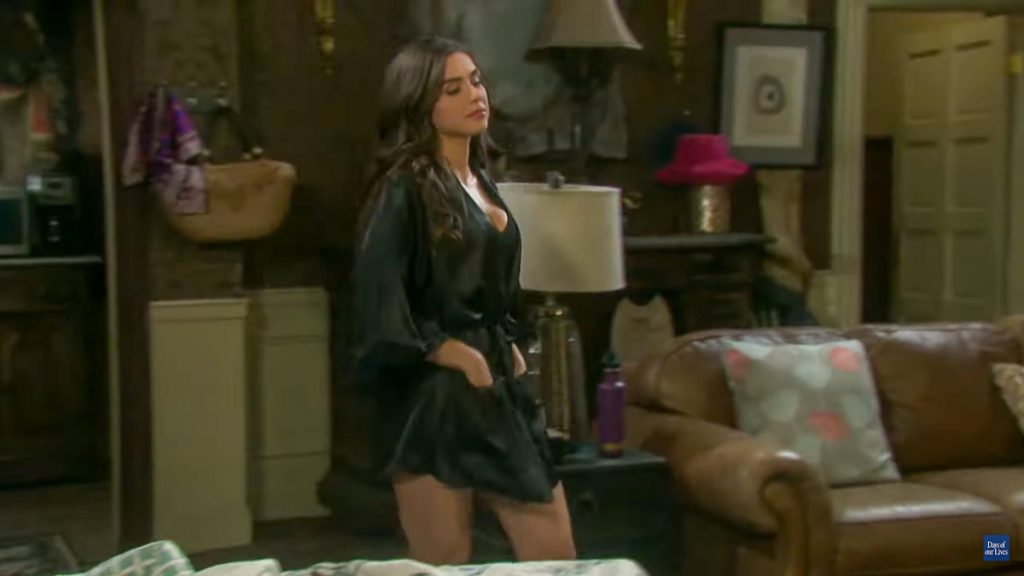 Ciara Brady (Victoria Konefal) finds incriminating evidence in Ben Weston’s (Robert Scott Wilson) coat pocket, after Rafe Hernandez (Galen Gering) collapses and is rushed to Salem University Hospital, where blood tests confirm he has ingested poison. Ciara finds a small brown bottle, and is confused and concerned as to why it would be in Ben’s pocket. Later, after they find out that Rafe was poisoned, Ben takes the bottle to the hospital for testing.

Gabi Hernandez DiMera (Camila Banus) proves to Lani Price (Sal Stowers) that she’ll make good on her threat when she reveals that the pacemaker that has been implanted in Julie Williams’ (Susan Seaforth Hayes) new heart, which came from Gabi’s husband, Stefan DiMera (Brandon Barash) has been booby trapped! Gabi can turn it on or off with a touch to her cell phone, having procured the technology from Visionary Bionics, the company that made Steve Johnson’s (Stephen Nichols) bionic eye. If Lani doesn’t dump Eli Grant (Lamon Archey) at the altar at their wedding, Julie dies!

Haley Chen (Thia Megia) informs John Black (Drake Hogestyn) and Marlena Evans (Deidre Hall) about her strange encounter with Hope Brady (Kristian Alfonso) in the Horton Town Square. Viewers will recall from a recent episode that Haley saw Hope smoking, and Hope didn’t recognize her. Haley remarked that she didn’t know that Hope smoked, and she will likely tell John and Marlena that she is concerned that Hope didn’t recognize her, and possibly about the smoking too.

Jordan Ridgeway (Chrishell Hartley) realizes her plan to poison Ciara Brady has claimed an unintended victim, seeing Rafe passed out cold on the floor and being rushed to Salem University Hospital. The cupcakes must have gotten mixed up somehow and Rafe ate the poisoned one meant for Ciara! The question is, did she put the poison bottle in Ben’s coat pocket before or after she realized Rafe ate the poisoned cupcake? Ben would have no motive to kill Ciara, but she might be able to make the last minute frame stick since Rafe ate the cupcake! She will have to come up with a new plan for Ciara, however.

Hope, now fully programmed as Princess Gina, tells Dr. Wilhelm Rolf (William Utay) that she’s anxious to be reunited with her former love, John Black! However, unless Rolf cooks up a plan – and maybe a serum – to turn John back into “The Pawn” that may be easier said than done; besides, Marlena is still in the way! Will John and Marlena figure things out before Princess Gina tries to make herself a little too available to John?

Julie finally gets a chance to thank Gabi for donating Stefan’s heart, but little does she know that Gabi is using the situation to manipulate Lani. She doesn’t know her new pacemaker is booby trapped either, so she had better make sure she stays sugar sweet to Gabi so that she doesn’t endanger her new lease on life! Gabi could manipulate her pacemaker too, after all!