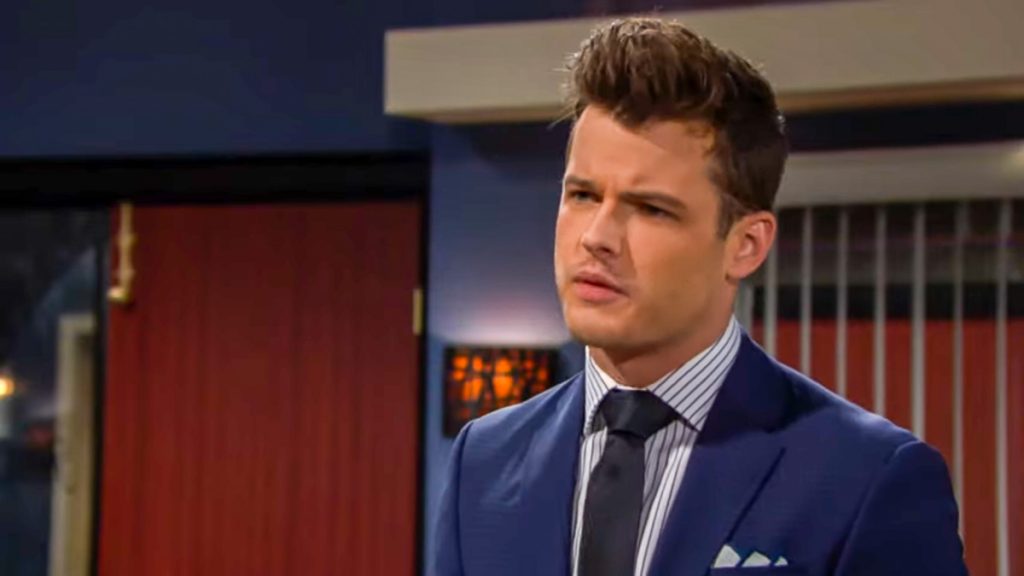 The Young and the Restless spoilers for Monday, October 21, tease that Nate Hastings (Sean Dominic) and Abby Newman (Melissa Ordway) will chat at Society about their breakup. Nate will think that they were quick to walk away, but as they talk, it will become clear that their differences are irreconcilable. Nate will think that Abby was too quick to dismiss the pain that all the lies surrounding Victor Newman’s (Eric Braeden) death ruse caused. He’ll note that he had to lie to his good friends and put his career on the line.

Abby will understand his point of view, but she’ll say that she’ll always be loyal to her family. She won’t want to always feel like her morals are being tested, but he won’t want to throw away his conscience to be with her. That will be about all that will need to be said, and Nate will exit.

Next on Y&R, Devon Hamilton (Bryton James) and Jill Abbott (Jess Walton) will chat and Jill will reveal that Cane Ashby (Daniel Goddard) is coming home with the original pages of Katherine Chancellor’s (Jeanne Cooper) will. They’ll think that it’s suspicious that Tucker McCall (Stephen Nichols) is unreachable, and Devon will say that whoever is behind this whole thing is using Tucker’s absence to further his or her plot.

Devon will then see Amanda Sinclair (Mishael Morgan) and they’ll do their usual bickering before making a comment about Devon being upset over her appearance and leaving. Jill will then tell Devon that it’s time that he considers the possibility that the version of the will that Cane has is real.

Next on Y&R, Rey Rosales (Jordi Vilasuso) will see Adrian Rosales (Joe Montalvo) talking with a blonde woman at the bar at The Grand Phoenix. Adrian will then approach Rey, who won’t be happy that he’s sticking around Genoa City. Adrian will tell him that Kyle Abbott (Michael Mealor) came through for him in his time of need. Theo Vanderway (Tyler Johnson) will be nearby listening.

Rey will then call Lola Abbott (Sasha Calle) and inform her that Adrian is at The Grand Phoenix and that Kyle had given him money. She’ll then turn to Kyle, and an argument will ensue about Kyle’s actions. Ultimately, Kyle will try to reassure Lola that Adrian won’t be staying in Genoa City.

Back at The Grand Phoenix, Rey will blast Adrian for taking money from Kyle and they’ll argue. Theo will still be listening, and after Rey leaves, he’ll approach Adrian. He’ll tell Adrian that he’s an old friend of Kyle’s. They’ll end up discussing Adrian’s relationship with his kids, and Theo will mention Kyle’s rough years with his dad.

Across the room, Nate will bump into Cane, who’s just arrived back in town. Cane will then meet with Amanda, and he’ll hand over the pages of Katherine’s will to her. She’ll be dismayed to learn that he didn’t see or talk to Chance Chancellor (John Driscoll). Cane will want to get the will authenticated, but Amanda will think that it’s too late and she’ll have a bad feeling that she’s been used. She’ll advise Cane to let the whole thing go.

Next on Y&R, at Jabot, Summer Newman (Hunter King) and Kyle will discuss the ongoing situation with Billy Abbott (Jason Thompson). Summer will offer her support and tell Kyle not to let Billy get to him. They’ll then talk about Kyle and Lola’s house search. Summer will be dismayed to hear that they’re looking in good school districts because they’d like a family. She’ll help him to pick out some houses, and he’ll thank her, but the whole thing will clearly upset her.

Back at Society, Abby will tell Lola that it’s really over with Nate. Later, Theo will make his way into the kitchen to tell Lola that he wants to fix things with Kyle. Lola will remark that showing up in the kitchen isn’t the way to go about it. They’ll walk into the main area of the restaurant and Summer will appear. Theo and Summer will then discuss Kyle and the house hunting.

Kyle will then show up at The Grand Phoenix to find Adrian there. Kyle will let Adrian know that his presence is not good for Lola. Adrian will say that he’s trying to heal the wounds between them.

Finally, on Monday’s new episode of Y&R, Lola and Kyle will look at houses together at their apartment, and Kyle will point out one that Summer liked earlier. Lola will say that it’s not “her.”