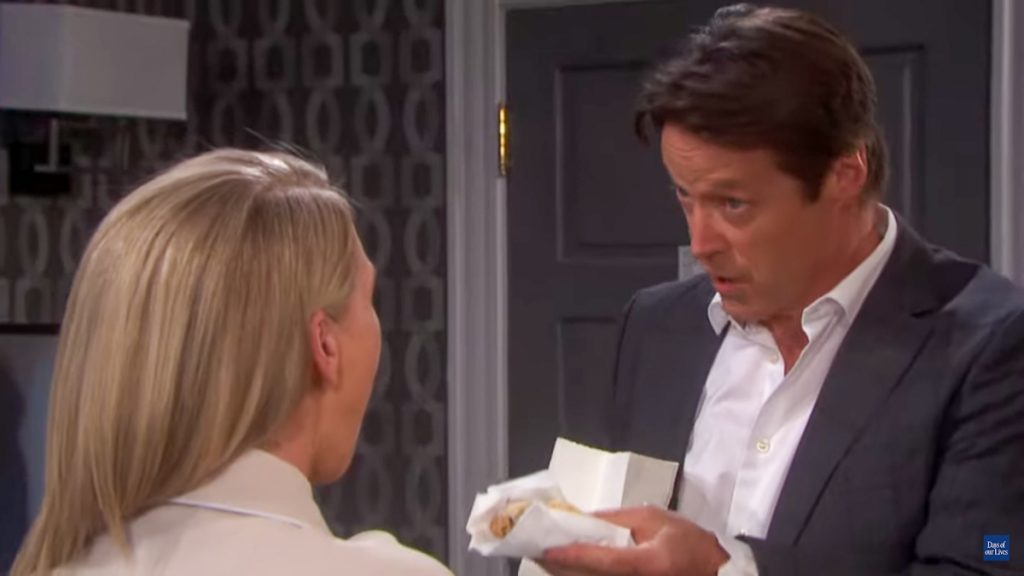 Brady Black, (Eric Martsolf) who has moved Kristen DiMera (Stacy Haiduk) in with him at the Kiriakis mansion because of her high-risk pregnancy with his baby, supports her during some sort of medical crisis. Might there be a problem with the baby?

Brady will certainly not want Kristen to lose that baby, so he will do whatever he has to in order to help Kristen through this medical crisis, including taking her to the Salem University Hospital emergency room himself if he has to! He may be able to convince Kristen that 911 and an ambulance with trained paramedics may be a better option if this is, indeed, a pregnancy related crisis!

Eve Donovan Deveraux (Kassie DePaiva) will refuse to sign Jack Deveraux’s (Matthew Ashford) divorce papers – at least at first. Later in the week Jack proposes to Jennifer Horton (Melissa Reeves) so Eve might just give him a hard time at first.

It would be like Eve to try and prevent Jack from moving on with Jennifer by not signing the papers, but perhaps then she realizes she’s fighting a losing battle and finally gives in and signs them! Days of Our Lives viewers and Jack may see some battles with Eve on the way to finally getting his divorce from her so he can remarry Jennifer!

Viewers will recall from Thursday, October 17th’s episode that Jennifer Horton (Melissa Reeves) had convinced Dr. Kayla Johnson (Mary Beth Evans) to let her take a flash drive of Dr. Wilhelm Rolf’s (William Utay) to him that Kayla had found in the lab space she was clearing out.

In Monday’s episode, Jennifer will try and access the drive wanting to see exactly what Rolf has on it; but will she be able to interpret it? It may be a new formula diary that cannot be burned, or does it contain Rolf’s blueprint for turning Jennifer’s cousin Hope Brady (Kristian Alfonso) back into Princess Gina Van Anhalt?

Xander Kiriakis (Paul Telfer) will ask Sarah Horton (Linsey Godfrey) a favor in return for keeping her pregnancy a secret, or at least that the baby is Eric Brady’s (Greg Vaughan). As viewers will recall, Nicole Walker (Arianne Zucker) already knows the secret, and Xander hopes she will not let it slip! Xander may be trying to get Sarah to stay in Salem and not move away in return for continuing to keep her secret, which would be playing hardball, but it may be the only thing he can think of to prevent her from moving away!