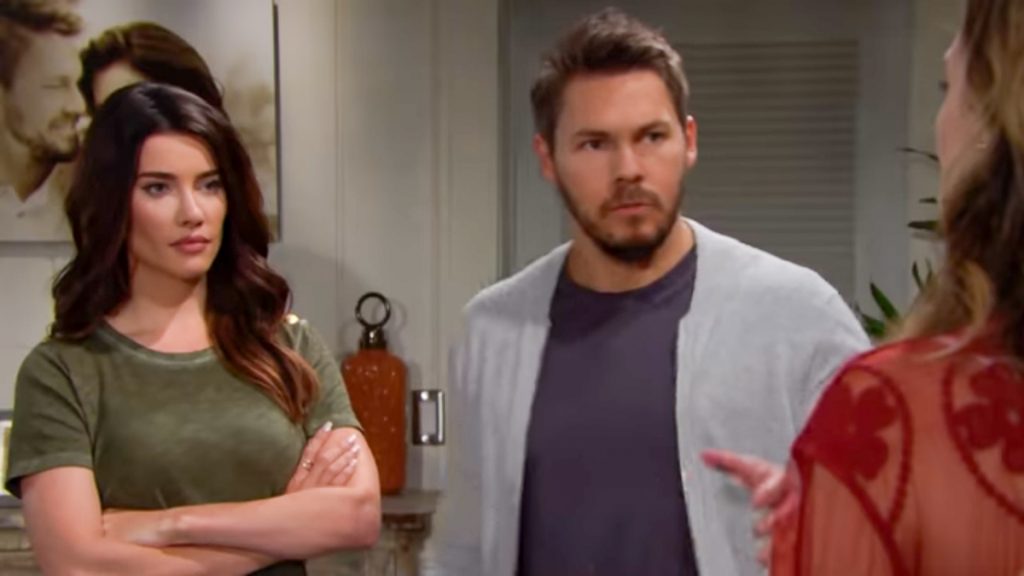 The Bold and the Beautiful spoilers for Monday, October 21, tease that Liam Spencer (Scott Clifton) will really be put on the spot. As B&B viewers know, he’s just interrupted an argument between Hope Logan (Annika Noelle) and Steffy Forrester (Jacqueline MacInnes Wood).

Hope thinks that Steffy isn’t respecting her relationship with Liam, and she’s just asked Liam to set the record straight. Specifically, she wants Liam to tell Steffy that his future with her and Beth Spencer (River Davidson and Madeline Valdez), not with Steffy.

Bold & The Beautiful Spoilers – Hope Logan Gets An Unpleasant Surprise

But it looks like Hope might get a surprise when Liam responds. The Bold and the Beautiful spoilers say that Steffy will get the upper hand in the argument, stunning Hope. So perhaps Liam won’t give Hope the answer she wants to hear.

But since ongoing B&B spoilers indicate that Hope and Liam will be staying together and trying to create a permanent home for Douglas Forrester (Henry Joseph Samiri), it doesn’t look like Liam’s going to say anything extreme here – it will probably just be more equivocal than Hope would like it to be.

For example, Liam may try to play both sides, saying that while he loves Hope and plans to make a life with her, that he will always be there as an active person in Steffy and Kelly Spencer’s (Chloe Teperman and Zoe Pennington) life. He may even indicate that he loves Steffy on some level, and he might just make it clear that there will be no harsh lines drawn in this extended/blended family.

Next, on Monday’s new episode of B&B, Zoe Buckingham (Kiara Barnes) will hear something very interesting from Thomas Forrester (Matthew Atkinson). As B&B viewers know, she’s currently hanging out with Thomas at his friend Vinny Walker’s (Joe LoCicero) apartment, and she’s been hearing all about his goal of ridding Forrester Creations of the Logan women. He’s declared that he wants to take back his family company and eventually be the top dog there.

According to B&B spoilers, Thomas will also tell Zoe that she’s become an important person to him. It will probably shock her, but he’ll confess that she’s the inspiration for many of his designs. As B&B viewers know, Thomas has been busy designing in his downtime, and while his muse used to be Hope, that’s pretty much gone out the window. He’ll tell Zoe that he now designs with her in mind.

Could we be looking at a situation where Thomas might ask Zoe to return to Forrester Creations one day? He might promise her that if she helps him by being his muse and an ally as he tries to get back into Forrester Creations, then he’ll get her back in as a model to the fashion house. She might then have some incentive to help him get rid of the Logans and carry out his takeover plan.