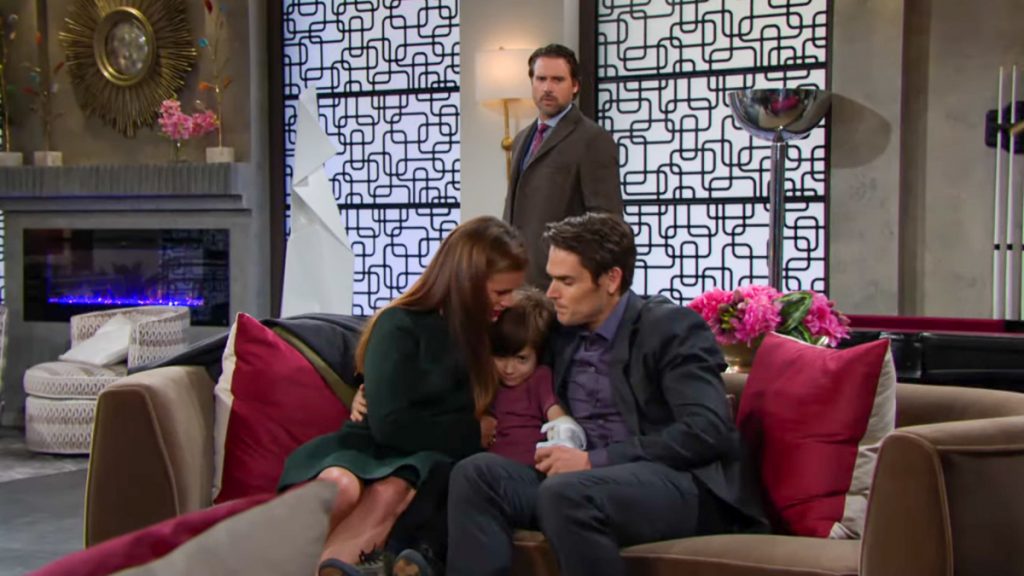 The Young and The Restless spoilers tease that Chelsea Lawson (Melissa Claire Egan) will make a move for the sake of her traumatized son, Connor Newman (Judah Mackey) that Nick Newman (Joshua Morrow) will give his blessing to for the time being, but his patience may run thin. Chelsea packs her bags and moves in with Adam Newman (Mark Grossman)!

Chelsea gets a call from Adam about Connor; Connor is having really bad stomachaches, and she recognizes this as a symptom of post-traumatic stress disorder in children, and she knows that Connor needs his mommy! Connor has been saying that he feels safer and better with Mommy and Daddy both there with him together, and as Y & R viewers know, Connor just came through a very scary situation with the hostage crisis at the Grand Phoenix!

Chelsea assures Nick that the move in with Adam should be temporary, but necessary, for the good of Connor. Nick will be understanding up to a point but chances are, the longer this move-in with her ex-husband and his half-brother and rival goes on, the less patient Nick might be!

Adam took Connor to talk to a crisis counselor specializing in traumatized children right away, but it didn’t work and Connor wouldn’t open up. He didn’t want to go back and tells Adam that he wants Mommy and Daddy together with him. Nick thinks that Connor should come home, and Chelsea actually does too, but with Connor’s continued fearfulness she knows she needs to be with her son.

But what neither Adam nor Chelsea sees is that the little boy has quite a bit of his manipulative father Adam in him, and even though no one is disbelieving his fearfulness, nightmares, and trauma, Connor may be using this situation to try to get his parents to reconcile with one another!

Adam will also call in Sharon Newman (Sharon Case) to help with Connor, since Connor has opened up to her before. Perhaps Sharon will be able to help Connor overcome the trauma, although she is not a specially trained trauma counselor like the previous one Adam took Connor to. The main thing that Nick, Adam, Chelsea, and Sharon all would agree on is that Connor needs to feel safe, and secure. It is true for some people that time heals all wounds, but for others, especially for traumatized children, they can be traumatized for life and any time life brings them a situation that reminds them of the original trauma, they can be triggered and all the fear and panic can return!

Post-traumatic stress disorder is the same whether one is a returning war veteran, a former hostage, or an abused spouse or child. It is serious and it is nothing to fool around with! In a child, sometimes a change of scenery and routine can help temporarily, but to be healed to the point that they can learn to manage their trauma trigger points can take years!