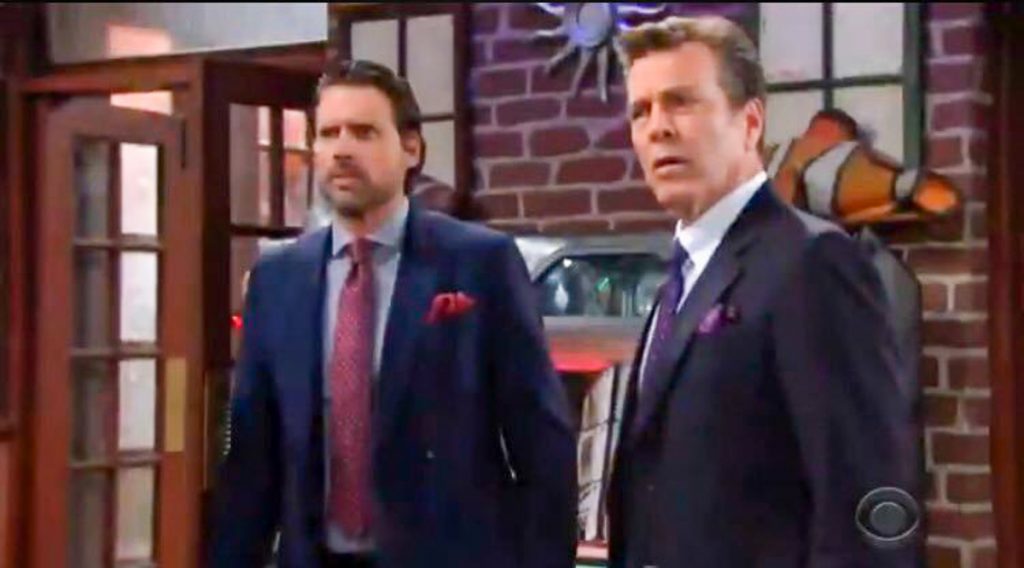 The Young and the Restless (Y&R) spoilers for Monday, November 18, tease that some hot drama’s coming up. We should mention that due to impeachment hearings coverage, some preemptions are throwing off the schedule a bit. It seems the action happening in this episode won’t air until Monday rolls around, but it’ll be worth the wait!

Let’s right down to it. First, Abby Newman (Melissa Ordway) speaks with Rey Rosales (Jordi Vilasuso) at the Grand Phoenix. She frustrated over guests that have canceled and wants to make sure nothing like this ever happens again. Abby also grumbles about Chelsea Lawson’s (Melissa Claire Egan) link to Simon Black (Jeffrey Vincent Parise) and needs info that could push Phyllis Summers (Michelle Stafford) out.

As Kevin Fisher (Greg Rikaart) walks over, Rey urges him to talk to Abby about security. Kevin’s curious about Chelsea, so his interest manages to raise red flags. Abby doesn’t get why Kevin’s so concerned about Chelsea, but he argues that Abby’s just being paranoid.

At Adam Newman’s (Mark Grossman) place, he tries unsuccessfully to get rid of Phyllis. Phillip “Chance” Chancellor IV (Donny Boaz) isn’t keen on Phyllis being there either, but she pours herself a drink and asks about her shady business partner. Phyllis wonders if Chelsea’s a liability, but Chance wouldn’t tell her even if he knew.

Young And The Restless Spoilers: Phyllis Summers Takes Her Questions To Chelsea Newman

Adam instructs Phyllis to take her questions to Chelsea and wants Phyllis to go. Before Phyllis exits, she reflects on the tricks she’s seen and doesn’t think Adam’s changed. Once they’re alone, Chance worries about Phyllis doing what went down in Vegas. Adam won’t think she does, but Chance spells out his concerns. It definitely wouldn’t be a good thing if Phyllis knew exactly what happened.

After Adam promises to deal with Phyllis, Chance warns him not to make Adam’s problem their problem instead. At Newman Enterprises, Billy Abbott (Jason Thompson) catches Victoria Newman (Amelia Heinle) off guard and mentions he’s finished at work. Victoria still has a conference call, but she ultimately opts to have some steamy fun with Billy in the office.

When Billy asks if Victoria was OK with his surprise, she assures him she likes that he’s exciting and unpredictable. Meanwhile, Jack Abbott (Peter Bergman) visits Nikki Newman (Melody Thomas Scott) and Victor Newman (Eric Braeden) at the ranch. Victor mentions that he tried to get in touch with Adam and Nick Newman (Joshua Morrow), but neither one has texted back about Connor Newman (Judah Mackey).

Next, Jack discusses Nick’s campaign with Victor and Nikki. He knows they’re facing quite a battle thanks to the latest chaos, but he isn’t ready to throw in the towel. Victor’s more concerned about Nick himself instead of his political career.

The Young and The Restless #YR Spoilers: Adam Interrogates Chelsea, Want To Know The Truth About Simon @celebratesoaps https://t.co/qxr9oaxOZ0

At Nick’s house, he deals with a reporter over the phone. Nick insists he intends to stay in the race and put out a statement later. Once Nick hangs up, he tells Chelsea that things are only going to get worse. Everyone’s going to want answers about Chelsea and Simon’s link.

Chelsea thinks Nick should let her have it, but he doesn’t want to. After Chelsea offers to make a confession to the media, Nick nixes that idea, too. Chelsea could land behind bars, which wouldn’t do him any favors. She still doesn’t want Nick to give up on his dreams, but he eventually decides dropping out of the race is for the best.

Back at the Grand Phoenix, Phyllis grills “Agent Fisher” about what he was up to with Chloe Mitchell (Elizabeth Hendrickson). She saw him on the security cam and wants information. Phyllis thinks Chance, Chelsea and Simon are all connected somehow, so she pushes Kevin to spill what he knows. Kevin refuses to divulge anything and suggests Phyllis wants to get the hotel back.

Afterward, Phyllis joins Abby and points out that her security system saved the day. Abby suspects Phyllis is up to something and is using the system to her advantage. Phyllis shifts the conversation to Chelsea and all the damage she’s caused.

The Young and the Restless spoilers say Phyllis will continue to make waves in the weeks ahead. We’ll give you updates as other Y&R news and rumors emerge. Stay tuned to see what else is brewing in Genoa City.