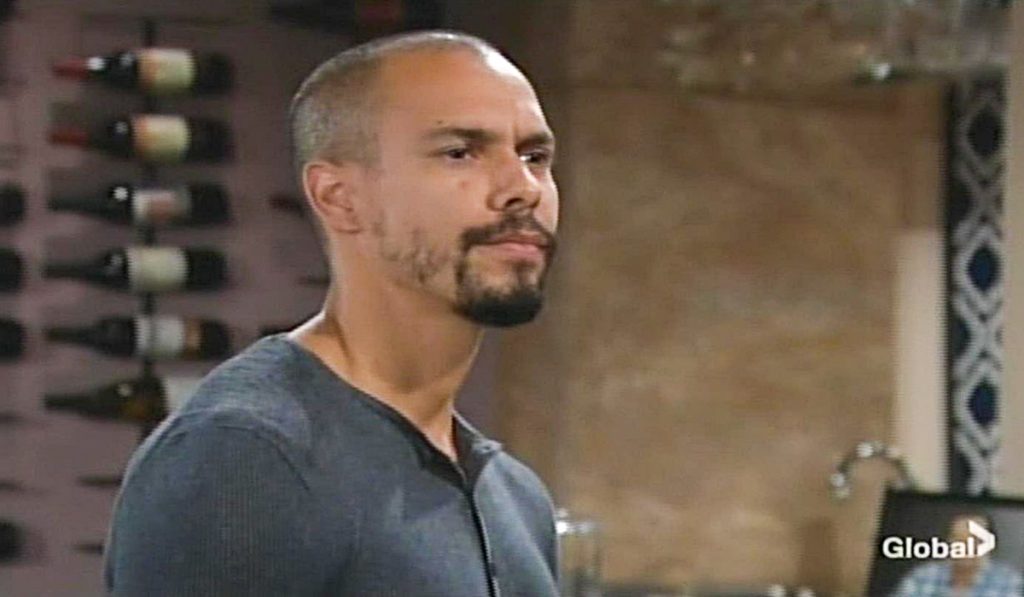 The Young and the Restless (Y&R) spoilers for Monday, November 18, tease that some Genoa City bombshells are brewing. We should point out that Friday’s episode was posted online, so you can check that out at CBS.com if you need to catch up. The impeachment hearing coverage has been messing with this soap’s schedule a bit, but the drama will press on!

On Monday, Devon Hamilton (Bryton James) and Elena Dawson (Brytni Sarpy) get a visit from Phillip “Chance” Chancellor IV (Donny Boaz). Chance assures Devon that he never hired Amanda Sinclair (Mishael Morgan), so Devon hits the roof. He made a life-altering decision based on a lie, so he’s really riled up. Based on Chance’s admission, Devon is sure this is a scam.

Elena heads to Crimson Lights, where she talks to Nate Hastings (Sean Dominic) on the patio. Nate gets updates on Chance’s revelation and is quick to defend Amanda. Elena’s miffed about that and suggests Nate should drop Amanda as his attorney. Nate’s still counting on Amanda to help him, so Elena tells him good luck.

Back with Devon, he summons Cane and gives him a shot at coming clean before he gets hit. Cane insists he’s questioning certain things as well, but he believes the new will pages are legit. He’s upset over Cane acting like he’s a liar.

Young And The Restless Spoilers: Jill Abbott Gets In Touch With Cane Ashby

Jill Abbott (Jess Walton) gets in touch with Cane by phone and lets him know she’s going to find Colin Atkinson (Tristan Rogers). Chance decides he should book a flight to the Maldives and get some answers, too. He plans to head out tomorrow afternoon. As for Devon, he’s eager to get justice. If Colin’s guilty as they suspect, Devon wants him thrown in prison.

At Nick Newman’s (Joshua Morrow) house, Chelsea Lawson (Melissa Claire Egan) talks to Chloe Mitchell (Elizabeth Hendrickson) about her guilt and lingering fears. She worries Simon Black (Jeffrey Vincent Parise) could have dangerous friends and considers the idea that they’re all still targets. Nick overhears part of their chat and reassures Chelsea later. He intends to protect her and thinks it’s time for Connor Newman (Judah Mackey) to come home.

Chelsea isn’t keen on potentially sparking a custody battle. Nick contends that Adam could still try to harm them since he’ll always be Adam. Even so, Chelsea points out that Adam will always be Connor’s father. At Adam’s penthouse, he returns with Connor after the kid’s appointment with a child trauma therapist. Connor wasn’t talkative there and doesn’t want to go back. He does, however, think his parents getting back together would help. Adam suggests they can call Connor’s mom anytime.

Y&R Spoilers: Kyle Abbott Gets Into It Again

Kyle Abbott (Michael Mealor) get into it again. Billy’s made a unilateral decision about a boutique in Milan, so Kyle lashes out. He doesn’t think Ashley Abbott (Eileen Davidson) will approve, but Billy stands his ground and doesn’t think Kyle’s earned his spot yet. Kyle rants about Billy being reckless before he stomps off.

At Crimson Lights, Victoria Newman (Amelia Heinle) speaks to Sharon Newman (Sharon Case) about Chelsea. She thinks it’s Chelsea’s fault that Nick’s campaign ended and feels her return to GC was a mistake. Billy finds Victoria and mentions his latest issues with Kyle before Adam shows up with Connor.

Adam and Connor approach Sharon, who agrees to come play with Connor at the penthouse. Once they’re at Adam’s place, Sharon gets Connor to open up a bit. The kid goes up to his room, which leaves Sharon to give Adam advice. She urges Adam to keep giving Connor plenty of reassurance. Sharon thinks it’d be good for Chelsea to be on hand to offer support, too.

Adam confesses that Connor wants his mom and dad to reunite. Sharon suggests the idea represents stability to Connor, who’s certainly craving that right now. Afterward, Adam calls Chelsea at the Grand Phoenix and sets up some family time.

Back with Victoria, she praises Billy for how he handled seeing Adam at the coffeehouse. Billy fears he might be taking his anger out on Kyle. He wants to talk to his therapist and avoid starting a family war. At Billy’s therapy sessions, he discusses his screwups with the doc and admits his worries about projecting his anger. Billy considers the possibility that he’s sabotaging himself here.

Next, Billy stops by Jabot again and tries to make amends with Kyle. He apologizes and vows to listen to what Kyle has to say. Kyle isn’t sure he buys what Billy’s telling him, but Billy promises to do a better job of handling the family legacy.

At Nick’s place again, he shuts down Victoria’s suggestion. Victoria thinks Nick could create a little distance from Chelsea and continue is campaign, but Nick’s not having it. He feels Chelsea needs him right now. Afterward, Nick phones Michael Baldwin (Christian LeBlanc) to set up a meeting with Simon ASAP.

The Young and the Restless spoilers say some twists and turns are still to come. We’ll keep you posted as other Y&R news and rumors emerge. Stay tuned to see what else is brewing on the CBS soap.