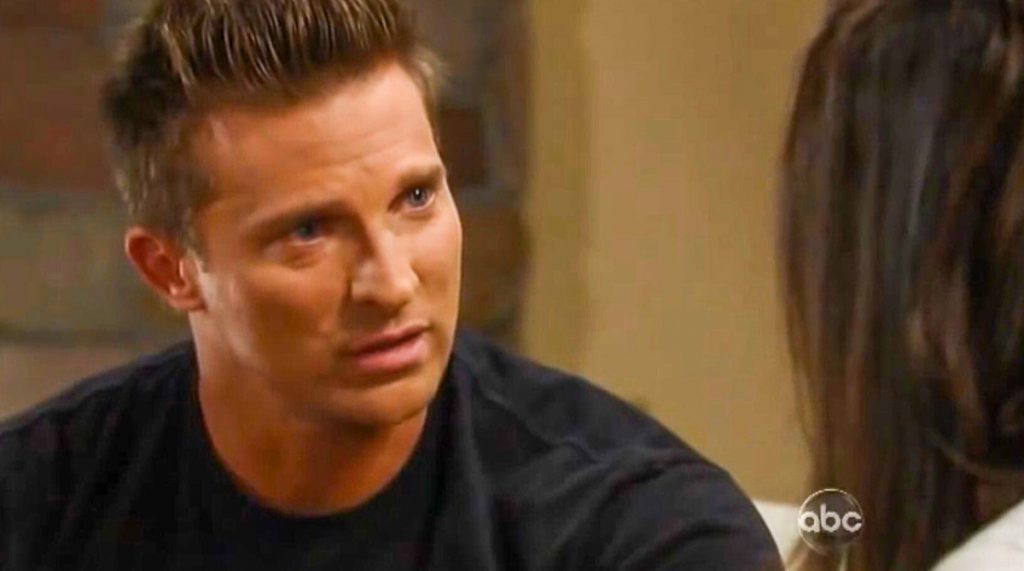 General Hospital spoilers tease that Wednesday, November 20 will be another exciting day of drama for GH viewers! Remember if you are a US viewer the Trump impeachment hearings may or may not interrupt your show; keep an eye out for updates!

Detective Harrison Chase (Josh Swickard) was not pleased to have to find out through the grapevine that he is an uncle! He buttonholes his older brother, Dr. Hamilton Finn (Michael Easton) and asks him rather pointedly if there isn’t a daughter he neglected to tell him about! Viewers will recall that Robert Scorpio (Tristan Rogers) let that important fact slip in a previous episode of General Hospital. Now Chase is a tad insulted that Finn didn’t tell him about Violet Barnes (Jophielle Love) first instead of him having to hunt Finn down for the facts!

Hayden Barnes (Rebecca Budig) and Anna Devane (Finola Hughes) haven’t ever been exactly what one would call best friends to begin with, but now the tables have turned and instead of Anna questioning Hayden, Hayden is questioning Anna!

It sounds like Hayden is trying to find out if Anna is still sticking with Finn now that she has found out that the two of them have a daughter together, and their relationship would be more complicated. She also may be trying to judge if Finn has been telling Anna everything about Hayden and Violet, and she asks Anna, “You’re still getting married, right?” Hayden has yet to divorce Nikolas Cassadine (Marcus Coloma) so she may be jumping the gun just a bit trying to interfere between Finn and Anna!

Valentin Cassadine (James Patrick Stuart) buttonholes Ava Jerome; (Maura West) he rather pointedly accuses her of having Helena Cassadine’s (Constance Towers) portrait. Ava has the portrait, but she has it hidden in a back room of her gallery. Ava also knows that because it’s a J Garren portrait, there are clues to something important painted into it and will be very curious as to what Valentin might be looking for in the clues! Apparently Valentin has just found out that Mikkos Cassadine (John Colicos) had a codicil disinheriting him and the portrait has something to do with where it is!

It would seem that Jasper “Jax” Jacks (Ingo Rademacher) and Nina Reeves (Cynthia Watros) may be at an impasse; Jax rather brusquely informs Nina that he will not be attending her wedding! It sounds like Nina is standing by her man Valentin and they have set another wedding date; Jax, of course, doesn’t like that too well and probably tried to talk her out of staying with Valentin! Nina is seemingly not budging.

At Wyndemere, a feisty Charlotte Cassadine (Scarlett Fernandez) surprises Nikolas by shouting at him, “What are you doing in my living room?!” Nikolas looks somewhat amused at his little niece/cousin and as if he admires her bravado! She saw him on the docks the night she was rescued from Cassandra Pierce (Jessica Tuck) with a gun and told about it to her grandma Laura Collins (Genie Francis) but Laura told her he was probably someone who works on the docks with a gun in case of trouble.

Charlotte obviously has never seen any photographs of Nikolas! Nikolas may not know about Charlotte either, but he must think that either she is Nina’s, or that she reminds him a whole lot of his little sister Lulu Spencer (Emme Rylan) at the same age! Long time viewers will recall that Nikolas was a teenager when Lulu was born!

Jason Morgan (Steve Burton) is extremely upset as he vents to Carly Corinthos (Laura Wright). Sam McCall (Kelly Monaco) has just been sentenced to two years in Pentonville, and he wasn’t able to do anything to prevent it; part of the reason was that she didn’t need to save his life when Shiloh Archer (Coby Ryan McLaughlin) had him down on the deck of the Haunted Star with a gaffing stick! He shouts to Carly and tells her he should have killed Shiloh from the start!

Brook Lynn Ashton (Amanda Setton) has just come home to the Quartermaine mansion from Charlie’s Pub and walked in on her father, Ned Quartermaine (Wally Kurth), stepmother Olivia Quartermaine (Lisa LoCicero) and Sonny Corinthos (Maurice Benard) having a conversation about Dante Falconeri (Dominic Zamprogna) not wanting any more letters from his mom and sending them back to her! Brook Lynn walks over to Sonny and asks him if he’s still driving the ladies wild!