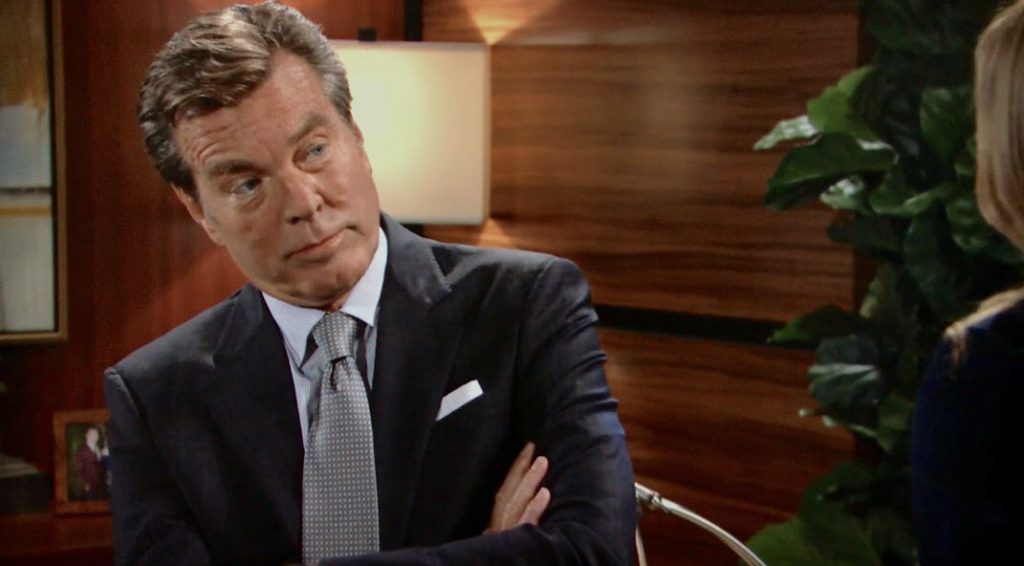 The Young and The Restless spoilers tease that there will be big changes at Jabot! Jack Abbott (Peter Bergman) realized that he needs to take the time to stop and smell the roses, and he’s stepping back!

The Young and The Restless weekly spoiler video shows Jack in a meeting in his office, sitting behind his desk with his younger brother Billy Abbott (Jason Thompson) and his son Kyle Abbott (Michael Mealor) sitting at the front of the desk. Kyle tells his father he is looking forward to being his right hand man, and Jack says that is not going to happen because he is stepping back from the company; question is, who will be head honcho, Billy or Kyle while Jack is taking this time for himself? Kyle ran Jabot while Jack was in Sedona, maybe he will do it or perhaps Billy and Kyle will run it together, since Jack has both of them in the meeting.

Viewers will recall from recent episodes that Jack had decided to write a book about the Abbott family, with the help of his sister, Traci Abbott (Beth Maitland) who is a published author. This is likely to be one of the reasons he’s stepping back from Jabot for a while, and possibly also to be able to spend more time with his mother Dina Abbott Mergeron (Marla Adams) who has Alzheimer’s Disease.

Jack recently spent time with her and had a breakthrough, where she called him “Jackie” and told him she loved him too, in a more lucid moment. Jack was extremely affected by the “death” of Victor Newman (Eric Braeden) in that it made him realize how short life can be and that every moment should count. He will cherish all the lucid moments that his mother occasionally has as her condition inevitably deteriorates!

Jack’s time away in Sedona, and his surprise lucid moment from his mother is definitely teaching him to appreciate life, and that there is more to life than the business world. All work and no play, as the old saying goes, has made Jack a dull boy, and he doesn’t want his tombstone to read “Always working”!

He didn’t find Mrs. Right on his trip, but he did have some good come out of his conversations with Sharon Newman (Sharon Case) who unexpectedly showed up at the same resort, and she got some good out of them too; at least she’s realized Adam Newman (Mark Grossman) isn’t her Mr. Right and never has been, she only wanted to fix him, and people can’t fix people who are unwilling or unable to fix themselves! A whole new Jabot might be waiting for Jack when and if he comes back, with the fresh young blood that is Kyle, and Billy might have some good new ideas too!