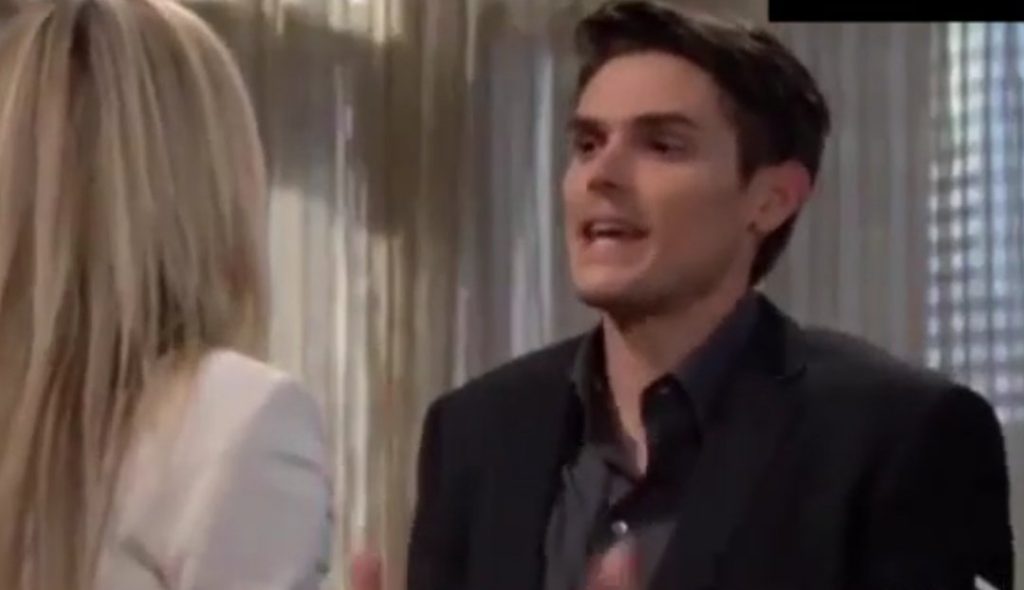 The Young and the Restless spoilers for Friday, September 27, tease that Nick Newman (Joshua Morrow) will appear at Adam Newman’s (Mark Grossman) penthouse to invite him to Victor Newman’s (Eric Braeden) memorial. Nick will say that it’s what Victor would want. The two men will argue, with Nick finally telling Adam that if there’s a shred of decency in him, he’ll do the right thing. After Nick leaves, Adam will break down and collapse to the floor before pulling himself together.

Meanwhile, at Society, Kyle Abbott (Michael Mealor) will visit with Lola Abbott (Sasha Calle) in the kitchen. They’ll discuss Victor’s death a bit and how it’s his him hard and had him thinking about what’s important in life and what really matters. They’ll discuss Summer Newman (Hunter King) and the renewal of Kyle and Summer’s friendship. Kyle will remark about how he wishes Summer wasn’t dating Theo Vanderway (Tyler Johnson), and he’ll notice the cut on Lola’s finger. Lola won’t disclose her conversation with Theo yesterday.

Next on Y&R, at the Newman Ranch, Nikki Newman (Melody Thomas Scott), Victor, and Victoria Newman (Amelia Heinle) will discuss Nick’s visit with Adam, which is the next step in their plan. Summer will arrive, prompting Victor to hide so she doesn’t see him. Nick will then arrive and comfort a still-grieving Summer. After Summer leaves, Victor will apologize for putting everyone through this, and they’ll all agree that Summer needs to stay in the dark so that Phyllis Summers (Michelle Stafford) doesn’t find out about the plan.

Next on Y&R, at The Grand Phoenix, Theo will find out that Phyllis is back with a stake in the hotel before meeting with Mariah Copeland (Camryn Grimes). She’ll confront him about hitting on Tessa Porter (Cait Fairbanks), and he’ll try to minimize by saying that he’s a natural flirt, but Mariah will bring up sexual harassment training, which will prompt Theo to promise that it will never happen again.

Summer will then arrive, and she and Theo will go to a hotel room, and she’ll be stunned to realize that he wants to have sex while she’s grieving Victor. Theo will not like hearing that Summer got comfort from Kyle, especially after he opened up to her about his own father’s death. Summer will apologize, and Theo will hold her.

Young & The Restless Spoilers – Kevin Fisher Asks For His Job Back

Next on Y&R, Michael Baldwin (Christian LeBlanc) will talk with Kevin Fisher (Greg Rikaart). Michael will update him on Adam likely tampering with Victor’s meds and about Adam knowing about Fenmore “Fen” Baldwin’s (Zach Tinker) drug issues and Adam’s knowledge of it all. Kevin will then spot Paul Williams (Doug Davidson) and ask for his old job back, which Paul will agree to.

Paul will then tell Michael that the pharmacist who was involved in altering Victor’s meds was caught trying to leave the country. He said that he warned her that her plea deal didn’t include perjury and that she then told a very different story.

Next on Y&R, Phyllis will arrive at Adam’s penthouse and notice that he’s packed and ready to go somewhere. She’ll say he can’t leave because it’s time for him to take control of Newman Enterprises. They’ll go back and forth, and Adam will reiterate that it wasn’t his plan for Victor to die. Phyllis will ask for Adam’s penthouse while he’s gone, and he’ll toss her the keys.

Later, in Chancellor Park, Adam will talk with Chelsea Lawson (Melissa Claire Egan) and apologize for telling Connor Newman (Judah Mackey) about Victor’s death, and he’ll say he’s leaving Genoa City for good. Chelsea will be angry that he’s deserting Connor, and she’ll ask him to tell Connor himself that he’s leaving.

Next on Y&R, at Nick’s house, Adam will tell Connor that he’s leaving and not coming back. Connor will beg Adam to let him go with him and will wonder if Adam’s mad at him. Adam will tell him that he’s perfect and that he has a messed-up dad who will drag him down. Connor will be upset and ask Chelsea to make him stay, and he’ll throw in that he doesn’t want Nick for a father. Adam will then get a text and look shocked.

Michael will arrive at Adam’s penthouse to find Phyllis there. She’ll be intrigued to see him there, and he’ll ask her what she’s hiding.

Finally, on Friday’s new episode of Y&R, Adam will show up at the ranch and see Victor sitting at his chess board. He’ll say, “Well played, pops, well played.”