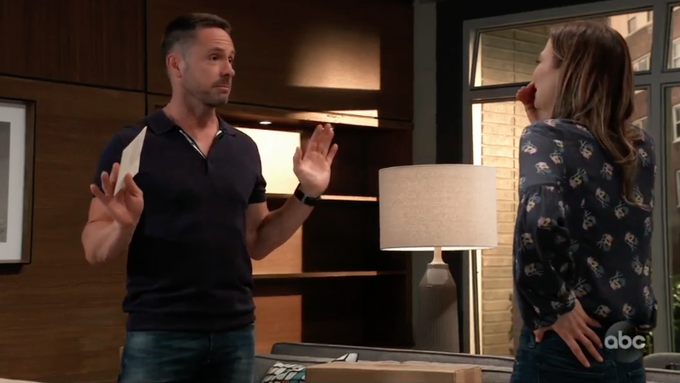 At Charlie’s Pub, Julian Jerome (William DeVry) and Olivia Quartermaine (Lisa LoCicero) go at it! Viewers will recall that in Thursday’s episode, Julian made a call to Lucy Coe (Lynn Herring).

Now that the move to Manhattan is off, Julian will want to back out of the sale of Charlie’s Pub, and this may be what Olivia is all upset about! Julian tells her there’s nothing she can do about it, and Olivia angrily responds, “Watch me”!

Laura Collins (Genie Francis) gets upset with someone as she sits at a table with them. We can see in the scene that she’s with another woman, wearing a light yellow blouse with a pattern.

The window blinds are a dark wood, so it’s possible she may be in Charlie’s Pub and witnesses Julian and Olivia’s argument, since Olivia is capable of getting loud enough to be heard back in Bensonhurst! Laura stands up at her table and like a mother talking to her two-year old toddler who’s mid-tantrum, she loudly shouts, “STOP IT!”

In the General Hospital psych ward, “Frankendrew” Franco Baldwin (Roger Howarth) has news for Elizabeth Webber (Rebecca Herbst)! Franco, who is not himself in his own mind after having been implanted with pre-2012 Andrew Cain’s (Steve Burton) memories, tells Liz she’s already lost in her fight to bring her husband Franco back from underneath all that Drew brain! Liz stands firm and will continue to until she gets her Franco back, no matter how stubborn “Frankendrew” is!

Charlie’s Pub seems to be the place to be for Port Charles residents, as Trina Robinson (Sydney Mikayla) and Cameron Webber (William Lipton) are also there! Other General Hospital spoilers tease that Josslyn Jacks (Eden McCoy) will have an emotional moment in English class, so this must be what Trina is referring to as she frantically tells Cameron that “Joss is losing it!” It’s about time that Josslyn gets some grief counseling!

Meanwhile, Josslyn is at home talking to her mother, Carly Corinthos (Laura Wright). She may be continuing the conversation about either going to boarding school or moving in with her father, Jasper Jacks (Ingo Rademacher). Josslyn explains herself and insists to her mother “the problem isn’t Dev – please! That would of course be Dev Cerci (Ashton Arbab) Joss is referring to.

General Hospital #GH Spoilers: Are Julian And Alexis Heading For A One Night Stand? @celebratesoaps https://t.co/maVflSAlhm

At the Port Charles Police Department, Sonny Corinthos (Maurice Benard) and Dev are talking about Dev being questioned about what happened aboard the Haunted Star and Sonny wants him to be prepared. He tells him if something comes up he can’t answer he should come to Sonny. Sonny may be concerned that the police will be suspicious that Dev is who he claims to be, probably since Jax has been poking his nose into things it does not belong in of late!

Also at the PCPD, Attorney Diane Miller (Carolyn Hennesy) defends Jason Morgan (Steve Burton) to Police Commissioner Jordan Ashford, (Briana Nicole Henry) who maintains a smug look on her face. Even if it was Shiloh Archer (Coby Ryan McLaughlin) who is the potential murder victim she will still want to pin the crime, if there is one, on Jason, and Diane insists that Jason was well within his rights to defend himself!

Meanwhile, Jason defends Sam McCall (Kelly Monaco), explaining that Sam saved his life! Viewers will recall from Thursday’s episode that while Shiloh and Jason struggled on board the deck of the Haunted Star, Sam appeared on the steps up to the helm with a flare gun, and shot Shiloh in the back and he tumbled overboard into the ocean and was later found dead. Sam did indeed save his life, and Jason was a little off his game by not checking that Shiloh was dead or at least incapacitated previously; neither he or Sam counted on his having worn a bulletproof vest when they found later!