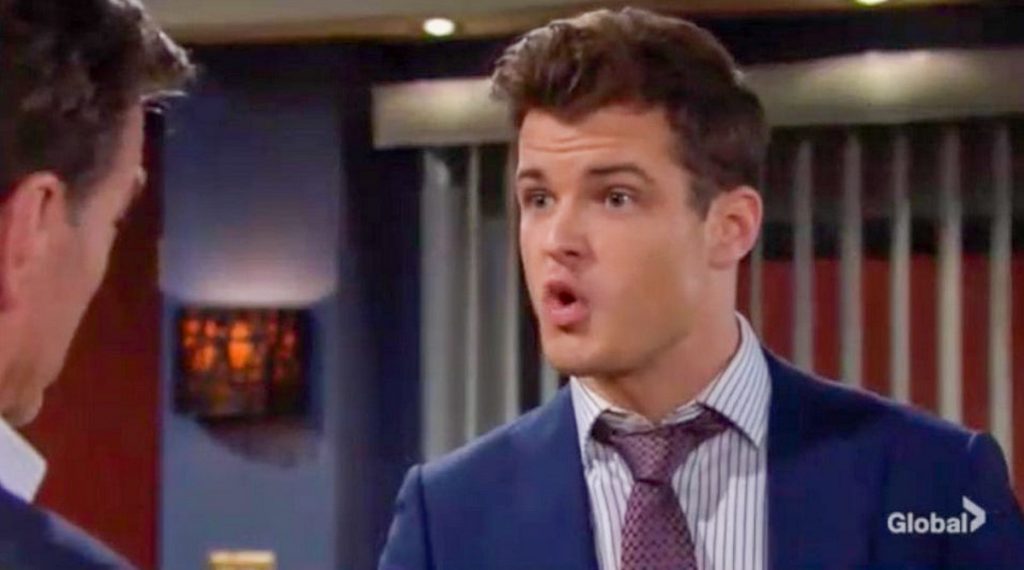 The Young and the Restless (Y&R) spoilers update for Friday, November 22, teases that some twists and turns are coming up. We should point out that impeachment hearings coverage messed with Y&R’s schedule a bit this week. However, this is what you can expect in Friday’s exciting episode.

At Devon Hamilton’s (Bryton James) penthouse, he gets support from Elena Dawson (Brytni Sarpy) as he wrestles with the will drama. Elena suggests Devon can’t be sure he was scammed, but Devon’s still upset over all this. He isn’t certain Colin Atkinson (Tristan Rogers) can be found or will come clean, but he ultimately shifts gears and counts his blessings with Elena.

In the Maldives, Jill Abbott (Jess Walton) finds Colin’s suite and insists he should come out. Colin saunters over with Champagne and wonders what took Jill so long. She realizes Colin was expecting her and is irritated over this will situation. Colin’s eager to get Jill’s mind on other things, but she wants answers.

Colin contends that he was righting a wrong and thinks he should be viewed as a hero for honoring Katherine Chancellor’s (Jeanne Cooper) wishes. He couldn’t just show up with the real pages since he wouldn’t have been believed. Jill’s upset over all the pain Colin caused and slaps him for it. She then indulges in a make-out session since Colin drives her so crazy.

Back in Genoa City, Phyllis Summers (Michelle Stafford) speaks with Nick Newman (Joshua Morrow) at Society. She reminds him that they’re consenting adults and can do whatever they want, so that leaves it open. Nick questions why Phyllis isn’t at the Grand Phoenix, so she alludes to the tension there. They settle on whether Phyllis will scorch a turkey this year as a safe topic to talk about.

After Nick and Phyllis do a little reminiscing, they end up in a video game battle on their phones. Phyllis and Nick get carried away with the competition, which leads to shouting and disturbing the other customers. After Nick admits he had a great time, Phyllis acknowledges that she did, too.

Over with Amanda Sinclair, she lets Nate Hastings (Sean Dominic) know she’s not seeing anyone. Amanda contends that she’s too busy for a romance. Nate reflects on Abby Newman (Melissa Ordway) and learning to listen when someone says that. Amanda contemplates what Devon’s reaction would be if she did date Nate.

Later, Amanda lets Nate know she values their friendship after he tells her goodnight. They share a hug, which leaves a smile on Amanda’s face. Amanda also ends up playing the jukebox at a dive bar, where she smiles again and drinks.

Over with Theo Vanderway (Tyler Johnson), he agrees to meet with Jack Abbott (Peter Bergman) at the Abbott mansion. Jack thinks Theo should stay in Genoa City and wants to know what it would take. Theo doesn’t like the thought of starting a war between Jack and Ashley Abbott (Eileen Davidson). He gets that things can get competitive between them.

Young and the Restless #YR Poll: How Do Chance Chancellor And Adam Newman REALLY Know Each Other? @celebratesoaps https://t.co/NqdPDUVXi6

Billy Abbott (Jason Thompson) explains that he’s resigning, which leads to Jack admitting he’ll be sitting in the CEO seat again. Kyle will be joint COOs with Lauren Baldwin (Tracey E. Bregman) while Summer Newman (Hunter King) gets a promotion. Once Kyle realizes they’ll still need someone to run social media, Jack drops the Theo bomb. Kyle’s visibly rattled by the shocker, but he does his best to accept it.

Theo finds Summer to bring her up to speed. She’s concerned about Theo and Kyle working, but Theo gushes over the fact that he’ll be working with Summer. After Nick makes his way home, he looks at Chelsea’s text about staying over at Adam Newman’s (Mark Grossman) place. She wants to be there in case Connor Newman (Judah Mackey) has another tough night.

The Young and the Restless spoilers say some fantastic scenes are in store, so don’t miss all the action. We’ll keep you posted as other Y&R details and rumors emerge. Stay tuned to see what’s ahead in Genoa City.