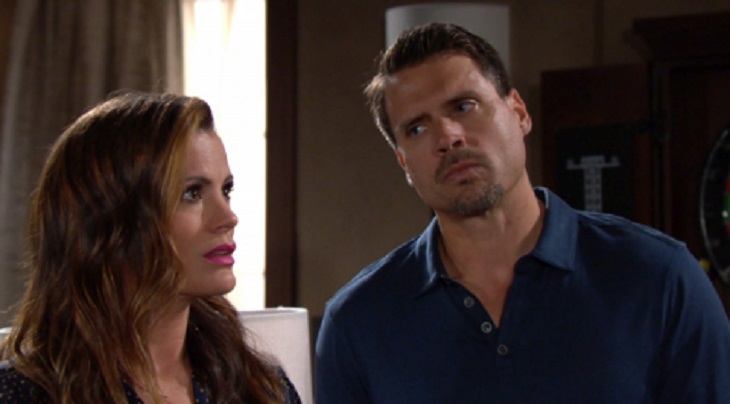 The Young and the Restless spoilers for Tuesday, July 16, tease that Billy Abbott (Jason Thompson) will be haunted by a nightmare about his daughter Delia Abbott (Sophie Pollono). He’ll awaken from the dream shaken.

At Chancellor Park, Rey Rosales (Jordi Vilasuso) will tell Nick Newman (Joshua Morrow) that Chance Chancellor (John Driscoll) was involved in things like money laundering and other shady activities in Las Vegas. This will surprise Nick, since Chance had a good reputation before. Nick will tell Rey to dig to see if Adam Newman (Mark Grossman) was involved in any criminal activities.

Next on Y&R, at Society, Jill Abbott (Jess Walton) will chat with Cane Ashby (Daniel Goddard) about his work, and they’ll discuss Traci Abbott’s (Beth Maitland) book a bit, and how Cane was the inspiration behind it. Later, Billy will arrive, and Jill will mention Cane’s upcoming trip to New York with Traci. Billy will go into protective mode and blast Cane, asking what kind of game he’s playing with his sister.

Meanwhile, at the Abbott mansion, Jack Abbott (Peter Bergman) will chat with Traci about her good mood ahead of her New York trip. Traci will encourage her brother to take on some new challenges of his own, and he’ll agree that he needs a new mountain to climb. Later, Cane will arrive, and Traci will learn about his run-in with Billy. She’ll assure him that she has no second thoughts about them traveling together, and they’ll leave for their trip.

Next on Y&R, Nikki Newman (Melody Thomas Scott) and Victor Newman (Eric Braeden) will have coffee at Crimson Lights. Nikki will suggest that they have a family dinner for the adults only…without including Adam.

Meanwhile, at Nick’s house, Chelsea Newman (Melissa Claire Egan) will hang up from a call with her mother Anita Lawson (Catherine Bach), frustrated because Anita asked about Calvin Boudreau’s (John Burke) will. Victor will then appear and the two will talk about how Chelsea has handled Connor Newman (Gunner and Ryder Gadbois) throughout this whole Adam situation. Victor will be supportive of her decision to keep Adam from Connor.

Victor will then state his desire to see Connor, and Chelsea will tell him where Connor’s camp is located. Nick will arrive, and Victor will invite both him and Chelsea to Nikki’s family dinner. After Victor leaves, Chelsea will express concern about attending the dinner lest Adam find out, but Nick will say that he wants her to be there.

Young And The Restless Spoilers – Jill and Jack Discuss Dina

Next on Y&R, Jill and Jack will chat in Chancellor Park. They’ll discuss Dina Mergeron (Marla Adams), and Jill will tell Jack that he needs to make peace with the past before he can move forward. Later, Nikki will appear and trade barbs with Jill, who will then leave. Nikki and Jack will discuss Victor, and Jack will remark that he can sense that Victor has some things going on, and that he hopes to see him back at Newman soon.

Finally, on Tuesday’s episode of Y&R, Billy will meet up with Jack at Crimson Lights. Jack will be in a funk and not acting himself, so Billy will suggest that he do some traveling, and he’ll arrange for the company jet to fly Jack to Paris so he can check on the competition and reunite with their sister Ashley Abbott (Eileen Davidson).

The Bold and the Beautiful Recap, Monday July 15: Hope Not Ready To Move On, Thomas Reassures Her