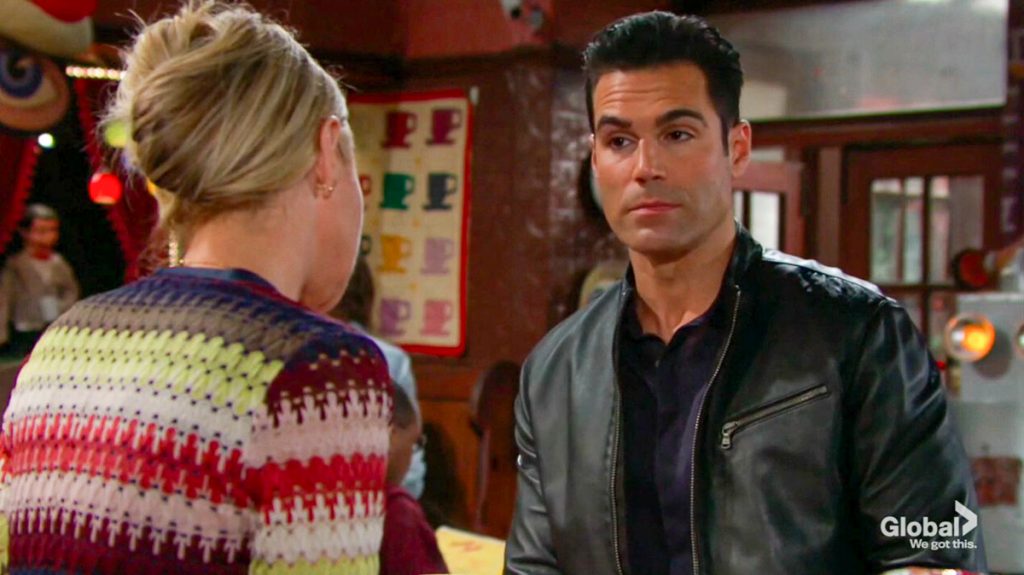 The Young and The Restless spoilers tease there’s a lot going on behind the scenes in Genoa City, with the power players doing a lot of game playing and playing detective in more ways than one! It should be a fun week of drama for Y & R fans!

At Crimson Lights, Rey Rosales (Jordi Vilasuso) flirts with Sharon Newman (Sharon Case) and talks about being a new uncle and looks at photos of his newborn nephew. Sharon also asks him if he’s there for coffee and a date, and finds out Rey is there for both. She will turn him down for a second date, and is hesitant to try romance together again since it didn’t work out before. However, they continue to talk about their relationship since Rey wants to try again, and talk about what they miss from having lived together.

In the kitchen at Society, Lola Rosales Abbott (Sasha Calle) isn’t feeling well at all…..and Abby Newman (Melissa Ordway) listens to her talk about her symptoms. Abby asks about Lola’s symptoms of dizziness, nausea, and aversion to foods, and comes up with an interesting but possibly scary theory; could Lola be – Lola fills in the word “pregnant” with a bit of a shocked look on her face. As long time Y & R viewers know, Lola was once very ill and nearly died, and would have, were it not for Summer Newman (Hunter King) donating part of her liver! Could this be a possible complication if she is pregnant? Lola should seek out an obstetrician as soon as possible!

At Crimson Lights, Amanda Sinclair (Mishael Morgan) is talking with Elena Dawson (Brytni Sarpy) and apparently is comfortable enough with her to let her guard down and she lets a major clue slip! She tells Elena that honestly, she can’t wait for this whole case to be over, and that she never should have let that old jerk get her into it! Devon Hamilton (Bryton James) is also within earshot, and pipes up, asking her what old jerk? He knows she can’t be talking about Chance Chancellor (John Driscoll)! He wants to know who the heck is she talking about?

Young and the Restless #YR Spoilers: Devon And Amanda Destined To Be Together – Elena Left Heartbroken @celebratesoaps https://t.co/tMpItLuP3P

At the Abbott house, Jack Abbott (Peter Bergman) has told Traci Abbott (Beth Maitland) about his visit with their mother, Dina Bergeron (Marla Adams) after getting a call from the assisted living facility that she’d had a fall. Luckily, it was only a sprained wrist, but when Jack had asked her for some details about when she and their father, John Abbott (Jerry Douglas) had been dating, she couldn’t say enough about a classmate of hers and John’s in high school, a man named Stuart, and raved about his beautiful eyes! Traci wonders if it could have been Stuart Brooks (Robert Colbert), who became a successful newspaper publisher and had been married for a very short time to Jill Abbott (Jess Walton) in 1978. Traci insists that if there is some kind of connection between she and Jack’s mother and Stuart Brooks, she’s going to find it!