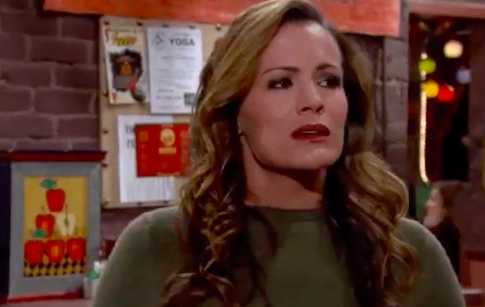 As Y & R viewers will recall, Connor Newman (Judah Mackey) was already traumatized by the off-again-on-again death of his grandfather Victor Newman (Eric Braeden) and the subsequent moving to Las Vegas by his father Adam Newman (Mark Grossman), so Nick Newman (Joshua Morrow) went to Vegas and convinced Adam to come back for Connor’s sake.

Then he was traumatized even more at the Grand Phoenix, when he, his mom and his dad and his Aunt Abby Newman (Melissa Ordway) were at the center of a hostage situation created by a nasty probable loan shark named Simon Black (Jeffrey Vincent Parise) after payback from Chelsea for the dirty money of her late husband Calvin Boudreau’s (John Burke) that she had recently had laundered by Kevin Fisher (Greg Rikaart). Connor has been wanting his parents to reconcile permanently, but they have tried to deflect that desire – however, Nick is getting a little tired of not having his girlfriend with him, but over at his brother’s, even if it is for Connor’s sake!

Y&R Spoilers – Could Chelsea Lawson’s Loyalties Be Torn Between Her Man And Her Son?

Could this situation be shaping up to Chelsea’s loyalties being torn between her man and her son? Nick doesn’t want to even go there, expecting her to choose between him and Connor, after all, Christian Newman (Alex Wilson) could use a mother or a mother figure as well! Right now, it’s just Nick and Christian, although that has been going on for a while anyway. Summer Newman (Hunter King) lives at home with her dad sometimes and may stay there a little more often with Chelsea being away. A big sister nearly old enough to be your mom is better than nothing!

The Young and The Restless Spoilers: Ashley Comes Home For Thanksgiving – Will She And Jack Fight Over Theo? @celebratesoaps #YR #youngandrestless https://t.co/emRohSREji

However, Nick could come to the conclusion, even though he has been placed in the rather uncomfortable position of being on the outside looking in, that Connor is playing his mom and maybe his dad, Adam, as well, to get them back together! Nick could see that the whole reason for Connor acting out is not because of trauma, but because he is his father Adam’s son – a conniving little manipulator!

Looking at Connor through THAT set of lenses could very well result in Nick forcing Chelsea to choose between him and Connor and the need to discipline Connor properly instead of coddling him and giving in to his demands! But if Nick takes that attitude it is very likely that Connor will succeed in his pint-sized manipulations and Chelsea will be driven away from Nick, and back to Adam! After all, Nick is a grown man, and Connor is her baby!

General Hospital Spoilers: Laura And Jax Get A Surprise Visitor – Or Will It Be Two?