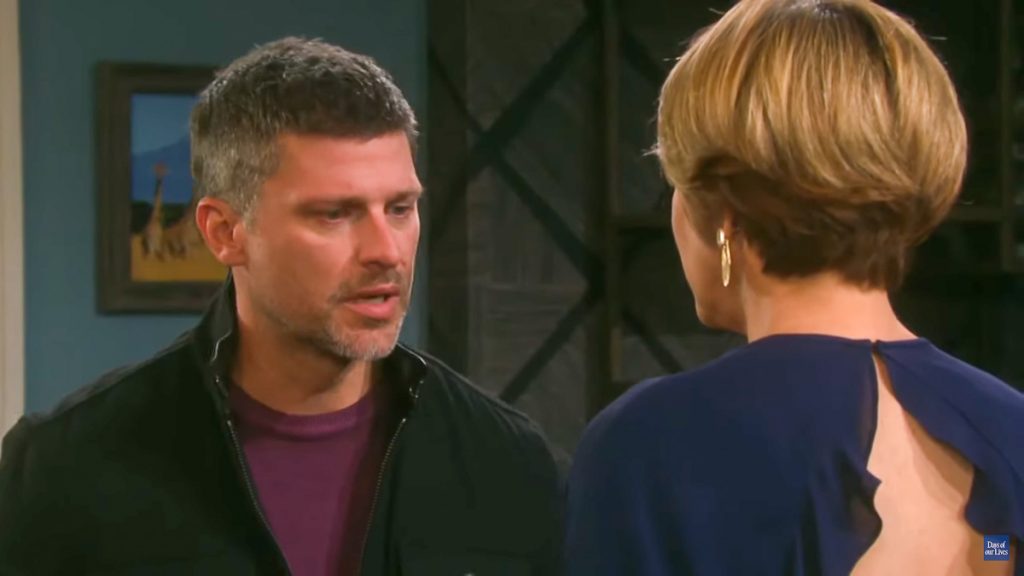 Days of Our Lives spoilers reveal Eric Brady (Greg Vaughan) has a plan to make his new blended family work. He wants to be an active father to Mackenzie “Mickey” Horton (the May twins) and work with Sarah Horton (Linsey Godfrey) on custody and visitation. However, he wants Nicole Walker (Arianne Zucker) to be by his side as they go through this together.

DOOL spoilers tease that Nicole has a surprising reaction to Eric’s marriage proposal. Instead of saying yes, she gives him the opposite answer. That’s right, she will say no to marrying him. However, it’s not because she doesn’t want to spend the rest of her life with him. It’s because she’s carrying a huge secret and can’t keep it from him any longer.

It is revealed that Nicole will tell Eric that Mickey is his little girl. He reacts with shock, then it will turn into anger. Not necessarily toward Sarah, but his rage will be directed at the person who has been fathering the child — former bad boy Xander Cook Kiriakis (Paul Telfer). He goes over to the Kiriakis mansion and demands his daughter.

Days of Our Lives spoilers suggest that Eric will want to get Xander out of his daughter’s life. Granted, the man used to be a villain and did horrible things to people, including Nicole. What he doesn’t accept though, is that Xander is a changed man. Loving Sarah — and being a dad to Mickey — has had a profound effect on Salem’s former bad boy. But Eric doesn’t care about any of that.

Days of Our Lives Spoilers: Lani Tells Kristen About Gabi – Will Villainess Get Revenge for New Friend? @celebratesoaps https://t.co/ZXX5ruwraY

According to the latest issue of Soap Opera Digest, Eric also has another feeling about finding out he is a father. It is an absolute joy. It is something that he has always dreamed of and now he gets to live it (once he gets through the whole Xander situation, of course). What makes it even better is that he gets to do it with Nicole at his side.

Even though many families like this would fail, Eric, Nicole and Sarah are sure to make it a success. That doesn’t mean it will be easy, but they are all dedicated to doing what is best for Mickey and that is what’s important.