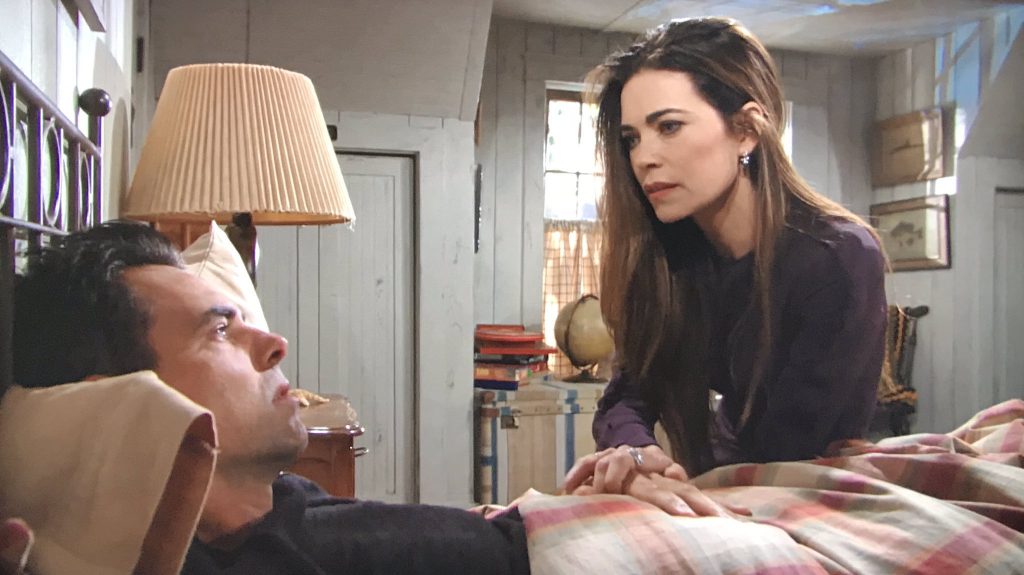 The Young and the Restless spoilers tease that Billy Abbott (Jason Thompson) is spiraling out of control. As many fans know, he is going through a lot of emotional pain and things just seem to be getting worse by the day. He himself knows that he is in trouble. However, there’s one person who might or might not be able to save him: Victoria Newman (Amelia Heinle). Here’s what you need to know.

According to CBS Soaps in Depth, even though Kevin Fisher (Greg Rikaart) and Chloe Mitchell (Elizabeth Hendrickson) have been doing everything they can to keep a disturbed Billy sedated and in check at the Chancellor boathouse, Billy still wants to see Victoria. When Victoria finally arrives, Billy is sleeping while Chloe is detailing the extent of Billy’s stress. Needless to say, she is shocked by what she hears. Victoria wants to help him but just doesn’t know where to start.

Billy Abbott Is Locked Inside Of Himself And Crying For Help

Jason Thompson, who plays Billy on the hit CBS soap, told the publication in a recent interview, “Billy is locked inside himself and he needs to deal with it in some way. I think it’s very scary for him. He knows he’s in trouble but doesn’t know how to get out. That’s why he wants Victoria.”

Unfortunately, as Victoria tries to talk to Billy about his actions, he’s also hit with pieces of memories that he doesn’t understand. He also tries to fight and ignore them. Jason adds, “There’s this other side of Billy that he thinks is weak. He can’t forgive himself for Delia’s death and he can’t move forward with his life either.”

Even though Victoria sees his struggle, there is only so much that she can do. Plus, as many The Young and the Restless fans will remember, Billy isn’t the only person in Victoria’s life who has dealt with a lot of emotional problems. There was also JT Hellstrom, who turned out to have a mysterious brain tumor that caused a lot of havoc for him in his head. Could this also be Billy’s problem, too? Perhaps.