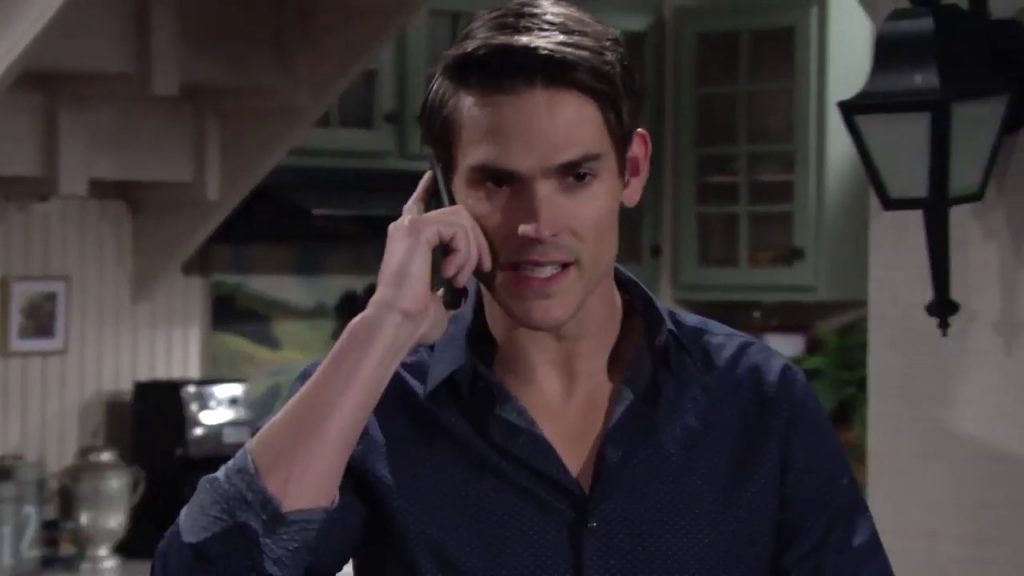 The Young and the Restless spoilers for Monday, September 16, tease that Victor Newman’s (Eric Braeden) body will have already been taken from the ranch, as everyone in the room appears to be heartbroken. As Y&R viewers will remember, Victor experienced a health crisis and collapsed, while his family looked on in horror.

Adam Newman (Mark Grossman) will be particularly upset, and Nick Newman (Joshua Morrow) will blast his brother for wanting revenge when Victor was fighting for his life. The brothers will argue back and forth as Abby Newman (Melissa Ordway) and Summer Newman (Hunter King) take Nikki Newman (Melody Thomas Scott) out of the room.

Later, Adam will return home to the penthouse. Phyllis Summers (Michelle Stafford) will be waiting for him, and she’ll be stunned to hear that Victor’s dead. She’ll wonder if Adam’s tampering with Victor’s medication could have done it, but she’ll think it may have had nothing to do with what happened. Adam will say that he only wanted Victor weakened so he could attack Newman Enterprises.

Phyllis will then call Summer, who will tell her not to come to the ranch but will promise to call later. Adam will moan about being exiled from the ranch and the family, and Phyllis will sense that he wants to be alone. He’ll say that it’s hard to fathom a world without Victor in it.

Next on Y&R, Billy Abbott (Jason Thompson) will come to at the boathouse, but he won’t remember talking with Victoria Newman (Amelia Heinle) earlier. Victoria will indicate that it seemed like she was talking to someone different. They’ll talk about the attempt on Adam’s life, and Billy will say that he knows he’s not right, but he doesn’t believe Chloe Mitchell’s (Elizabeth Hendrickson) story about him trying to kill Adam.

Billy will have a flashback to being behind the wheel, and to Victoria asking him about his gum-chewing, then he’ll try to get up but fall and have more flashbacks. Victoria will manage to get him back into bed as he struggles with what’s going on inside him. Victoria will tell him that he’s been there for her in the past, and she’s here for him now. Ultimately, Billy will remember trying to run over Adam.

Next on Y&R, Jack Abbott (Peter Bergman) will be at the spa in Arizona when he notices Sharon Newman (Sharon Case) there as well. He’ll say it might be fate, and they’ll share with each other their reasons for wanting to get away. They’ll spend time together talking – first about the mass drugging at The Grand Phoenix, and then talk will turn to Dina Mergeron (Marla Adams).

Jack and Sharon will talk about their various relationships, and they’ll realize together that they’ve each defined themselves by their relationships in the past. Sharon will share about what happened with Rey Rosales (Jordi Vilasuso) and with Adam. They’ll ultimately be happy that they both ended up together at the same spa, and they’ll share a toast.

Finally, on Monday’s new episode of Y&R, Nick will comfort Summer, and everyone will be distraught that they haven’t heard back from Victoria yet. Nick will update that he’s called Noah Newman (Robert Adamson) and will have to tell Faith Newman (Alyvia Alyn Lind) about what’s happened.

Nate Hastings (Sean Dominic) will say that he did everything he could to help Victor. The family will head to the dining room to eat something, but Nick and Nikki will linger in the living room and exchange a look, then go on to the kitchen.

The Bold and the Beautiful Spoilers Monday, September 16: Ridge Stunned To Wake Up Next To Shauna – Brooke Gets Support From Eric