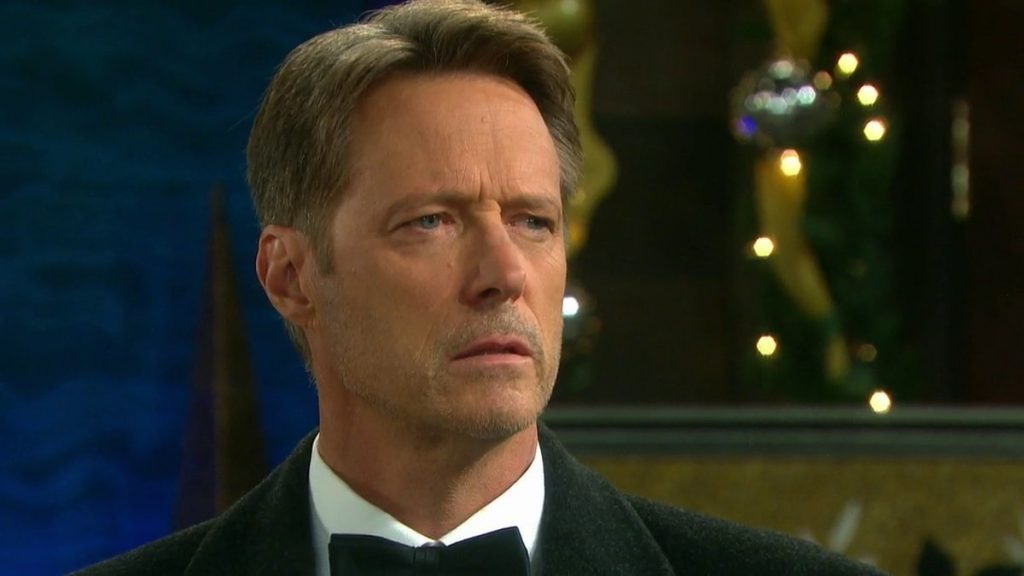 Days of Our Lives spoilers tease that Tuesday, November 12 will be another day of exciting drama for Days of Our Lives viewers! Remember, Salem has jumped one year ahead in time, so some scenes may be current while others may be flashbacks!

Jack Deveraux (Matthew Ashford) informs Jennifer Deveraux (Melissa Reeves) that the person responsible for her fall is in prison. As Days of Our Lives viewers will recall, Jennifer took a tumble off the balcony of “The Bistro”, a restaurant where Eli Grant (Lamon Archey) and Lani Price (Sal Stowers) had already set up for their wedding reception which didn’t happen, and Eli was gracious enough to tell the two other couples that did complete their vows, Jack and Jennifer and Justin and Adrienne Kiriakis (Wally Kurth, Judi Evans) to use the venue and the reservation for their own double reception.

Jennifer was pushed, and Jack suspected Eve Donovan, (Kassie DePaiva) based on a shadow that Detective Rafe Hernandez (Galen Gering) saw in security tapes, and that Eve stumbled into the double wedding and made threats. It didn’t help Eve’s case that she told Roman Brady (Josh Taylor) who is a former police chief that she thought Jennifer should die!

Sonny Kiriakis (Freddie Smith) gets aquainted with Rafe’s new “manny”, Evan (Brock Kelly). Rafe now has hired a male nanny to help take care of the orphaned baby David Ridgeway (most recently Dexter and Jaxton Ellis, to be SORASED) who he has full custody of now, and may even have adopted during the past year since his only other living relatives are in prison.

A lonely Sonny is glad for all the friends he can get, since his husband Will Horton (Chandler Massey) is also in prison. He really misses Will, and the latest Days of Our Lives promo, “Flash Forward) shows him sitting with Arianna Horton (Sydney Brower) and Evan, who has David in a baby buggy.

Meanwhile, Ciara Brady (Victoria Konefal) is now in the Titan Executive program and is talking about Ben Weston (Robert Scott Wilson), who is in prison for the murder of his sister, Jordan Ridgeway (Chrishell Hartley). She tells her grandfather that she has given up on Ben, apparently changing her mind and heart over the past year – or has she? Days of Our Lives viewers will recall that before the time jump, Ben had become desperate and had asked Victor to put a hit out on her, worried about Ciara, and before that, Victor had tried to strangle Ben right in the Kiriakis living room, and would have, if Brady Black (Eric Martsolf) hadn’t intervened! Perhaps Ben isn’t the guilty one after all!

Meanwhile, after a year, Hope Brady (Kristian Alfonso) is still Princess Gina, and has a shocking new companion! The preview shows a male hand with a DiMera ring, bearing a cigar, and playing chess! Princess Gina wants to know what the man thinks about something and calls him “Steffy!” Could it be? Or is he a doppelganger?