Brytni Sarpy is keeping herself busy as she gets booked in another soap opera and lands several other TV gigs. With her experience, skills, and acting talent, it’s not surprising to see her rise to stardom.

Apart from appearing in commercials for large brands like Nike, Yahoo, and New Balance, Sarpi, her other TV credits include “My Crazy Ex,” and “New Girl.” Earlier this year, she was cast in a TV movie “The Wrong Husband” and recently joined the cast of “The Haves and the Have Nots,” where she will have a recurring role on the show’s seventh season.

Former “General Hospital” Valerie Spencer, Sarpy is enjoying her new home at the CBS soap, “The Young and The Restless,” as Elena Dawson. She first appeared on the soap last March and described her stay as “nothing short of peaceful and pleasant,” per Soap Opera Digest. She also had an easy transition from one soap to another plus, she likes the people in Y&R. She immediately made friends. 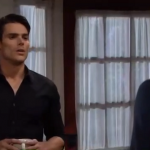 She absolutely adores Bryton James, who portrays Devon Hamilton, who is a potential love interest of her alter ego. They had good chemistry off-screen and on-screen, making her feel more excited about the Devon/Elena storyline.

She teased, “It’s going a little quicker than I thought it would but in a good way. I think that they’re finding a lot of layers with everything that’s happening with Neil Winters and Devon having lost his wife. Devon and Elena both have experienced loss, and the amount of bonding that they’re having, they’re going a lot deeper than the surface level of the relationship. We’re getting into the depth of things.”

However, Sarpi also admitted that she’s a bit anxious as to how viewers of “The Young and the Restless” will respond to the Devon and Elena pairing. She recalled fans’ animosity towards Valerie when she came between Dante and Lulu in “General Hospital.”

“I definitely had a lot of apprehension and I’m treading lightly,” she explained. “However, I think that enough time has passed [since Hilary died] and the connection between Devon and Elena is rooted enough that it’s seen as something real. From my perspective, the fans are really gravitating toward them being together.”