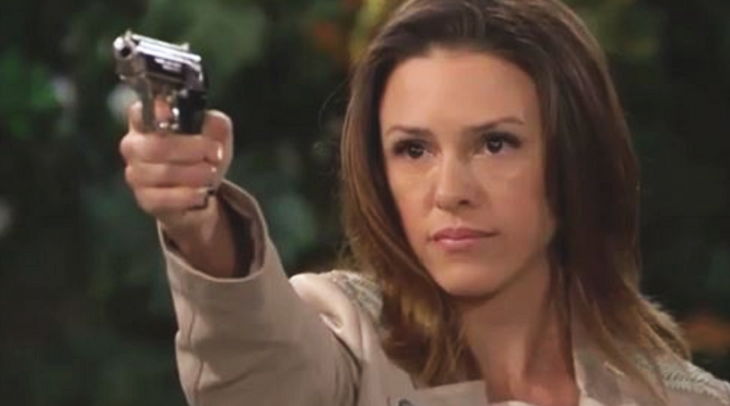 General Hospital (GH) comings and goings indicate that actress Elizabeth Hendrickson (Margaux Dawson) will soon be leaving Port Charles. That’s because she will be going back to her old role as Chloe Mitchell on the hit CBS soap The Young and the Restless. Here’s what you need to know about what’s ahead on GH.

Elizabeth made her way back to the daytime television sphere in May of 2018 when it was announced that she would be starring as the beautiful and smart district attorney Margaux Dawson. She began her run on General Hospital as a prosecutor in Carly Corinthos’ (Laura Wright) case.

Carly was accused of pushing down a then pregnant Nelle Benson (Chloe Lanier) during her baby shower at the Quartermaine mansion. Margaux was also determined to convict Sonny Corinthos (Maurice Benard) and his organization for all of their crimes. However, she ended up falling for him, despite the fact that he is married to Carly.

Back in September of last year, it was found that Margaux’s father was involved in the mob and he was ultimately killed because of it. Also, Kim Nero (Tamara Braun) has mentioned on occasion that Margaux looks like a familiar face from her past.

Now, as far as what’s in store for Chloe Mitchell on The Young and the Restless remains to be seen! Elizabeth first played the role in 2008 all the way up to 2017. However, there’s a good chance that she might be showing up with Kevin Fisher (Greg Rikaart) as he is expected to be returning to Genoa City in the next several weeks.

Hey #GH fans,
Is Margaux a member of DoD? If so, who was her trust statement about? Read more below 🔽🔽🔽🔽🔽https://t.co/qY00Q0RoMw

The last time fans saw Chloe, she faked her death just so she and Kevin could move to Portland, Oregon, where they are believed to be raising their daughter Bella. They are supposedly living there under different names. However, the last time Kevin returned to Genoa City with Bella, there was no mention of Chloe.

So far Elizabeth herself has not made any comments about her departure from Port Charles or her impending arrival to Genoa City, but it’s without a doubt that fans can’t wait to see her in action very soon! We will update you with more information as it comes in.