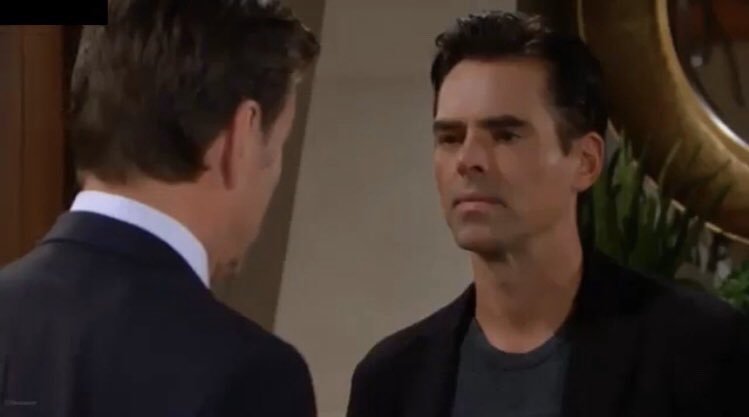 Last week on The Young And The Restless (Y&R), Devon Hamilton (Bryton James) was flabbergasted when he encountered Hilary Curtis’ (Mishael Morgan) double. Also, Billy Abbott (Jason Thompson) battled his demons in an outstanding stand-alone episode. And viewers were in shock when the great Victor Newman (Eric Braeden) was pronounced dead and everyone dealt with the ramifications of his passing.

Genoa City residents handled the news of Victor’s “death” in different ways. Phyllis Summers (Michelle Stafford) said she was glad he was dead, as he had ruined her life and her relationship with Jack Abbott (Peter Bergman). Adam Newman (Mark Grossman) felt guilty and responsible, as he should have.

But the most surprising reaction was Jack Abbott’s (Peter Bergman). He got a little teary-eyed and toasted Victor with some tequila at Y&R’s Society, which seemed totally out of character. Yes, Jack is definitely a nice guy, but he had hated Victor his whole life.

Young And The Restless Spoilers – The Many Deaths Of Victor Newman

This certainly wasn’t the first time Victor has supposedly died on Y&R and it probably won’t be the last. In 1984, the Mustache faked his death to deceive Eve Howard (Margaret Mason), who had tried to poison him so her son could inherit his millions.

In 1993, an angry Victor left Genoa City, after facing major problems in his marriage to Nikki Newman (Melody Thomas Scott). He ended up losing everything when he was robbed on the highway. A badly burned body was found in his car and everyone thought he was dead. But in reality, he was hanging out at Hope Adam’s (Signy Coleman) farm, falling in love and conceiving Adam.

Victor faked his death again in 2008, when he was supposedly killed in a shipwreck in Mexico and then in 2012, his family thought he’d been killed in dock explosion. So, viewers can take heart that his latest “death” is likely just another in a long line of Victor Newman back from the dead storylines.

Speaking of returning from the dead, Devon got quite the shock when he opened the door of his penthouse only to find Hilary’s doppelganger standing in his hallway. She introduced herself as Amber Sinclair, Chance Chancellor’s lawyer. She seemed genuinely surprised when Devon told her she looked just like his deceased wife. But was she really, or is she part of an intricate set-up to ruin Devon’s life?

The highlight on Y&R this week was Billy’s struggle with himself. First though, he confessed to Victoria Newman (Amelia Heinle) that he had tried to run Adam over with his car. When Victoria left him alone in the boathouse, Billy took a nap, only to awaken to a vision of his deceased daughter Delia Abbott (Sophie Pollono). He also had visions of his brother Jack, his mother Jill Abbott (Jess Walton), Phyllis and Adam himself.

Billy eventually punched his alter, who disappeared, and he then pronounced himself cured. But is this really the last Y&R viewers will see of Billy’s dark side? And do you think Victor faked his death again, this time to con Adam? Let us know in our comments section.

Five Key Takeaways From This Week’s Days of Our Lives: Lucas Makes A Hard Decision – Jennifer Is Rescued – Sibling Rivalry Over A Baby – Kate’s Attacker Revealed To Police – Two Women And An Embryo