Five Key Takeaways From This Week’s Days of Our Lives: Lucas Makes A Hard Decision – Jennifer Is Rescued – Sibling Rivalry Over A Baby – Kate’s Attacker Revealed To Police – Two Women And An Embryo 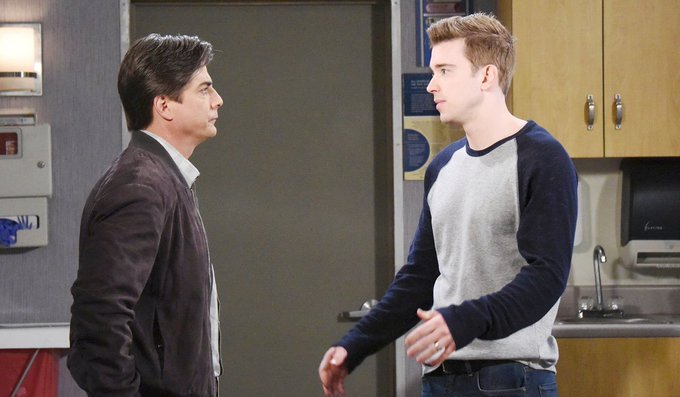 Days of Our lives spoilers tease that there are five key takeaways that Days of Our Lives fans need to watch for during the week of Monday, September 23 through Friday, September 27. Here’s what you need to know.

Lucas Horton (Bryan Datillo) is faced with a difficult decision. He will speak to Dr. Kayla Johnson (Mary Beth Evans) about his mother, Kate Roberts DiMera (Lauren Koslow) being on life support. At the same time, his dear cousin, Julie Williams (Susan Seaforth Hayes) is also in Salem University Hospital. She is desperately in need of a heart transplant but too old to be put on the traditional transplant list. Kate’s chances of coming out of her coma are not good. Lucas decides to see if Kate would be a donor match so that Julie could get Kate’s heart. Hope Brady (Kristian Alfonso) is surprised by Lucas’ suggestion, and later Eli Grant (Lamon Archey) and Lani Price (Sal Stowers) will learn that Lucas has decided to give Kate’s heart to Julie, and he and his son Will Horton (Chandler Massey) will say a tearful farewell to Kate.

Jennifer Horton (Melissa Reeves) will be rescued this week, with Jack Deveraux (Matthew Ashford) to the rescue! In the meantime, Jennifer will try to gain her former suitor Dr. Henry Shah’s (Piter Marek) trust, until Jack tracks her down and has a showdown with Shah! The Days of Our Lives weekly preview also shows that this will lead to Jack ultimately regaining his memories without the help of a serum, and will remember Jennifer!

Days of Our Lives Spoilers – Sibling Rivalry Over A Baby

Hope will learn that Jordan Ridgeway (Chrishell Hartley) has moved in with her ex-husband Rafe Hernandez (Galen Gering) which will probably be another stressor in addition to her worries over Julie and the missing Jennifer. Meanwhile, there will be some serious sibling rivalry between Jordan and Ben Weston (Robert Scott Wilson) over baby David Ridgeway (Jaxton and Dexter Ellis) who Ben wants to have access to as his uncle. Ben will ask Dr. Marlena Evans (Deidre Hall) if she can help with Jordan and getting her to see Ben would be safe with David, while Jordan will vow to kill anyone who comes between her and David!

Gabi Hernandez DiMera (Camila Banus) will be torn at first when Will asks her if Vivian Alamain (Robin Strasser) shot his grandma Kate, because Gabi’s husband, Stefan DiMera (Brandon Barash) is pressuring her to keep his mother’s deadly secret! However, later in the week she overhears Vivian telling Stefan that he would be better off with Eve Donovan (Kassie DePaiva) as a wife than with Gabi! Will then tells Rafe to arrest Vivian!

Days of Our Lives Spoilers – Two Women And An Embryo

Brady Black (Eric Martsolf) will confide in Sonny Kiriakis (Freddie Smith) about his difficulty in fighting off his attractions to Kristen DiMera (Stacy Haiduk) while Kristen plots to win him back in some unorthodox ways! She will enlist Dr. Wilhelm Rolf (William Utay) to follow along behind Sarah Horton (Linsey Godfrey) to her planned abortion, retrieve the embryo, and transplant it in Kristen so she can tell Brady it’s his! Longtime Days of Our Lives viewers will recall this is not the first time Kristen’s pulled this stunt! However, Sarah has second thoughts about terminating her pregnancy, although it goes as far as her being put under for the procedure, and then decides to keep her baby after all; this will be some time after Rolf refuses at the last minute to implant the embryo. Kristin will be livid, but then anger will turn to joy when Rolf explains that Kristin is already pregnant with her own baby and Sarah’s embryo won’t be needed! Brady and Sarah will try to bolster one another over the havoc Kristin has created!

That’s all for this week’s Five Key Takeaways From Days Of Our Lives. Stay tuned to the show, and keep checking Days of Our Lives spoilers frequently for all the latest news, updates and developments!

The Young and the Restless Spoilers: Devon Rightfully Suspicions of Hilary Look-A-Like – Slick Game of Chance Being Played