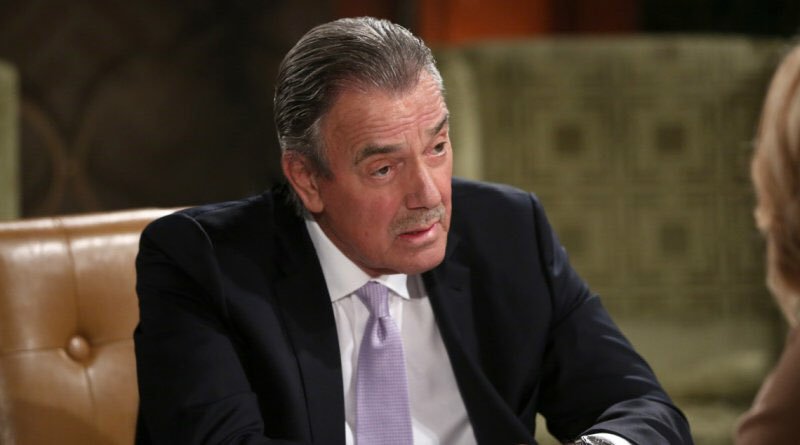 The Young and the Restless spoilers for Monday, September 23, tease that Nikki Newman (Melody Thomas Scott) and Billy Abbott (Jason Thompson) will hear from Victoria Newman (Amelia Heinle) about what the police found in her office. Billy will say that Adam Newman (Mark Grossman) framed her, and Nikki will be in disbelief that things have gone this far. Victoria will note that Adam was willing to let Victor Newman (Eric Braeden) die.

Jack Abbott (Peter Bergman) will then arrive and opine that Adam wouldn’t do something like this, but Victoria will say that Adam’s changed. Jack will be happy that Billy got help, and that they should let the authorities decide is someone is to blame for Victor’s death.

Next on Y&R, Michael Baldwin (Christian LeBlanc) will arrive at Adam’s place, and Adam will want to know why Victoria hasn’t been charged for Victor’s murder. Michael will say that there’s a lack of motive, and Adam will remind Michael about Fenmore “Fen” Baldwin’s (Zach Tinker) fate if Michael doesn’t comply. He’ll insist that Michael make Victoria’s arrest happen.

Over at Nick Newman’s (Joshua Morrow) house, he and Chelsea Lawson (Melissa Claire Egan) will talk about Adam and his ongoing desire to see Connor Newman (Judah Mackey). She’ll be worried about telling Connor about Victor’s death as well. Nick won’t think that they can put it off any longer. She’ll also worry about the possibility that Adam is responsible for Victor’s death. She’ll want to grab Connor and run, then she’ll apologize for saint that. She’ll then get a call from Adam, who will want to see Connor.

Next on Y&R, at Devon Hamilton’s (Bryton James) penthouse, he and Elena Dawson (Brytni Sarpy) will discuss Devon’s meeting with Amanda Sinclair (Mishael Morgan). He’ll reveal that Chance Chancellor (John Driscoll) is behind it, and he’ll tell her the details of how there’s supposedly another draft of the will out there. But Devon will say that he knows Katherine Chancellor (Jeanne Cooper) wrote the will, as they are definitely her words.

Elena will listen to Devon read some excerpts from Katherine’s will, and she’ll be amazed by how much Devon actually inherited and she’ll say that he’s done good with the fortune. Devon will say that he won’t let Chance and Amanda have the next move, and he’ll leave. Nate Hastings (Sean Dominic) will then arrive, with Elena offering to listen if he needs to talk about Victor.

At Crimson Lights, Amanda will talk with someone on the phone, telling them to stop dodging her calls. She’ll tell the person that they can’t move forward until she talks to them.

At The Grand Phoenix, Devon will meet with Jill Abbott (Jess Walton) about the Amanda situation, and he’ll note that it seems like a shakedown. Jill will say that Chance wouldn’t be involved in something like this, and Devon will say that whoever sent Amanda is messed up. Jill will wonder if she’s behind the whole thing, and Devon will confess that she looks like Hilary Hamilton (Mishael Morgan). That will make Jill even more convinced that Amanda is behind this.

Devon will then see Amanda as he’s walking out. Amanda will say that he’ll soon have proof of the claims, and that Chance won’t charge him with anything assuming that he had no knowledge of Tucker McCall’s (Stephen Nichols) fraud. Devon will take issue at the term “fraud” since she looks just like Hilary.

Amanda will then warn Devon to get a lawyer and get prepared, and Devon will tell her to stay away from him and the people he loves, but Amanda will fire back that she doesn’t take orders. They’ll bicker, then she’ll walk away and call someone, saying that the clock is ticking, and nothing happens until she hears from them.

Next on Y&R, at Crimson Lights, Michael will talk with Lauren Baldwin (Tracey E. Bregman), who will have just returned from securing Fen into rehab. She’ll be peeved with Adam and say that she’s had enough, but Michael won’t want her anywhere near the man. He won’t want her to be Adam’s target, too. Michael will explain that Adam wants him to charge Victoria with Victor’s murder, and Lauren will put two and two together and realize that Adam killed Victor. Michael will say that he knows what he’s going to do.

At Society, Victoria, Billy, Nick, and Nikki will be discussing Adam and his war on the family when Rey Rosales (Jordi Vilasuso) will arrive and promptly announce that he has a warrant for Victoria’s arrest. He’ll cuff her right there.

Finally, on Monday’s new episode of Y&R, Nikki will arrive home and call out to someone, saying that something terrible has happened and that “it’s all gone wrong.” Suddenly, Victor will appear.