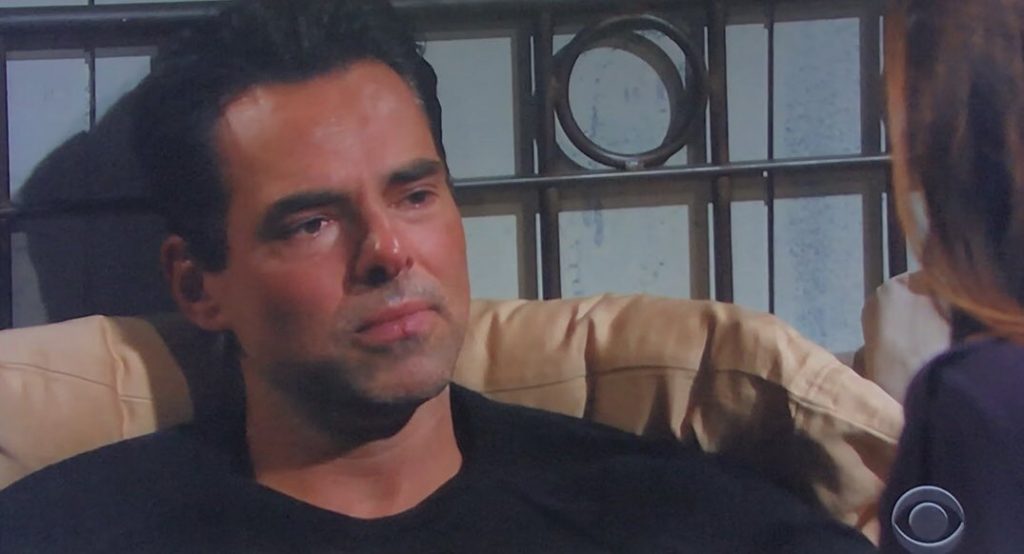 The Young and the Restless spoilers tease that “Bad Billy” , Billy Abbott’s (Jason Thompson) DID alter, could re-emerge and go after Adam Newman (Mark Grossman) after the arrest of Victoria Newman (Amelia Heinle)!

The Young and The Restless viewers will recall that Billy is very emotionally dependent on Victoria, he describes her as “his rock” and the one who keeps him sane. In last week’s shows, she helped regular Billy win over his dark side which came out as an alter, which we will call “Bad Billy” in a memorable scene where he punched Bad Billy and he crumbled and disappeared. But the question is, will Good Billy be strong enough to keep winning over Bad Billy when he witnesses the arrest of Victoria for the murder of her father, Victor Newman (Eric Braeden)?

Victoria’s brother, Adam paid a pharmacist on the take make double dose pills of Victor’s experimental medication he took for his rare blood disease, only meaning to disable Victor, not to kill him. However, Victor died, and blood tests that Dr. Nate Hastings (Sean Dominic) took on Victor showed too much of that medication in him, and since it is an experimental medication it would not be provable that it did kill him but not provable that it didn’t, either. Y & R viewers know that Victoria was with Billy when Victor died and when he took the double dosed pills, but unless Chloe Mitchell (Elizabeth Hendrickson) and Kevin Mitchell (Greg Rikaart) come forward and alibi Victoria, Billy’s alibi may not be enough since he was not in his right mind totally during the time!

Adam framed his sister Victoria for murder, planting both a vial of the double dose pills and Nate’s stolen laptop in her desk at work, and paid the pharmacist again to testify that Victoria was the one who paid for the deadly double dose pills! Adam will push newly appointed District Attorney Michael Baldwin (Christian LeBlanc) to make sure Victoria is arrested and Rey Rosales (Jordi Vilasuso) will interrupt Billy, Victoria, Nikki Newman (Melody Thomas Scott) and Nick Newman (Joshua Morrow) while they are having lunch at Society, and arrest Victoria! Billy will immediately accuse Adam of a frameup!

The murder charges won’t stick since it will be revealed that Victor was playing dead, the whole family working together to teach Adam a lesson, but the framing of Victoria by Adam may still jar something badly enough in Billy that Bad Billy may try to come to the surface and again want to go after Adam! The “healing” was too fresh and too amateur and Billy needs to get into proper psychiatric care as soon as possible so that the alter doesn’t re-emerge and Billy put himself in a position of being Victoria’s roommate in a place that they don’t want to live!