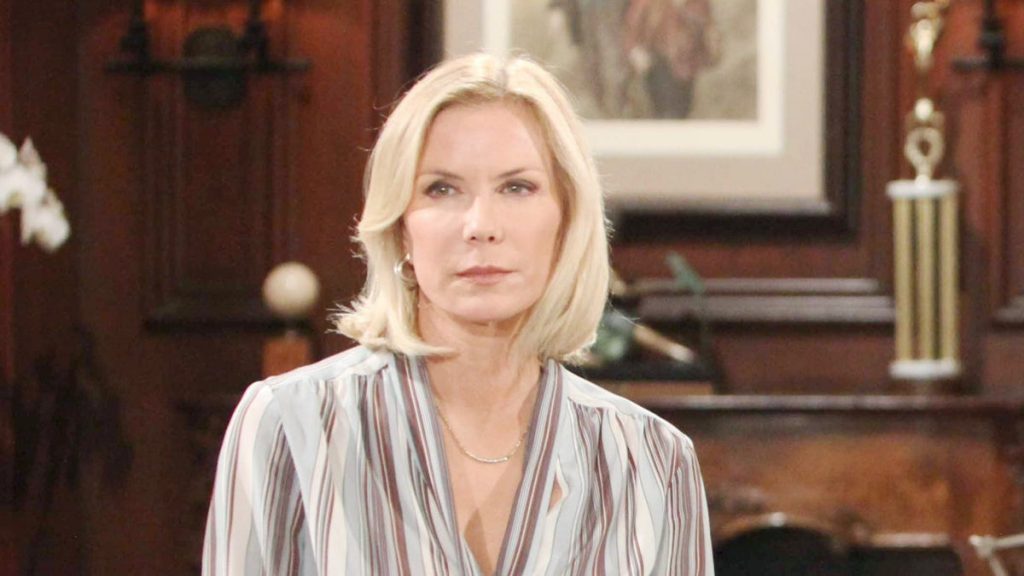 The Bold and the Beautiful spoilers for Wednesday, September 11, tease that Brooke Forrester (Katherine Kelly Lang) will get some disturbing news. As B&B viewers know, Ridge Forrester (Thorsten Kaye) just agreed to an immunity deal for Flo Fulton (Katrina Bowden). He was approached by Detective Alex Sanchez (Jeremy Ray Valdez) about the deal, and according to Detective Sanchez, Thomas Forrester (Matthew Atkinson) would benefit from the deal, too, because then his actions wouldn’t come up at Flo’s trial.

So, Ridge told Detective Sanchez that the Forrester family would sign off on the immunity deal for Flo, which means that Flo will go totally free and avoid prosecution for her crimes in connection with Beth Spencer’s (River Davidson and Madeline Valdez) illegal adoption. That’s left Flo and her mother Shauna Fulton (Denise Richards) incredibly grateful. But it’s not going to be happy news for Brooke. 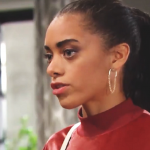 Ultimately, Ridge will have to explain his decision to the entire Forrester and Logan families, which will be difficult enough, but on Wednesday’s B&B episode he’ll have to tell Brooke about Flo going free. Ridge will head home from the jail, and he’ll find Brooke at home. He’ll bite the bullet and tell her they need to talk, and he’ll proceed to tell her about Flo’s immunity deal the fact that she’s going free.

Expect a major argument between Brooke and Ridge, as Brook reels from the news. She can’t stand Flo and what she did to Hope Logan (Annika Noelle). All she wants is for both Flo and Thomas to pay for what they did to Hope, and as a result of Ridge’s actions, neither is going to end up being held accountable for their actions.

Plus, Brooke will be upset that Ridge made the decision to sign off on Flo’s deal all on his own. Brooke will certainly feel that Ridge should have come home and discussed the deal with her and the rest of the family. But the decision will have been made, and there won’t be anything that Brooke can do about it, other than to rail against Ridge and let it be known how upset she is. Look for some serious marital problems between Ridge and Brooke going forward from here.

Bold and the Beautiful News: John McCook Has Something To Celebrate @celebratesoaps https://t.co/GuAT3XFbto

Next, on Wednesday’s new episode of B&B, Sally Spectra (Courtney Hope) will put her self-worth on full display for Wyatt Spencer (Darin Brooks). As B&B viewers know, Sally and Wyatt have gotten back together, but Sally wants to take things slowly. She was truly hurt after Wyatt broke up with her and immediately got together with Flo. She wants to be back together with Wyatt, but she also wants to take things slowly this time around.

It looks like Wyatt and Sally will spend some time together, and Wyatt will have a big request of Sally. He’ll want her to move back into the beach house and live with him again. But it seems that Sally will balk at the idea. After all, it wasn’t that long ago that Wyatt had Flo living with him. It looks like Sally will want to slow things down a bit, and she just might tell Wyatt no for now.

After all, Sally might want to make Wyatt work for the luxury of living with her once again. B&B spoilers say that Wyatt will realize just how much Sally believes in herself and he’ll get a reminder of her strong sense of self-worth. Perhaps Sally will tell Wyatt that she wants to enjoy dating for a while before she’s sure about living together again. And good for Sally!

The Bold and the Beautiful Spoilers: Thursday, January 23 – Sally Starts…

The Bold and the Beautiful Spoilers: Eric Sides With Brooke? Forrester Patriarch…

The Bold And The Beautiful Spoilers: Thomas And Steffy’s Spat – Thomas Makes Her A…