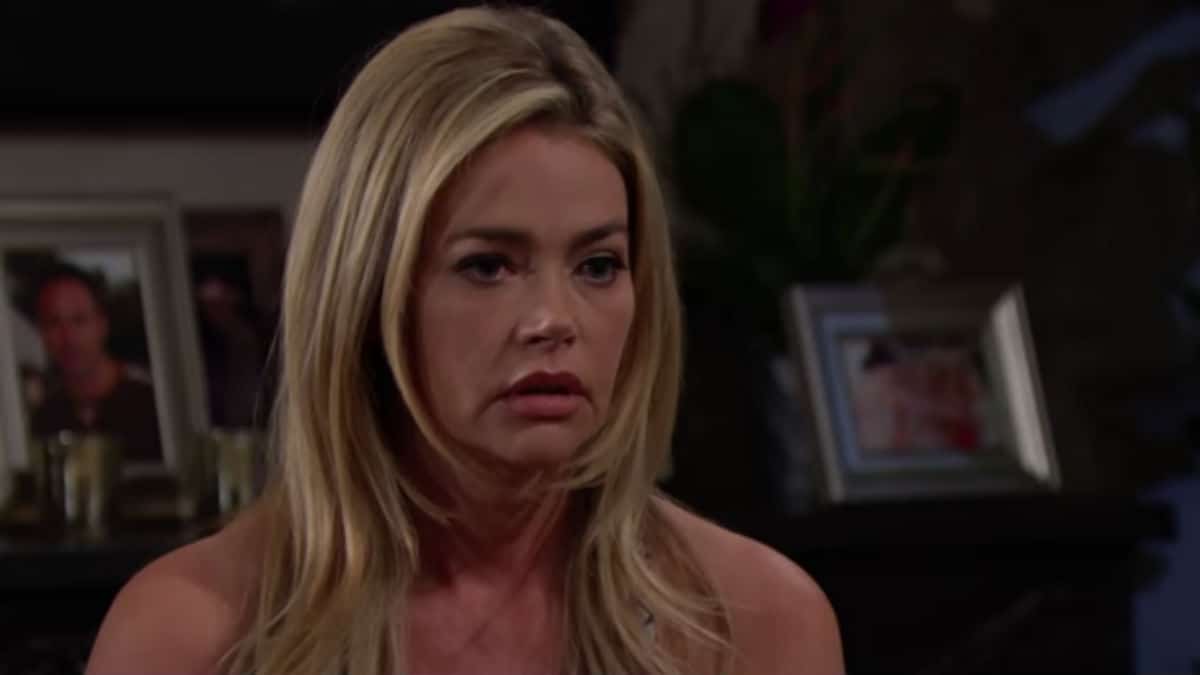 The Bold and the Beautiful spoilers for Wednesday, August 28, tease that Flo Fulton (Katrina Bowden) will get a visitor as she sits in jail. Her mother, Shauna Fulton (Denise Richards) will come for a visit to check up on her daughter and see how she’s doing. As B&B viewers know, Flo was recently arrested for her crimes in connection with Reese Buckingham’s (Wayne Brady) kidnapping of Beth Spencer (River Davidson and Madeline Valdez) and the illegal adoption that followed. Now she’s sitting in jail, most likely awaiting arraignment.

According to B&B spoilers, Shauna will be heartbroken to see her daughter in jail. Shauna is a doting mom who just wants the best for her daughter, and she never thought that Flo would wind up in jail. But Flo will probably be charged with conspiracy, participating in a fraudulent adoption, and obstruction of justice on multiple counts. She knew that Beth was kidnapped and said nothing about it, and she also knew that Thomas Forrester (Matthew Atkinson) was involved in Emma Barber’s (Nia Sioux) death and kept quiet about that, too.

On Wednesday’s episode, look for Shauna to offer her daughter emotional support as they visit in jail. Shauna will probably feel terrible that she’s unable to post bail for Flo, and she won’t like seeing her daughter being treated like a criminal by the justice system. Ongoing B&B spoilers indicate that Shauna will soon turn to her old friend Quinn Forrester (Rena Sofer) for assistance in getting Flo released from jail.

Of course, Quinn will probably want to help Shauna, since Quinn absolutely loves Flo, but will she really be able to post Flo’s bail? After all, Quinn is married to Eric Forrester (John McCook), which means she has ample resources but also means that it would be difficult for her to get Eric to agree to help Flo. We’ll see if Quinn eventually manages to get Flo sprung on bail.

Meanwhile, on Wednesday’s new episode of B&B, Ridge Forrester (Thorsten Kaye) will find himself in utter disbelief of his wife Brooke Forrester (Katherine Kelly Lang). As B&B viewers know, Hope Logan (Annika Noelle) just recounted her version of what happened on the cliff at Steffy Forrester’s (Jacqueline MacInnes Wood) house, and she stated that Brooke misread the situation and that Thomas wasn’t threatening her at all. Rather, Hope said that Thomas was trying to apologize.

Of course, that’s completely different than the version of events that Brooke told Ridge. According to Brooke, Thomas was grabbing Hope and standing over her threateningly, and Brooke felt like she needed to intervene and get Thomas off of Hope. Well, it seems that Ridge is going to be quite upset with Brooke now, and he may even accuse her of seeing what she wanted to see due to her deep feelings of animosity toward Thomas.

#BoldandBeautiful Wednesday spoilers tease Ridge will turn his back on Brooke and Shauna will visit Flo in jail. Read below for more #BB updates ⬇️⬇️⬇️⬇️⬇️https://t.co/IpBiAlDzVc

Brooke will probably be stunned by Hope’s version of events, and she’ll have to come to terms with the fact that she misinterpreted the situation. That will be difficult for her to deal with, and she may find herself in disbelief that she could have done something so rash in response to something that ended up being a misunderstanding.

And then there will be the possibility of legal charges against Brooke. It probably won’t be long before Detective Alex Sanchez (Jeremy Ray Valdez) comes along and wants to question Brooke about Thomas’ fall, and Hope will have to give her account of the incident. That, plus what Ridge saw and Brooke’s history of animosity toward Thomas may put her in legal jeopardy.

At any rate, look for some serious resentment on Ridge’s part toward Brooke on Wednesday’s B&B episode, as their marriage starts to crumble before their eyes and Ridge turns his back on Brooke.