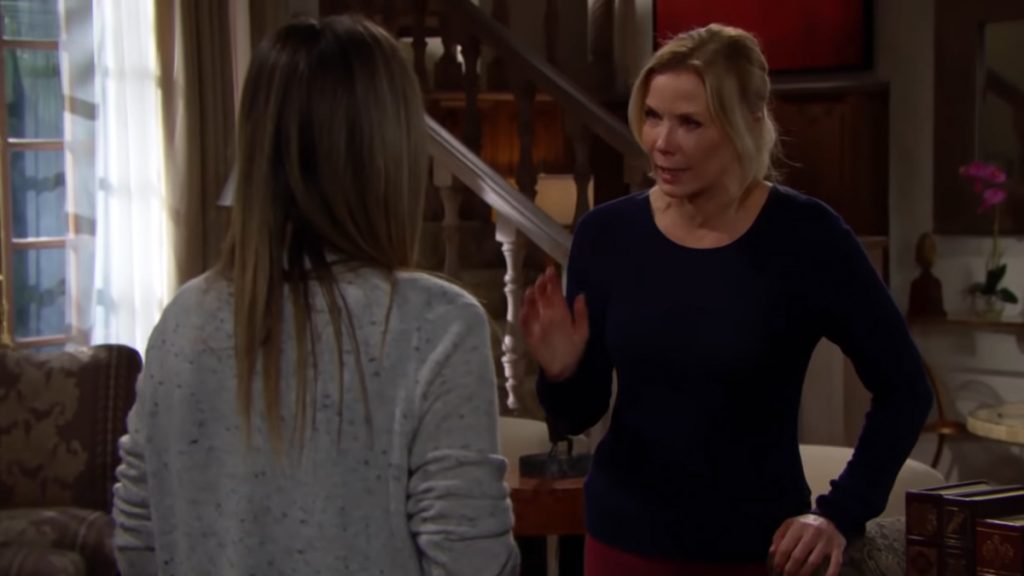 The Bold and the Beautiful spoilers tease that Brooke Logan Forrester (Katherine Kelly Lang) was right in feeling that Thomas Forrester (Matthew Atkinson) was a threat to her daughter, Hope Logan (Annika Noelle), Douglas Forrester (Henry Joseph Samiri), and others. However, some of the methods she felt compelled to use to counter her husband’s son arguably crossed the line of marital trust.

Realizing what Brooke sparked, Ridge Forrester (Thorsten Kaye) feels that the issues he’s been having with his wife may be irreparable. Now, with Thomas seemingly missing, Kaye’s frantic character feels betrayed.

Those surrounding Bridge have greater perspectives than each half of the couple. The audience is, of course, the most objective. Fans see that Brooke’s position has been tenuous for months.

After initially sensing that Thomas was off-center, upon his return from New York, Brooke was willing to give him some leeway because he’s Ridge’s son. However, Thomas’ growing obsession with Hope wasn’t normal and proved to not represent healthy love.

Ridge took Douglas from Hope and Liam Spencer (Scott Clifton) a few weeks ago. Thomas hadn’t been with his son since the cliff-fall incident and was banned from Brooke’s house due to the fallout of the Beth Spencer (Madeline Valdez and River Davidson) reveal.

Brooke’s initial adoption suggestion involved Thomas voluntarily relinquishing his parental rights to Hope. Atkinson’s character was seemingly on the way to doing so before Ridge stepped in and organized a living arrangement for four Forrester males at his dad’s estate.

Hope’s adoption compromise was more palatable because Thomas retained his parental rights. She wasn’t being generous, but merely intended to front that angle in an attempt to eventually gain full custody of Douglas.

The brilliantly scripted, presented, and played vat-fall scene projects Thomas as plausibly dead. But without a body he can be considered missing.

Hope believes she accidentally killed Thomas. Brooke is in full parental-protect mode and Ridge is suspicious of both Logan’s.

He knows that they despise his son and that Brooke has already tried to kill him, or at least that’s what he perceived at the time. Now, whenever Hope’s role in this event is learned, Ridge will go wild.

In the meantime, devoted soap fans will enjoy the drama and wait for Thomas’ inevitable return. He seems likely to have somehow cheated death again and will be geared to seek revenge, or maybe, legitimate redemption.