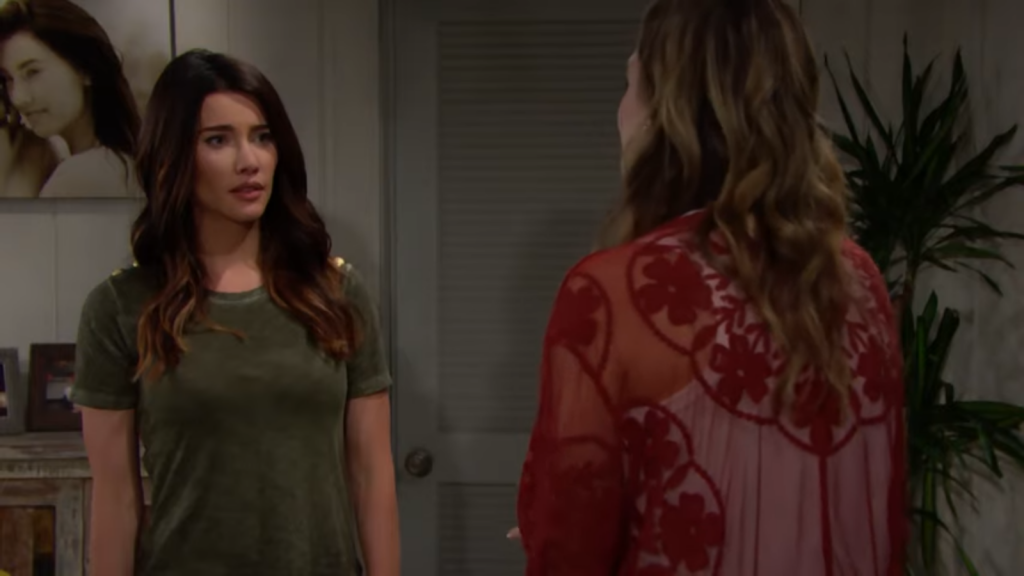 The Bold and the Beautiful spoilers for Tuesday, October 22, tease that Liam Spencer (Scott Clifton) and Hope Logan (Annika Noelle) will have a chat after their visit to Steffy Forrester’s (Jacqueline MacInnes Wood) house. As B&B viewers know, Hope and Steffy had a colossal argument over Liam’s future plans, during which Hope indicated to Steffy that she Liam were going to be a family along with Beth Spencer (River Davidson and Madeline Valdez) and Douglas Forrester (Henry Joseph Samiri).

Of course, that took Steffy by surprise, since Douglas belongs to her brother Thomas Forrester (Matthew Atkinson). But to Hope it all seemed to make sense, and she wants nothing more than for Douglas to become a permanent part of her family with Liam. Well, on Tuesday’s episode of B&B, Hope will have a serious talk with Liam, during which she asks him to raise Douglas with her, as part of their family with Beth.

It looks like Liam may be a little taken aback by the request, but it is probably something that he saw coming. After all, he did previously agree to help Hope keep Douglas as far away from Thomas as possible. Liam might worry that Thomas will retaliate or make it difficult for them to accept Douglas into their home, but it looks like in the end he’ll agree to do whatever he can to help Douglas.

Next, on Tuesday’s new episode of B&B, Thomas will learn some alarming news. He’ll somehow find out that Brooke Forrester (Katherine Kelly Lang) and Hope are plotting to keep him away from Douglas. Of course, Thomas has long known that Douglas is living in Brooke’s mansion, but now that Ridge Forrester (Thorsten Kaye) has moved out of the mansion, that changes things. Douglas is now under the care of Brooke and Hope, and it seems that Thomas will suddenly realize that this puts Douglas directly under their control.

According to B&B spoilers, Thomas will go rushing over to Brooke’s mansion, and it looks like he’ll wind up in the cabin along with Brooke, Hope, Liam, and Douglas. That should make for an interesting interaction, especially since nobody but Douglas will want Thomas there. Brooke will surely make her feelings about Thomas’ presence known when she can, and Thomas will probably give back as good as he gets.

Ongoing B&B spoilers indicate that this will be a lead-up to a major altercation that will take place later in the main house between Brooke and Ridge. Of course, once Thomas gets wind of the plot to take Douglas from him, then it won’t be long until Ridge finds out as well. B&B viewers can expect an explosive scene as Ridge learns that his estranged wife is out to keep his grandson from Thomas.