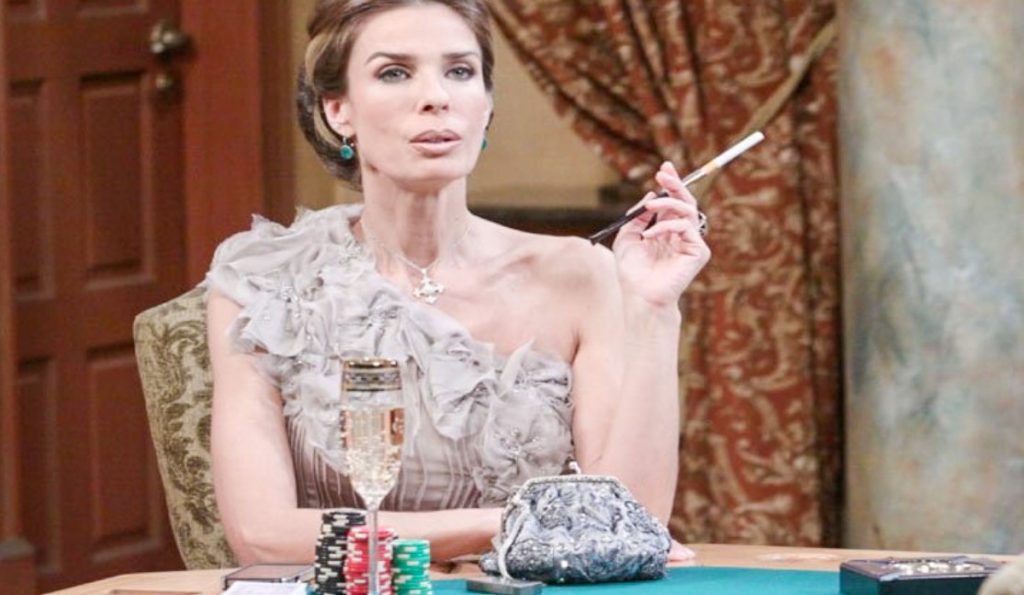 Days of Our Lives (DOOL) spoilers tease that Dr. Wilhelm Rolf’s (William Utay) grand plan for Hope Brady (Kristian Alfonso) is well underway. As DOOL viewers know, he performed some sort of minor procedure on Hope with a scalpel in his hospital lab after rendering her unconscious. And ever since, Hope hasn’t quite been herself. She’s been feeling exhausted and now she’s starting to behave like Princess Gina Von Amberg (Kristian Alfonso) once again. It seems that the Princess Gina personality hasn’t quite taken over yet, but she’s inching closer to a full takeover of Hope’s psyche.

Well, according to DOOL spoilers, the Princess Gina personality will soon be out in full force, and Hope will be acting very strangely to those who love her. She’ll find herself in the DiMera mansion, walking off with Stefano DiMera’s (Joseph Mascolo) portrait. DOOL viewers might remember that the real Princess Gina – who actually existed and looked like Hope – was an infamous art thief for Stefano back in the day, so it would make sense that Hope (now believing she’s Princess Gina) might run off with a work of art – especially one depicting Stefano!

DOOL viewers may also remember that the real Princess Gina was also deeply in love with John Black (Drake Hogestyn) in the early 1980s. She fell in love with John and the two of them planned a life together, but when Stefano took John from her in 1985 (this was when John then assumed the identity of Roman Brady), she fell into a deep depression. According to DOOL spoilers, the current-day Hope (as Gina) will again seek out John and fixate on him.

And that should lead to some interesting moments. John is, of course, happily married to Marlena Evans (Deidre Hall), and Hope is good friends with both Marlena and John. But soon John and Marlena will notice some very strange behavior on Hope’s part. They’ll catch her smoking, which is something that Princess Gina did, and it looks like Hope will take a big interest in John. She’ll be harboring romantic feelings toward him, which will just be plain awkward all the way around.

At any rate, things are going to get pretty bizarre with Hope/Gina going forward. It seems that Rolf will have some master plan for her, which could involve some illegal activities, including theft. Since Princess Gina’s got quite the criminal history, that could come in useful to Rolf. We’ll see what he has in store for her, but it doesn’t look good.

Of course, there’s also the big DOOL time jump coming in a few weeks, and given where the Hope/Princess Gina storyline will be at that time, it’s possible that Hope could be in Princess Gina mode for some time. Will we see Hope’s stint as Princess Gina last as long as a year during the time jump? Time will tell, but Rolf’s definitely got something nefarious cooking, and Hope/Princess Gina is clearly a big part of it.

But the more Hope takes an interest in John, the greater the chances of Rolf’s plan being detected, so Rolf may want to try to get her to lay off of John. But that could be tough, given that John was the love of Princess Gina’s life. Perhaps John and Marlena will figure out what’s going on with Hope – and hopefully they’ll do so before her Hope personality is quashed forever!

What do you think Rolf’s grand plan for Hope/Princess Gina is? Stay tuned to DOOL and don’t forget to check CDL often for the latest Days of Our Lives spoilers, updates, and news.