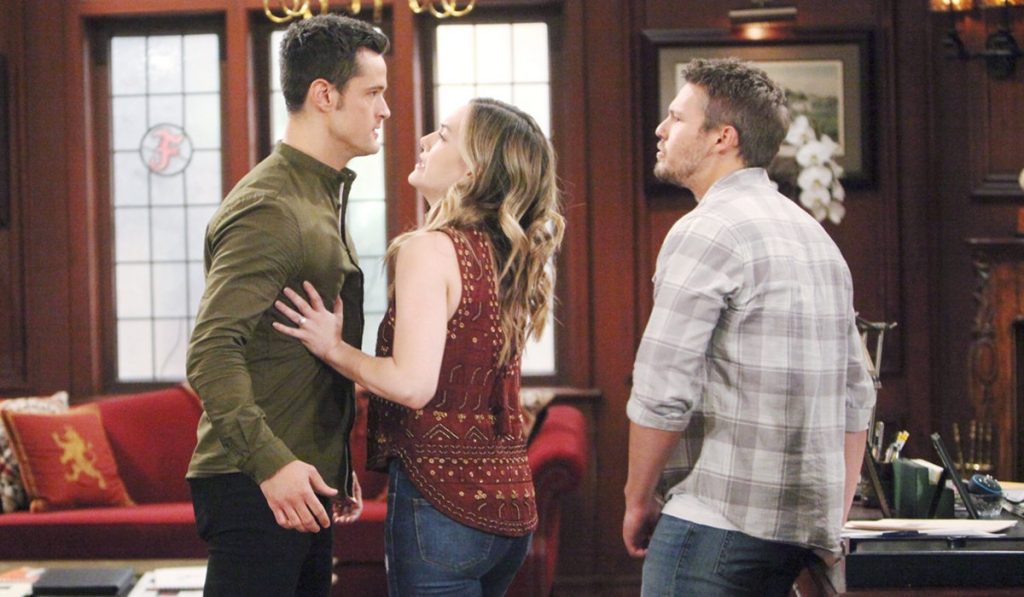 The Bold and the Beautiful spoilers for Tuesday, August 20, tease that Ridge Forrester (Thorsten Kaye) will get some unwelcome attention. As B&B viewers know, Ridge hasn’t been able to reach Thomas Forrester (Matthew Atkinson) ever since the big reveal over Beth Spencer (River Davidson and Madeline Valdez) occurred. Ridge has heard a lot of stories and accusations about Thomas’ threats and his actions on the night of Emma Barber’s (Nia Sioux) fatal car accident, but he doesn’t want to believe any of it.

But on Tuesday’s B&B episode, Ridge is going to get a big reality check. Detective Alex Sanchez (Jeremy Ray Valdez), who was just on hand to arrest Florence “Flo” Fulton (Katrina Bowden), will stick around and want to talk to Ridge about Thomas. It looks like he’ll start by wanting to know if Ridge has seen or heard from Thomas, which of course he hasn’t.

But Detective Sanchez won’t stop there. He’ll let it be known that he’s interested in talking to Thomas about his potential involvement in Emma’s accident, and that will set Ridge on edge. As B&B viewers know, Xander Avant (Adain Bradley) previously told Ridge and Brooke Forrester (Katherine Kelly Lang) that Thomas’ GPS indicated that Thomas not only followed Emma that night, but that he also stopped at the scene of the accident.

Ridge isn’t going to want to give Detective Sanchez any information that could end up implicating Thomas. Ridge would much rather speak to Thomas before the cops get to him and hear the details from Thomas himself. But it looks like he may not have that opportunity, since Detective Sanchez seems to be a step ahead of him.

Meanwhile, on Tuesday’s new episode of B&B, Hope Logan (Annika Noelle) will find herself in need of legal assistance. All Hope wants at this point is to get her life back with Liam Spencer (Scott Clifton) and Beth, but there are some legal steps she needs to take first.

First, she’ll seek out Justin Barber’s (Aaron D. Spears) help in ending her marriage to Thomas. Hope won’t want to stay married to Thomas any longer than she absolutely has to. Of course, since Thomas is currently missing and hiding out with his buddy Vincent Walker (Joe LoCicero), it will be difficult to process the annulment right away, but at least Justin can get the process started.

The Bold and the Beautiful Spoilers: Deranged and Dangerous Thomas Loses His Son? Logans Ready To Take Douglas https://t.co/eD5lcY0UbL pic.twitter.com/6rSyXFJrbZ

According to B&B spoilers, Hope will also ask Justin to help her to undo Beth’s adoption to Steffy Forrester (Jacqueline MacInnes Wood). Both Hope and Liam want to make things official, and right now, Beth is known legally as “Phoebe Forrester.” They’ll want to change her name to “Beth Spencer” and get her a legitimate birth certificate, and that will take some legal wrangling.

Unfortunately, there will probably be a lot of time and paperwork involved to undo the adoption, even though it was a fraudulent transaction. After all, Reese Buckingham (Wayne Brady) falsified numerous documents and records, and it will take some real effort to get everything nullified and give Hope and Liam legal rights to their daughter.

The good news is that Reese is now in custody and it looks like he and Flo can provide statements to indicate that the adoption was illegitimate. Even so, Hope and Liam will want to get everything nailed down so that Beth is legally recognized as their daughter and they can get on with life.