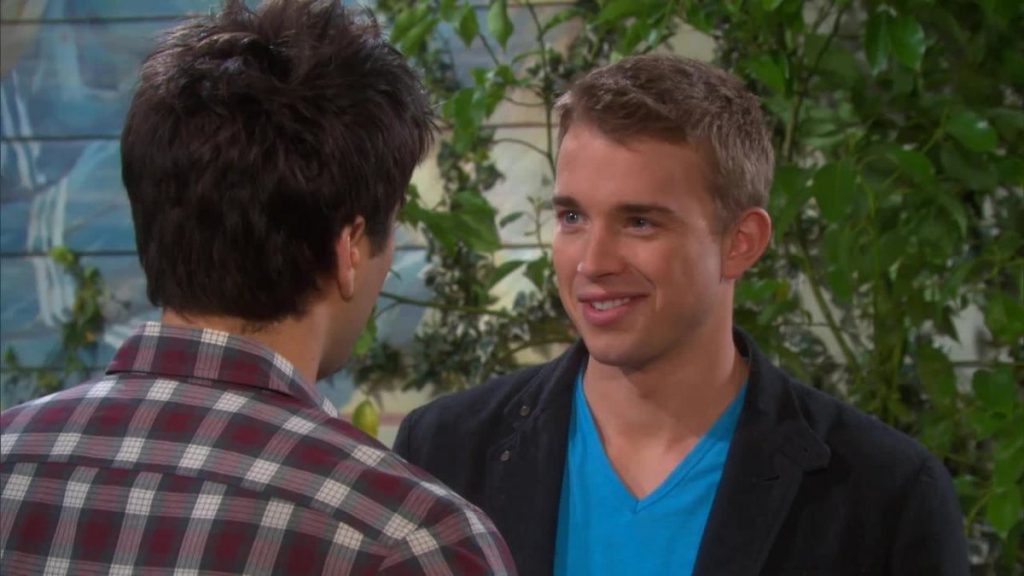 Days of Our Lives spoilers for Tuesday, August 20th finds Will Horton (Chandler Massey) telling Brady Black (Eric Martsolf) that he thinks Kristen DiMera (Stacy Haiduk) might still be alive and better yet, that she’s lurking somewhere in Salem. Also, Will and his partner Sonny Kiriakis (Freddie Smith) take a look inside a box that belongs to Xander Cook (Paul Telfer). Gabi Hernandez (Camila Banus) is shocked to see Kristen’s face. Here’s what you need to know.

It begins with Will warning Brady that his crazy ex is back in town. And for Brady, this makes sense. That’s because after he slept with Nicole Walker (Arianne Zucker), he noticed that she had a scar in the same place that Kristen had on her body, too. Plus, there’s no denying that something seems to be off with Nicole lately, but Brady just can’t put his finger on it.

Meanwhile, Will and Sonny are doing whatever they can to oust Xander from the mansion. They know that whatever he’s doing behind the scenes, he’s up to no good. So they decide to take matters into their own hands and look around his room. They find a box that belongs to Xander. Inside, it appears as though Kristen has been paying Xander to do jobs for her. For Will and Sonny, this doesn’t make much sense, seeing how Kristen is supposedly dead. The two men decide to investigate the matter even more.

Gabi is shocked to see Kristen’s face. The two had an all-out brawl that resulted in Gabi tearing off Nicole Walker’s (Arianne Zucker) wig and her face. Stefan DiMera (Brandon Barash) happened to walk in on all of the action. Seeing how she can’t let Gabi out of her sight now, Kristen decides to put both Gabi and Stefan in the spare room of the mansion. However, it won’t take very long for both Gabi and Stefan to out maneuver and outwit an unsuspecting Kristen.

Elsewhere, Kate Roberts (Lauren Koslow) decides to move forward with her new job offer. This won’t sit very well with Gabi, who will feel as though her position at the top of DiMera Enterprises is being threatened. Also, Brady tells Eric Brady (Greg Vaughan) that he is looking to take his relationship with Nicole to the next level.

Even though Eric has moved on with Sarah Horton (Sarah Godfrey), he’s shocked to hear this. Clearly, he still has some left over feelings for Nicole. Also, Sarah won’t be too happy about this either, as this will threaten her happiness with Eric. Of course, fans will have to tune in for all of the action!