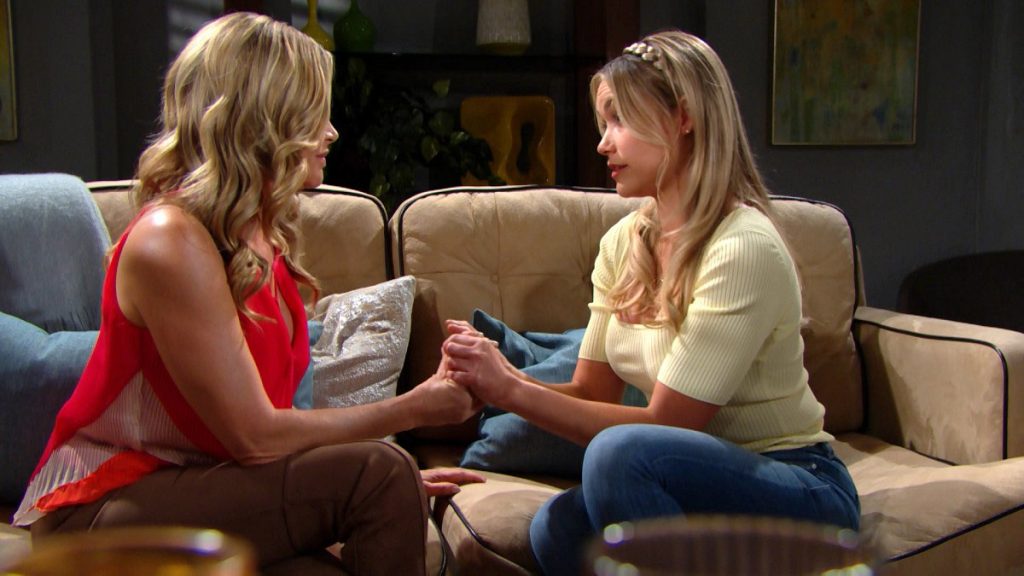 The Bold and the Beautiful spoilers for Thursday, September 19, tease that Shauna Fulton (Denise Richards) will have a big request for her old friend Quinn Forrester (Rena Sofer).

As B&B viewers know, Shauna and Quinn recently had a tense discussion, during which Shauna asked Quinn to help get her daughter Flo Fulton (Katrina Bowden) out of jail. But Quinn was horrified by the things Flo had done to the Forrester family, and she promptly refused to help.

Bold & The Beautiful Spoilers – Shauna Fulton Has A Big Request

Well, according to B&B spoilers, Shauna will come back around to Quinn with another favor, but this time it won’t have anything to do with getting Flo out of jail. As B&B viewers know, Flo was sprung from jail and all charges against her were dropped as part of an immunity deal that Ridge Forrester (Thorsten Kaye) signed off on. Flo is now a free woman with a big goal: to seek forgiveness from those she’s harmed, especially from the man she loves, Wyatt Spencer (Darin Brooks).

On Thursday’s episode of B&B, look for Shauna to ask Quinn for help in getting Wyatt to forgive Flo. That will be a big request, since it doesn’t look like even Quinn has forgiven Flo yet, but still Shauna will persist. And she’ll soon learn from Quinn that Wyatt has gotten back together with Sally Spectra (Courtney Hope). That will dismay Shauna, who only wants the best for her daughter, which she believes is Wyatt.

So, Shauna will look for Quinn’s assistance in getting Wyatt to end up with Flo, and not Sally. Now, Quinn may not be entirely happy with what Flo has done, and it may take her a while to forgive Flo, but she would probably much rather see Wyatt end up with Flo than with Sally. As B&B viewers know, Quinn can’t stand Sally, so we’ll see if she ends up agreeing to help Shauna with this endeavor.

Meanwhile, on Thursday’s new episode of B&B, Flo will pay Wyatt another visit. As B&B viewers know, Flo went to see Wyatt right after she was first released from jail on the immunity deal. She wanted to explain herself to Wyatt, and he was kind to her but firm in letting her know that they were over as a result of everything she did to his family. Wyatt just can’t believe that Flo ran such a destructive con on Steffy Forrester (Jacqueline MacInnes Wood) and led Hope Logan (Annika Noelle) and Liam Spencer (Scott Clifton) to believe that their daughter had died.

Well, it seems that Flo will gear up to have another big talk with Wyatt. But this time, she’ll not only apologize for her transgressions, but she’ll profess her love for Wyatt. She’ll want him to know that despite everything she did, she still loves him and would like to be with him. Of course, B&B viewers know that he’s since gotten back together with Sally, and he’ll probably let Flo know that, which should be pretty devastating for her.

But B&B spoilers also say that Wyatt will show Flo some compassion. He’ll be kind to her and probably let her down gently, and it’s very unlikely that he will reciprocate her feelings given his relationship with Sally. But will he make it absolutely clear that Flo doesn’t stand a chance, or will he wind up inadvertently giving her hope that there still could be a future for them?