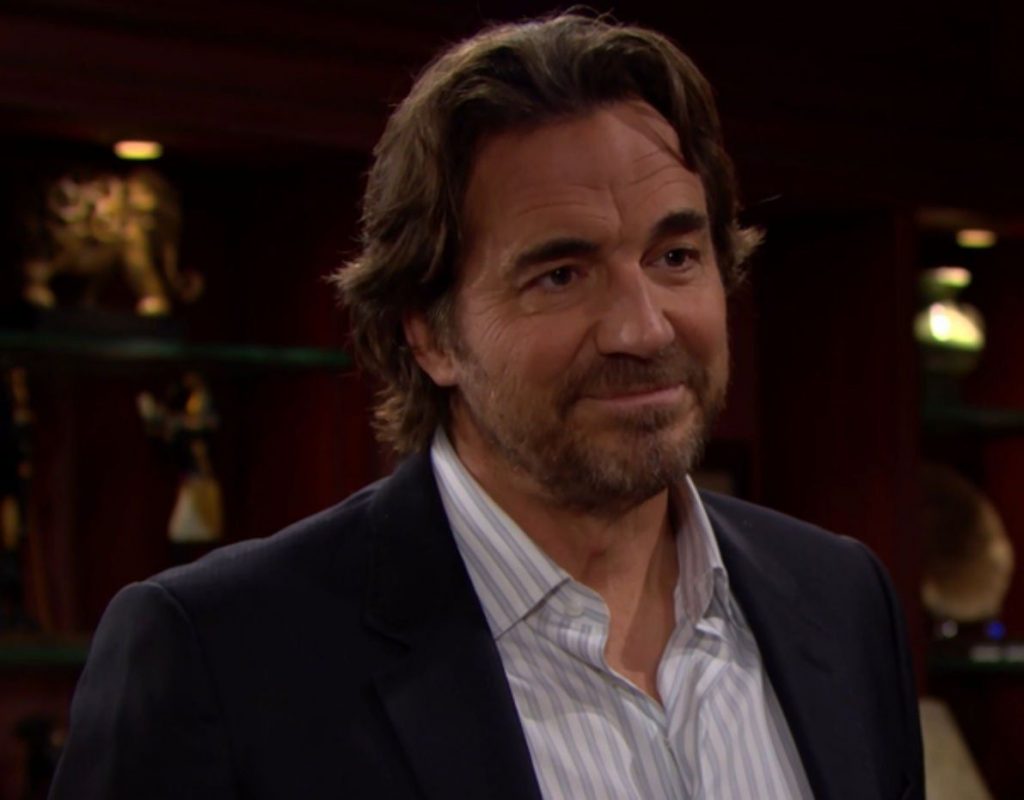 Ridge Forrester (Thorsten Kaye) remains loyal to his son on ‘The Bold and the Beautiful’. He also feels it’s necessary to withhold information from his wife, Brooke Logan Forrester (Katherine Kelly Lang).

Befuddled priorities doomed Thomas Forrester (Matthew Atkinson) this summer. Now, his father may be trapping himself in a similar fashion. Yes, that was a wink at Forrester Creations, where all three characters are connected by business and their personal ties.

Thomas has a history of going off the rails. What he needs now is therapy sessions, likely prescribed medication, and a daily schedule that must be strictly followed and include observation by a number of willing parties.

The decisions that Thomas made regarding his pursuit of Hope Spencer (Annika Noelle), which was her name at the time, were misguided. But what he did after forcing Flo Fulton (Katrina Bowden) to tell him the truth about the girl who was being called Phoebe Forrester (Madeline Valdez and River Davidson) was truly outrageous.

Brooke was trying to get through to Ridge for months. But he wouldn’t hear what she was saying. Then, when the truth came to light, Ridge did something that stunned his wife.

Kaye’s character believes he’s supporting Thomas by shielding him from legal justice. This choice includes allowing Flo to receive an immunity deal, where she served only days in jail for all that happened and faces no further punishment. Brooke can’t tolerate that, told Ridge Thomas was banned from her home, and got into a major verbal fight with her husband that led him to an awkward encounter with Flo’s mother.

Shauna Fulton (Denise Richards) and Brooke surely didn’t bond. Instead they had it out after Shauna went to Brooke’s gorgeous estate and asked her to forgive Flo.

Lang’s iconic character, one of only two originals (along with John McCook’s Eric Forrester) to remain from B&B’s 1987 debut, is known to defend her family and turf. She did both when physically pushing Shauna out the front door.

Shauna then happened upon a liquid-fueled Ridge at Bikini Bar. She later helped him to a previously unknown second floor room, where Ridge slept off his state of mind.

Upon his awakening the next day, Shauna initially played coy. But she was forthright in the end, telling Ridge that nothing happened. Shauna also agreed to keep their secret, as Brooke might not believe Ridge’s recant, and would surely be mad even if she did.

Bold And The Beautiful Spoilers – Bridge Can Find Common Ground

There are various common ground solutions that Ridge could pursue at this point. One would seem to soothe Brooke’s understandable stance. Ridge could ask her if she would help monitor Thomas at work.

As referenced above, Thomas clearly needs oversight. While Ridge should abide by Brooke’s decision that Thomas live elsewhere for the time being, she should accept his ongoing presence at FC as a way to keep him on a productive path. Having Brooke directly oversee what he’s doing would allow her to monitor his behavior and hopeful growth.

The above scenario would enable Brooke to be part of Thomas’ redemption. Though this assumes she is willing to accept this responsibility and remain open to her husband.

The Bold And The Beautiful (B&B) Spoilers: Justin Barber Goes To The Dark Side…