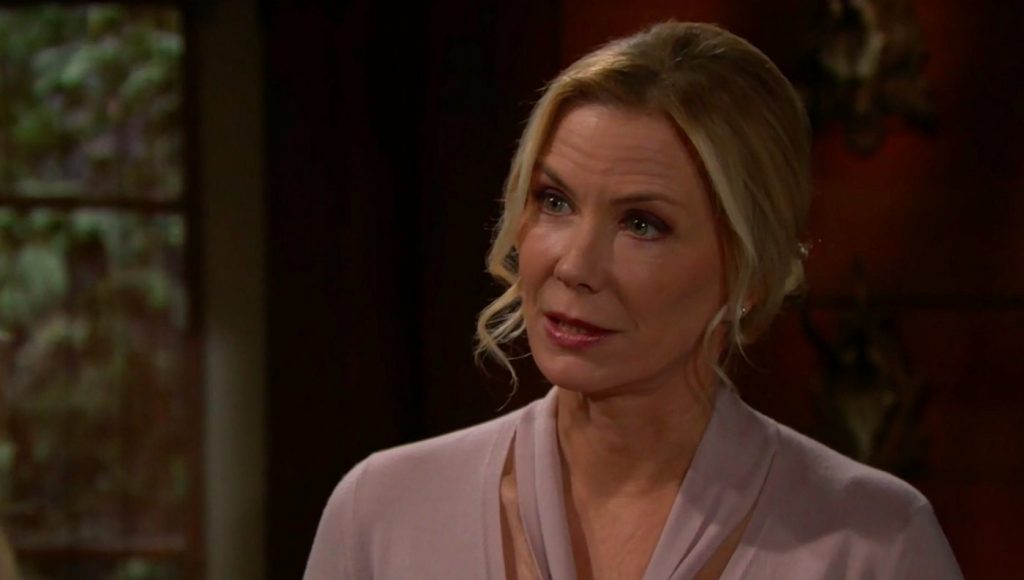 The Bold and the Beautiful spoilers reveal Brooke Logan Forrester (Katherine Kelly Lang) is determined to keep Shauna Fulton (Denise Richards) away from her family. She confronts the Vegas vixen and threatens her. Ridge Forrester (Thorsten Kaye) overhears and is embarrassed. Could his love turn to loathing as Brooke’s behavior pushes him closer to the enemy?

After the kidney donation reveal, Brooke confronts Flo Fulton’s (Katrina Bowden) mother. She gives the woman a warning to stay away from her family. This includes keeping her distance from Ridge. Of course, Shauna puts on an innocent act, making her appear to be the victim of an unprovoked verbal assault.

Brooke thought that the conversation was private. What she didn’t realize is that her husband, Ridge was nearby. He heard everything Brooke said and looked embarrassed by his wife’s behavior. He tried to apologize for Brooke’s actions and even attempted to justify it. But deep inside, he is at a loss at what to do to neutralize the situation.

The Bold and the Beautiful spoilers suggest that Ridge feels powerless. Not knowing what to do, he has tried to play peacemaker. However, his attempts to do so have failed. He still loves Brooke, but her actions are just pushing him away. It almost seems like Ridge is giving up on his quest for peace — and perhaps also giving up on his marriage.

B&B spoilers tease that the pushier Brooke gets, the more it pushes away Ridge. She is trying to stop Shauna from stealing her husband. What she doesn’t understand is that her behavior is having the opposite effect. What makes it even worse is how Shauna isn’t engaging Brooke. It is a smart move on Shauna’s part because it makes Ridge see the Vegas vixen as a victim, which has Brooke looking like an out of control drama queen.

If Brooke continues acting out, then Ridge could eventually have enough. When and if that happens, then Brooke won’t be saving her marriage. Instead, she will just be pushing Ridge closer to Shauna. As of right now, it appears that Shauna is winning.