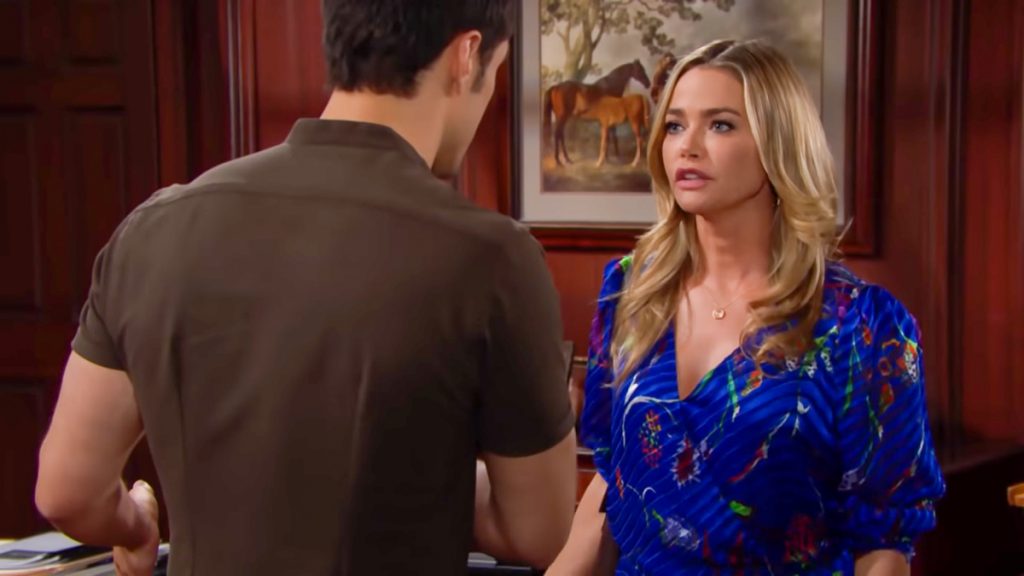 The Bold and the Beautiful spoilers for Friday, October 18, tease that Shauna Fulton (Denise Richards) will pass on some difficult news to Ridge Forrester (Thorsten Kaye). As B&B viewers know, Shauna and Ridge recently spent the night together at Bikini Bar. Ridge was passed out drunk, and while she was watching over him, Shauna planted a big kiss on him, which he reciprocated but didn’t remember until Shauna told him about it later.

Unfortunately, Thomas Forrester (Matthew Atkinson) overheard Shauna telling Ridge about the kiss, and he later confronted Shauna about it. On Friday’s B&B episode, Shauna will decide that Ridge needs to know that Thomas knows about the kiss, so she’ll seek out Ridge and lay the news on him. Of course, Ridge won’t be thrilled to know that the secret’s out, since this is a detail that he’d like to prevent Brooke Forrester (Katherine Kelly Lang) from knowing about.

Unfortunately for Ridge, Thomas is probably going to see to it that Brooke finds out about the kiss one way or another, since Thomas is determined to break up Brooke and Ridge at all costs. Thomas doesn’t like the fact that Brooke tries to run Ridge’s life, and he especially doesn’t like it that Brooke wants to keep him from his son, Douglas Forrester (Henry Joseph Samiri). It’s probably just a matter of time before Brooke learns the truth about the kiss.

Next, on Friday’s new episode of B&B, Liam Spencer (Scott Clifton) will need to give Steffy Forrester (Jacqueline MacInnes Wood) an answer to her big question. As B&B viewers know, Steffy has just asked him whether there’s still a chance for the two of them. This came after Liam waffled and looked confused when she said something to indicate that things were over between them.

Of course, B&B viewers know that Liam is now back together with Hope Logan (Annika Noelle), so he’ll likely let Steffy know that. But he’ll probably also let her know that he’ll always be there as a father to Kelly Spencer (Chloe Teperman and Zoe Pennington) and that she’ll be able to count on him always. This probably won’t come as much of a surprise to Steffy, since she hasn’t really counted on Liam coming back to her.

The Bold And the Beautiful Spoilers: Will Thomas Lose Custody of Douglas? https://t.co/9WpY7pyFLH

Finally, Steffy will have a major argument with Hope on Friday’s B&B episode. According to B&B spoilers, Hope will find out that Liam took Beth Spencer (River Davidson and Madeline Valdez) to Steffy’s house, and she’ll be upset. This may lead to an argument between the two women. Whatever the impetus for tor argument, one will definitely ensue, during which Hope and Steffy compare their respective losses of Beth and Liam.

Unfortunately, this argument probably won’t do much to foster a happy blended/extended family between Hope, Steffy, Liam, and the girls. In fact, it looks like things will get pretty heated between Hope and Steffy, and there will probably be an even bigger wedge between them now.