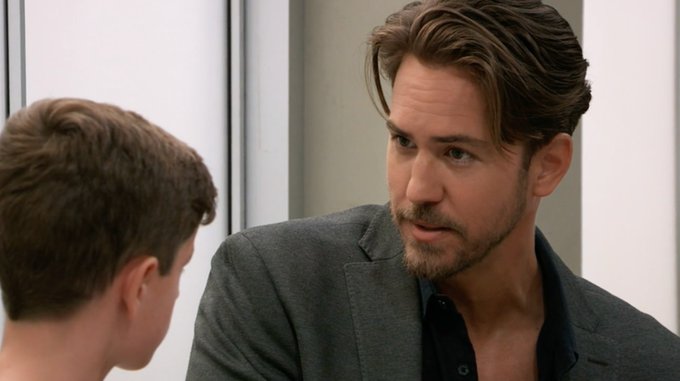 General Hospital (GH) spoilers tease that Peter August (Wes Ramsey) is going to find himself getting deeper and deeper back into his old criminal ways, thanks to a blackmailing Shiloh Archer (Coby Ryan MacLaughlin). It seems as if he is behind both Andre’s (Anthony Montgomery) attack and for Drew’s (Billy Miller) plane going down. Surprisingly he didn’t seem that upset about taking a human life, so maybe he was never as redeemed as he appeared.

So far, Peter has managed to hide the fact that he was more involved than he let on during the time Jason was prisoner. He had convinced most of Port Charles that he was no more than Faison (Anders Hove) and Helena’s flunky (Constance Towers). Most of Port Charles has accepted Peter as the law abiding publisher of the Invader. And this is mostly because Maxie (Kristen Storms) has completely accepted him into her life. And slowly they fell in love.

But General Hospital spoilers has recently revealed that Maxie has fallen for Peter without knowing the entirety of his criminal acts. They said “I Love You” for the first time and this should have been the best time in his life. But any joy Peter should have felt was marred by the fact that he is under Shiloh’s blackmail. But the things he is doing to hide his past are pretty awful in their own right and should be what Maxie finds harder to forgive.

General Hospital Spoilers – The Past was one thing…but…

Peter doesn’t seem to realize that the things he is doing now is even worse than what he is trying to cover up. But the even bigger problem may very well be what he is doing now to cover his crimes up. He ordered a hit on poor Andre and seems to be the party responsible to Drew’s plane crash. What’s worse is that he didn’t seem to have much remorse. Luckily, Andre survived but it doesn’t seem as if Drew is so lucky. His blood may very well be on Perer’s hands.

Maxie stopped Peter from coming clean about hid past or Shiloh’s blackmail. And while it’s true that she had no idea just how far his past crimes were mostly covered up, it’s more like she will not be able to forgive what he’s doing now. At this point, he’s willingly done worse than anything he had done before. But it’s also true that Maxie is very forgiving. One only has to look at the times she and Lulu (Emme Rylan) have seemingly irreparably ended their friendship?

One never knows what will happen in Port Charles. This is the city where a serial killer has been free and (mostly) forgiven for his past crimes. General Hospital spoilers tease that the couple with have to deal with his deception at some point. Will that mean the end for the newish couple? Will Peter become a full out villain like his father was? There are a lot of exciting things coming up on General Hospital so make sure you watch the ABC soap weekdays to find out what the future will bring!

The Young and the Restless Spoilers: How Will Victor Let Adam Know He’s Not Dead?