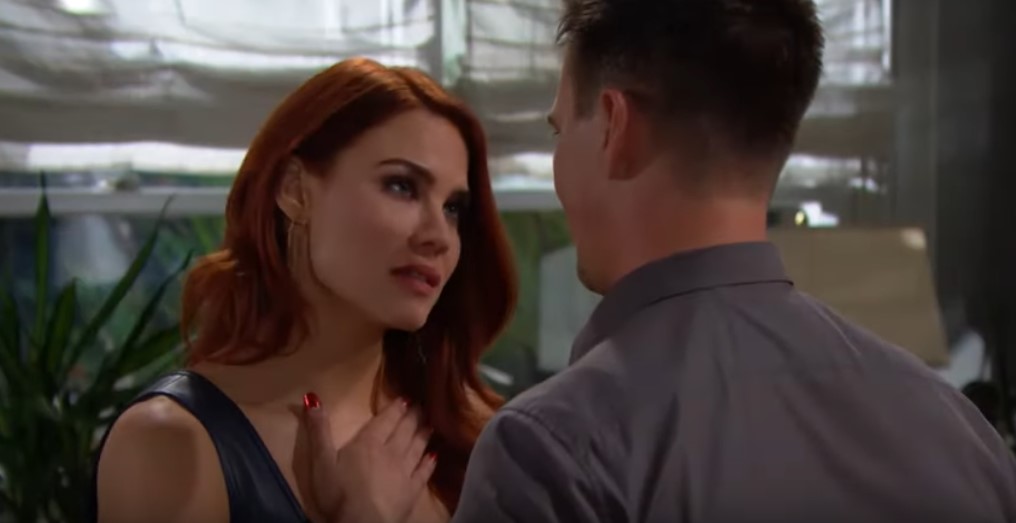 The Bold and the Beautiful spoilers for Monday, September 23, tease that Sally Spectra (Courtney Hope) will be completely taken off guard. As B&B viewers know, Wyatt Spencer (Darin Brooks) just got down on bended knee and proposed to her.

Sally had just opened up to Wyatt about how she felt unlucky in love and how she felt that she may always be the one who didn’t get the guy. Wyatt sensed that Sally needed to see just how committed he felt toward her, so he just up and proposed.

On Monday’s B&B episode, Sally will take in this grand gesture, and she’ll have a big decision to make – but will she say yes or no to Wyatt? Knowing Sally, she’ll probably want to talk through exactly why he proposed and address the big elephant in the room – Wyatt’s lingering feelings for Flo Fulton (Katrina Bowden). Of course, Wyatt has just met with Flo moments before Sally showed up, and Flo’s picture montage of all of her and Wyatt’s good times did get to Wyatt.

Sally will probably want to make sure that Wyatt is sure about wanting to spend the rest of his life with her, and that he is really over Flo. After all, it wasn’t that long ago that Wyatt was ready to make a life with Flo. Of course, that all changed when Wyatt found out about the big con that Flo ran on his brother, Hope Logan (Annika Noelle), and Steffy Forrester (Jacqueline MacInnes Wood). But still, it’s reasonable for Sally to think that Wyatt may still have some feelings for Flo.

So, will Sally ultimately say yes to Wyatt’s proposal? We think there’s a good chance she will, if she truly believes that Wyatt is over Flo and isn’t just proposing to make her feel better about their relationship. She’ll want to see that Wyatt is truly ready to be her husband, so we’ll see whether Wyatt’s able to convince her of that.

Meanwhile, on Monday’s new episode of B&B, Bill Spencer (Don Diamont) will be feeing powerless. As B&B viewers know, Katie Logan (Heather Tom) collapsed after having not been feeling well. Now Katie is unconscious and unresponsive, and Bill will be completely panicked. It looks like Bill will immediately call 911, and Katie will be rushed to the hospital by ambulance.

Katie will then wind up at the hospital, where she’ll be evaluated by Dr. Jordan Armstrong (Vincent Irizarry), who will launch a mission to find out what’s ailing Katie. It appears that Katie will remain unconscious, and according to B&B spoilers, Bill will profess his love and devotion to Katie, and even though she’s unresponsive and in bad shape, he’ll tell her exactly what she means to him and to Will Spencer (Finnegan George).

Katie’s family will eventually be notified, and they’ll arrive on the scene to join Bill and offer him support. And eventually, Bill and the family will be told that Katie is in kidney failure and has a grim prognosis. Both of her kidneys will be compromised, and she’ll be in need of a donor immediately. Of course, given that Katie has other health issues, including having a donor heart, that will complicate things greatly.