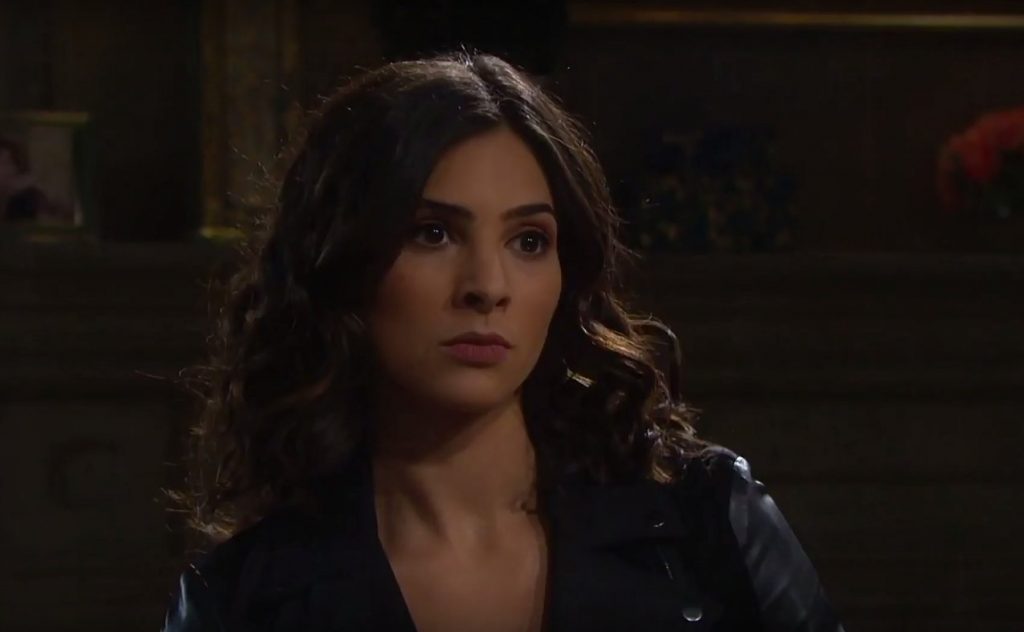 Days of Our Lives Spoilers – Gabi Hernandez DiMera Is Torn

Gabi Hernandez DiMera (Camila Banus) is torn when Will Horton (Chandler Massey) asks her if Vivian Alamain (Robin Strasser) shot his grandmother, Kate Roberts DiMera (Lauren Koslow). Will is the father of Gabi’s only daughter, Arianna Horton (Harper and Sydnee Udell) while Vivian is her husband, Stefan DiMera’s (Brandon Barash) mother. Stefan wants the two most important women in his life to get along, and he wants Gabi to cover up for the crimes of his mother, even though he doesn’t agree with them either.

Days of Our Lives viewers will recall that after Vivian bragged to Stefan about shooting Kate and burying her that he confiscated her beloved pistol, which she named “Belinda”! Then when she found out Kate survived by clawing her way out of the grave and making it to Salem University Hospital, she disguised herself as a surgeon and made her way into Kate’s hospital room, squeezing the air tubes she was hooked up to, therefore depriving her of oxygen.

She still didn’t quite manage to kill Kate but she did go into a coma. Stefan found her doctor disguise and again chastised Vivian, and as they were arguing, Will was at the DiMera mansion with his ear to the door! He is pretty sure from what he heard that Vivian is the culprit, but wants Gabi to confirm it!

Brady Black (Eric Martsolf) confesses to Sonny Kiriakis (Freddie Smith) that he is having a very difficult time resisting the charms of Kristen DiMera (Stacy Haiduk) who has been trying to win him back by any way possible! She’s tried seduction, she’s tried convincing Brady that she is trying to reform herself by doing some good deeds, she tried getting him drunk! Brady and

Kristen were once engaged many years ago but it didn’t work out and Kristen never got over him, it appears that Brady has some baggage for Kristen as well but is in denial of it, and Kristen can tell! Sonny may not be able to do much but lend Brady an understanding ear, but he will surely advise him that Kristen is bad news and not to fall for anything she does or says to try to get him back!

Meanwhile, Kristen is demanding that her former partner in many crimes, Xander Kiriakis (Paul Telfer) help her win back Brady! Xander will be sure to put up some resistance, not being sure what, if anything he could do to change his mind.

However, she did suggest to him that if she could get Sarah Horton’s (Linsey Godfrey) embryo, which she is thinking of aborting, transplanted into her own womb than she could try convincing Brady that it’s his baby and trying to get him to do the right thing and marry her because of the baby! Xander himself wants to get with Sarah and Kristen will use that as leverage over him to get him to comply with her demands, to be sure!

Meanwhile, Lucas Horton (Bryan Datillo), Kate’s son, will be torn deciding whether to take his mother off life support or not. The fact that his cousin, Julie Williams (Susan Seaforth Hayes) needs a heart transplant and is too old to be on the traditional heart transplant list may be a factor in his decision; he may have Dr. Kayla Johnson (Mary Beth Evans) run some tests to see if Kate would indeed be a donor match for Julie, and that may influence his decision about his mother’s life support options.