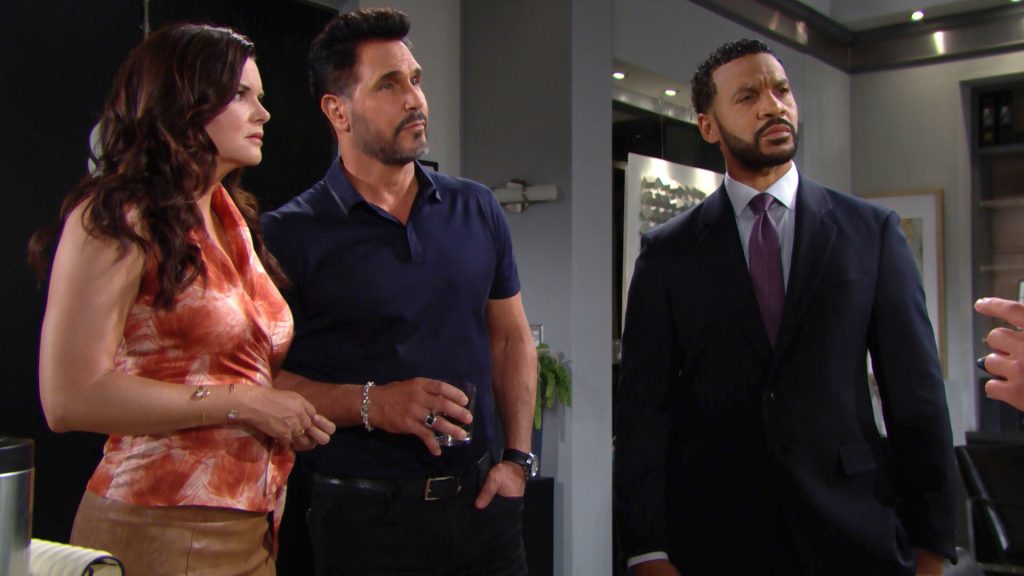 She stayed home from an outing to the park with Bill and Will Spencer (Finnegan George) because she was feeling sluggish and had a backache, which is unusual for Katie, who usually jumps at the chance to spend time with her family.

Well, on Friday’s episode of B&B, things will get pretty scary as far as Katie’s health is concerned. According to B&B spoilers, she’ll be feeling pretty lousy, and Bill will be quite worried about her.

It looks like he’ll have some work commitments that need to be addressed at the office, but Katie will be feeling so badly that he’ll make the conscious choice to stay with her rather than deal with work. Bill will sense that Katie needs him, and he’ll make the time for her.

As it turns out, it will be a good thing that he’s there for her, because B&B spoilers indicate that Katie will take a turn for the worse. She’ll end up collapsing and losing consciousness, and Bill will be completely panicked. He won’t have any clue as to what’s going on – all he’ll know is that Katie wasn’t feel well earlier. From there, Katie will likely be rushed to the ER.

Ongoing B&B spoilers indicate that Katie will be in very ill health, as the doctors will eventually realize that she’s in total kidney failure, and from there it looks like the search for a donor will be on. There are bound to be some scary moments for Bill and the rest of Katie’s family as they wait and hope for the best.

Meanwhile, on Friday’s new episode of B&B, Ridge Forrester (Thorsten Kaye) will wind up making a big promise. As B&B viewers know, Ridge and his wife Brooke Forrester (Katherine Kelly Lang) have been at odds recently over what to do about Ridge’s son, Thomas Forrester (Matthew Atkinson). Thomas is due to be released from the hospital soon, and Brooke doesn’t want him coming back to the mansion or being anywhere near Douglas Forrester (Henry Joseph Samiri).

Of course, Ridge doesn’t feel that he should ban Thomas from his own home, and he certainly doesn’t feel that Thomas should be kept away from Douglas. Ridge knows that
Thomas has done some terrible and unforgivable things, but he doesn’t think that Thomas is an unfit father by any means. The whole situation has caused a big rift between Ridge and Brooke.

Ridge makes a promise to Brooke and Katie collapses on Friday's #BoldandBeautifulhttps://t.co/vQxOBEagWb

Well, on Friday’s B&B episode, Ridge will make a big promise that may prove difficult to keep. Exactly what the promise remains to be seen, but chances are it will have something to do with Thomas and what happens after his release from the hospital. Perhaps Ridge will promise to keep Thomas from being alone with Douglas out of respect to Brooke, or perhaps he’ll promise to keep him away from Hope Logan (Annika Noelle).

Whatever the case, B&B spoilers indicate that it will be a promise that Ridge will ultimately have difficulty keeping. What do you think that promise will be?